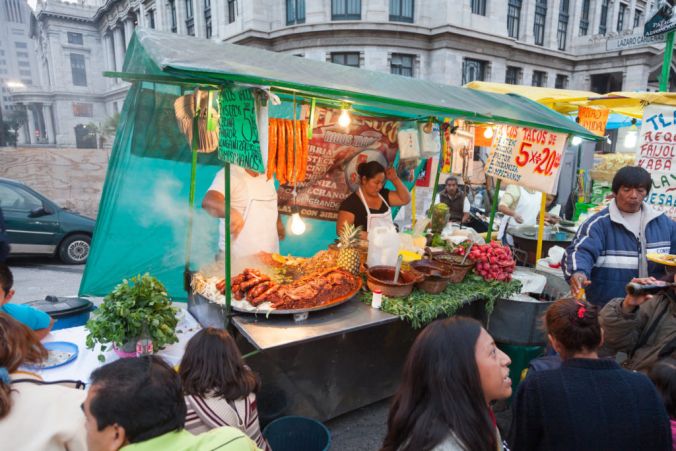 People eating and socializing at a vibrant food market stall in Mexico City.

With the Covid vaccine rollout underway, we can finally start looking ahead to when we’ll be able to (fingers crossed!) start travelling again.

If you’re the sort of traveller who likes to be guided by their taste buds when choosing where to venture next, why not set your sights one of the street food capitals of the world?

Sampling authentic eats from kerbside vendors is a delicious – and affordable – way to really soak up the sights, sounds and flavours of a place, and there are plenty of countries both near and far where you can do just that. Here are eight of the tastiest street food destinations on the planet…

Formerly known as Saigon, Vietnam’s second city is littered with hole-in-the-wall eateries where patrons perch on tiny plastic stools while munching their meals. Newbies should make sure they slurp a steaming bowl of pho (pronounced ‘fuh’) noodles in broth, and tuck into banh mi – crusty baguettes filled with all manner of meats, crunchy pickles and seasonings.

You want heat? You’ve got it in Mexico City, where you’ll discover a whole lot more than burritos and fajitas. Tacos al pastor stuffed with succulent pork should be your first port of call, before branching out into more adventurous fillings, like cow brain, tongue and even eyeball.

Of course you can get world-class kebabs in the historic Turkish city, but there’s much more besides in the foodie-friendly Karakoy and Ortakoy neighborhoods. Start your day with coffee and a freshly-baked simit, a sesame-encrusted bread ring sold by vendors from distinctive red and white carts.

Food hawkers are so revered in Singapore that ‘hawker culture’ has now been inscribed on the UNESCO Representative List of the Intangible Cultural Heritage of Humanity. That’s a lofty title, yet street food in the island nation is anything but pretentious, even if some sellers have been awarded Michelin stars for their efforts.

Spice-lovers will be in heaven wandering down Mohammed Ali Road, the street food epicentre of Mumbai and home to reportedly the best biryanis in the city.

There’s more to Indian cuisine than just curry, however. For a tasty munch on the go, be sure to try the hugely popular vada pav, a double-carb delight of fried potato dumpling served in a white bread bun.

Naturally you’ll want to inhale as much mind-blowing pizza as you possible can during a visit to the Eternal City, but be sure to leave room for trapizzino (a kind of stuffed pizza pocket), suppli (deep-fried rice croquettes) and porchetta (pork from a whole roasted pig) served in a bun.

Daring gastronomes will get a real kick out of the Hong Kong street food scene, where spongy curry fishballs and ‘stinky tofu’ (that’s the actual name of the fermented bean curd dish) are par for the course.

Other surprisingly delicious dishes include skewers of deep-fried pig intestine and cow offal. You know what they say: don’t knock it till you’ve tried it.