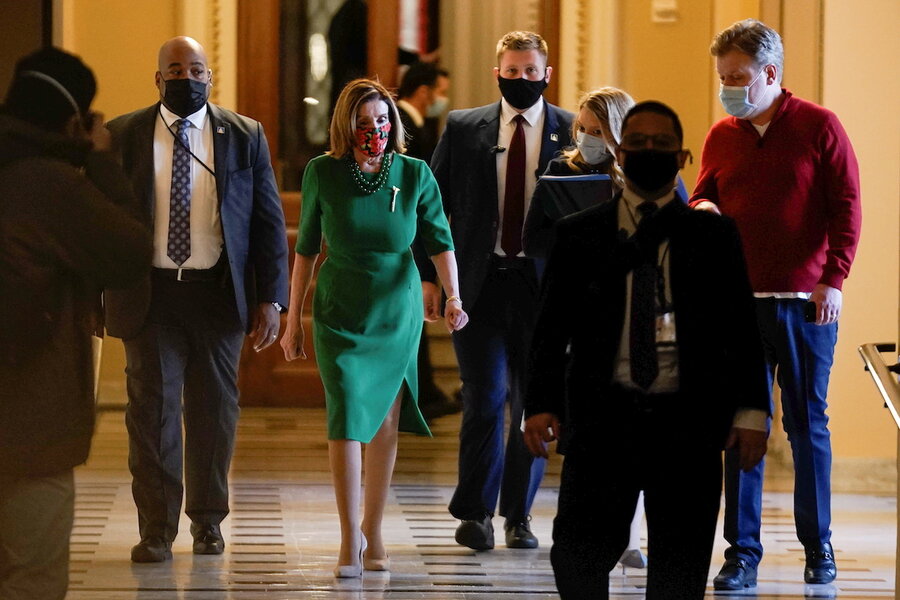 President-elect Joe Biden’s decision to tap several House Democrats for administrative positions is putting Speaker Nancy Pelosi in a politically tough spot, having chiseled away at the party’s already slimming majority and leaving her potentially without enough votes to pass his legislative agenda.

Democrats already were heading into the new Congress with a razor-thin margin over Republicans. But Mr. Biden’s overture to a third lawmaker, Rep. Deb Haaland, D-N.M., as the history-making first Native American interior secretary, set off a fresh round of pained conversations on what to do. Ms. Pelosi will start the Biden era with a narrow majority, 222-211, with a few races still undecided.

At 222-211, a majority would be 218 votes. That number would fluctuate amid vacancies, but Democrats’ challenge is to not only keep their majority, but also give themselves wiggle room to pass a bill in case their caucus isn’t completely united behind it.

But Ms. Pelosi’s leadership team has a plan.

“We need to manage something like this,” Rep. James Clyburn, of South Carolina, the Democratic whip and a top Biden ally, said in an interview with The Associated Press this week.

According to Mr. Clyburn, an emerging strategy is to stagger the confirmations: Mr. Biden would hold off on formally submitting the nominations all at once so the House numbers don’t immediately drop.

Under the plan, timing would unfold over the first several months of the new Congress, ample time for the House to pass the 100-days agenda, a typically important but symbolic legislative sprint that through the beginning of Mr. Biden’s presidency.

Mr. Biden’s first pick from the House, Rep. Cedric Richmond, D-La., would join the administration quickly once the president-elect is inaugurated Jan. 20, Mr. Clyburn said. Mr. Richmond is poised to become a senior adviser, a position that doesn’t require confirmation by the Senate.

Mr. Biden would then wait to submit the other two nominees, Ms. Haaland and Rep. Marcia Fudge, D-Ohio, who was tapped as housing secretary, until after the March special election in Louisiana to fill Mr. Richmond’s seat.

The lawmakers can remain in the House, voting as members, until they are Senate confirmed. Their nominations could be sent one after the other, in the months that follow.

The three House seats are in Democratic strongholds and expected to be off-limits to Republicans. But special elections can throw curveballs, and the staggered timing would also give the campaigns ample running room to shore up the candidates and races.

Democrats are already deep into political soul-searching after a dismal November outcome for House Democrats. Mr. Biden’s victory had short coattails as they lost seats and saw their majority shrink.

Moderate lawmakers and strategists blamed progressives for pushing the party’s message too far leftward; progressives complained it was centrists who ran timid campaigns without a bold message to attract voters.

Ms. Pelosi is a master vote counter on the House floor, but even her skills will be tested in the new Congress, starting with her own election for another term as speaker. If even a few Democratic lawmakers object or peel off, passing bills in the new Congress could be difficult.

In an extreme scenario, Republicans could even try to wrest control of the gavel and the majority. If the numbers dipped so low – with illnesses or other absences, which are likely during the COVID-19 crisis – Republicans could try to force a floor vote on the issue.

Rep. Tom Cole, R-Okla., said Friday that the departures of the three lawmakers would combine with existing divisions among Democrats to make governing “very hard” for Ms. Pelosi.

“On any given vote when your margin is as narrow as this, a few people can be mad about something totally unrelated to the vote and just take it out on you,” Mr. Cole said.

“I thought it would be difficult if, in fact, members of the Congress were selected,” Mr. Hoyer told reporters this week. “The margin was very close.”

A similar scenario has played out in the Senate, where Mr. Biden has refrained from naming senators to administrative positions because of the narrow GOP hold.

The Senate breakdown will be 51-48 when the new Congress is sworn in Jan. 3, with the majority not yet decided until two Jan. 5 runoff elections in Georgia. One of the runoffs involves a sitting Republican senator.

In some ways, the closely split House could provide an opportunity for Mr. Biden to reach across the aisle and try to cut bipartisan deals with a centrist agenda that could attract some Republicans.

But so far, House GOP leader Kevin McCarthy has signaled movement in the opposite direction. He wants to use floor procedures as political weaponry to gum up the bills with Republican priorities and force vulnerable Democrats into tough votes.

Republicans used the strategy with some success in the current session of Congress, producing campaign ads against Democrats seeking reelection. Mr. McCarthy, his own shot at seizing the majority for Republicans in 2022 now within reached, warned shortly after the November election there would be more floor battles to come.

Mr. McCarthy said while Republicans won’t have the majority in the new year, they will “run the floor.”

To block those efforts, Democrats are considering rules changes proposed by Rep. Stephanie Murphy, D-Fla., that would raise the threshold on those votes to a two-thirds majority to make it more difficult for Republicans to change the bills.

Yet the first legislation of the new Congress may not be too difficult for Ms. Pelosi to pass, even with a slimmer majority.

The agenda is likely to be rooted in H.R. 1 through H.R.9 – the first nine bills of the last Congress – popular Democratic measures on voting rights, lowering prescription drug prices, raising the minimum wage, and requiring background checks for gun purchases – measures that most Democrats have already voted for.