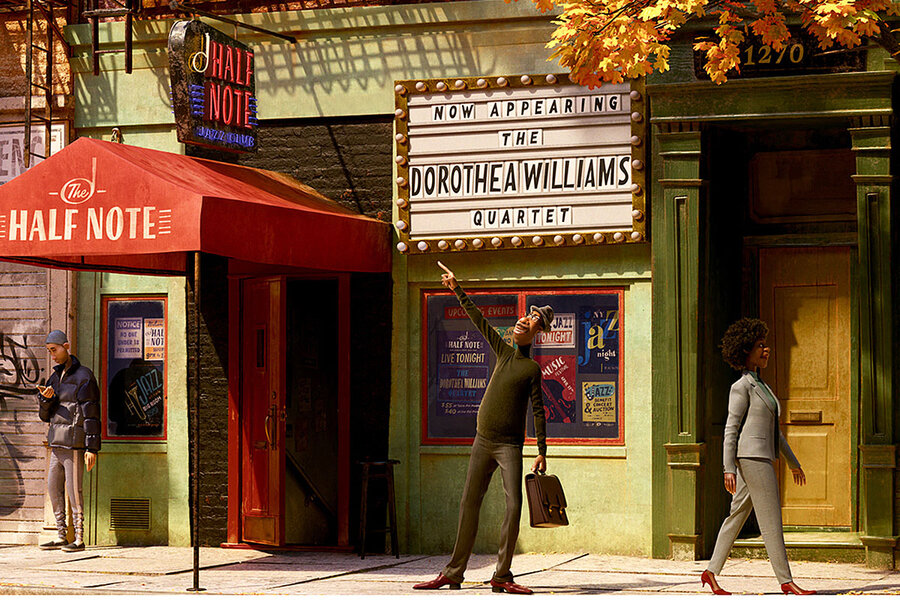 The story follows a New York City jazz pianist, Joe (voiced by Jamie Foxx), who feels as if his life has amounted to nothing. But on the eve of what promises to be a major career break, he is fatally injured. Joe’s soul enters a realm that iconic Pixar character Buzz Lightyear might describe as “infinity and beyond.”

“We’re more than just the physical stuff of our bones and skin,” says Mr. Docter, musing on the meaning of the film’s title. “There’s something at the heart of each of us that is the essence of who we are … that goes on after we die.”

In a bid to return to his body, Joe finds his way to The Great Before, an onboarding center for souls preparing to go to Earth for the first time. Joe’s ticket back is mentoring another soul, known as 22 (Tina Fey), who has spent all eternity trying to figure out her life’s purpose.

Like Joe, Mr. Docter knew from an early age what he wanted to do in life. When his fourth grade teacher observed him drawing “Peanuts” cartoon characters, she said, “Why don’t you make some of your own?” Mr. Docter’s first job after college was helping Pixar develop its breakout hit, “Toy Story.”

He won his first Oscar for “Up,” which features a cantankerous older gentleman who ties so many helium-filled balloons to his home that it floats away.

But even with all of his success, Mr. Docter could not shake doubts about his self-worth, which made him feel as untethered as that house. “Soul” grapples with that age-old philosophical dilemma of whether there’s any purpose to life. “We try to make it fun and approachable by dramatizing that in the form of these two characters,” says Mr. Docter. “One who’s basically an essentialist. He believes, ‘I was given this thing of music and that’s what I’m meant to do.’ And then we have this soul who refuses to go down and be born on Earth. She is kind of a nihilist. You know, there’s no point to anything.”

A lifelong Christian, Mr. Docter addressed his anxiety by turning to prayer. Sometimes, he says, just sitting down with his sketchbook to draw something as simple as the front door of a house is a moment of holy communion – a reminder to be present in life rather than mired in one’s negative thoughts. “Soul” doesn’t have any Christian overtones, but its characters have to reframe preexisting ideas of what gives life meaning.

“What we’re all looking for is this idea that we’re not just a lone speck floating around, that we’re somehow connected to something bigger than just us,” says Mr. Docter. “There is an understanding in faith that everyone is worthy and everyone is loved. And that kind of breaks your heart wide open when you can really let that in.”

From H.E.R. to Taylor Swift, women deliver the best songs of 2020