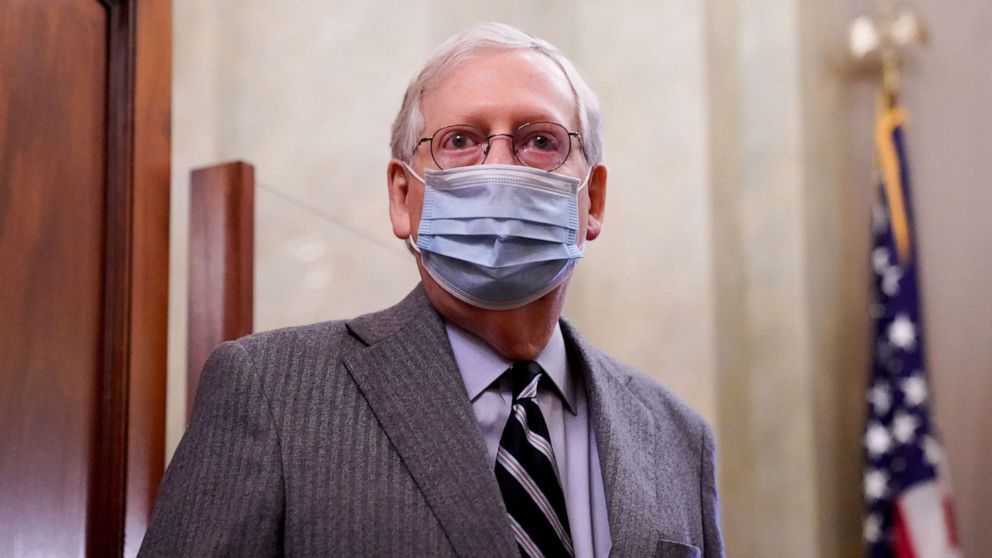 ​Senate Majority Leader Mitch McConnell, speaking on the Senate floor Thursday, said he believes a “bipartisan, bicameral agreement appears to be close at hand” on a COVID-19 relief deal.

“I’m encouraged that our Democratic colleagues have now embraced this framework, that’s been the right solution for our country all this time,” he said.

Lawmakers are working furiously to announce a $900 billion deal ahead of a government funding deadline at midnight Friday, but McConnell warned senators that a short-term funding bill is expected and that it is “highly likely” senators will have to work through the weekend to finish both bills: one for COVID-19 relief and the other a massive $1.4 trillion spending bill.

While a COVID-19 relief deal still must be finalized, it’s expected to include $300 billion for the small business loan program, money for vaccine distribution and testing, education funds, and up to $600 in one-time direct payments for Americans on a sliding scale depending on income levels.

The deal would extend the eviction moratorium and reinstate a federal unemployment insurance supplement, potentially at $300 per week.

The stakes are incredibly high for members of Congress to strike a deal ahead of the new year.

Twelve million people are set to lose benefits if pandemic-era provisions to expand unemployment eligibility expire. Millions across the country could face eviction if a federal moratorium expires at the end of the year.

All this comes as the rising number of COVID-19 cases are taking a toll on the economy: the number of Americans applying for unemployment benefits rose again last week to 885,000 – the highest weekly total since September.

“We made some progress this morning, we are waiting to hear back, but that’s it,” Pelosi said. Asked if a deal could be announced as soon as Thursday, she responded: “We’ll let you know.”

“All three emphasized the urgency to reaching an immediate agreement,” he wrote in a tweet.

The new COVID-19 relief legislation would “repurpose” over $400 billion in unused funds from the CARES Act, which Congress passed back in March – which means this bill will be about $500 billion in new funding if the $900 billion top-line holds.

Democrats acknowledged defeat in getting $160 billion in aid for state and local governments in the deal due to Republican opposition.

At the same time, McConnell has agreed to set aside liability protections for businesses, which he had said was a “red line” for Republicans.

There are still some unresolved issues as well, senators have said, including funding for nutritional assistance, or SNAP benefits.

“I think there’s general, you know, disagreement on a temporary SNAP increase. So we just have to work out the details and there’s other issues to make sure we’re supporting food banks and other ways to get food to people,” Sen. Debbie Stabenow, D-Mich., told reporters Thursday.

Lawmakers are also still haggling over how much funding to include in the bill that would provide targeted support for the restaurant industry and independent live music venue operators, as thousands of businesses struggle to stay afloat after their doors were shuttered due to the raging pandemic.

The COVID-19 relief bill is expected to be attached to a larger omnibus spending deal. McConnell said negotiators are on the “one-yard line” in finalizing the spending bill.

“We are no strangers to December cliffhangers,” McConnell said, adding that government funding “hangs in the balance.”

“In the next few days, Congress will either succeed or fail at providing secure and stable funding,” McConnell said.

He said he is open to passing a short-term funding bill to get the it done.

“We’re going to stay right here, right here, until we’re finished. Even if that means working through the weekend, which is highly likely,” McConnell said.

McConnell closed his remarks with a subtle warning to negotiators, saying, “in my judgment, we’re very close to a point that arises in every major negotiation. It’s the point where each side faces a fork in the road,” McConnell said.

“In short, we’re near the point in this process where we decide if we’re going to stay on the fast track or drift back toward business as usual,” McConnell said. “I say the answer should be obvious.”

On the Senate floor, Schumer signaled that agreement on a COVID-19 bill is close.

“We are putting the final touches on what would be the largest stimulus bill in the history of our country, with the exception of the CARES Act … none of the remaining hurdles can not be overcome,” he said.