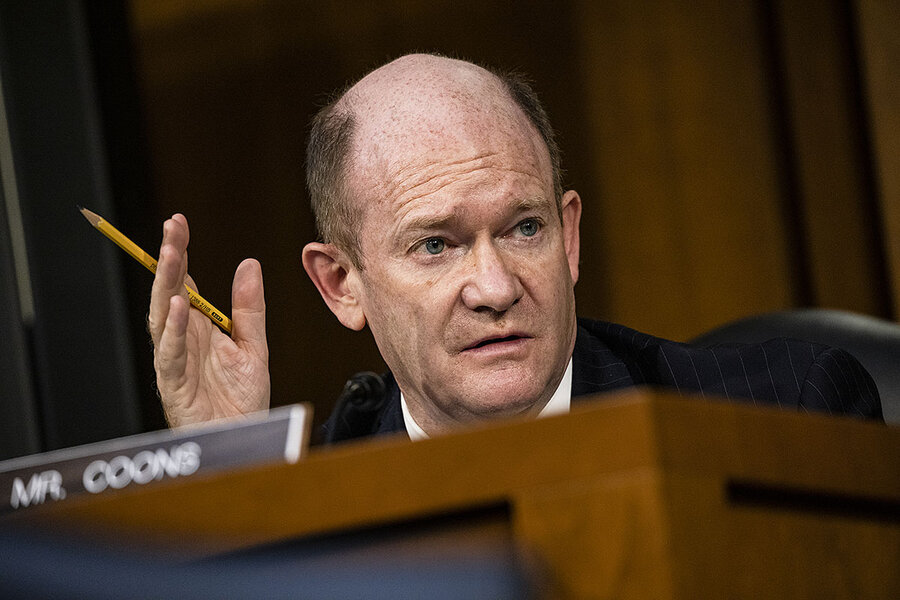 “Frankly, we don’t have a choice,” he says. “This may be our last, best chance to show that we can make the Senate work.”

What follows is an edited, condensed transcript of the interview.

Q: To what extent do personal relationships still matter in Washington?

This isn’t the Senate that Joe left – and it’s certainly not the Senate of 20 or 30 years ago, where senators mostly moved their families here, and socialized and readily worked across the aisle. Throughout the entire presidential campaign, lots of media commentators dismissed Joe Biden’s message of decency and civility and his hope for bipartisanship, and said that just couldn’t work anymore.

But in the real world, that’s what people want from their government – that we would respect each other, hear each other, compromise, and solve problems.

What I hear from my colleagues, both Republicans and Democrats, is they all believe he is a decent and caring man. That stands out, particularly in a place where there are so few chances to build and sustain real relationships. Now he’s going to have a chance to prove that you actually can do it.

Q: President-elect Biden told you he needed you in the Senate, rather than as secretary of state. What do you think your contribution can be for him in the Senate?

I’ll give you an example. I’ve had a series of conversations with John Cornyn. You know, John is a very capable partisan warrior from Texas. He has recently taken to somewhat jokingly calling me his “Ambassador of Quan” [from the movie Jerry Maguire]. He sort of pokes me in the ribs and points other Republicans to me and says, “he’s your Ambassador of Quan – he’s the guy who’s going to help us figure out how to work together.”

Cornyn is someone who is probably going to chair the immigration subcommittee. He’s been a pretty tough hard-liner on immigration.

[But] he had a really good, positive opening call with the president-elect and I’m optimistic that I can help weave together a constructive and positive relationship, and that Dick Durbin [Democrat of Illinois] and John Cornyn can end up making progress on an issue like Dreamers that really has eluded us.

I’m not saying that we’re all going to suddenly be standing arm in arm, singing “Kumbaya” on the floor of the Senate. But if you listen to your colleagues and figure out what they most care about, it is possible to find good partners and get things done.

Q: How did you first come to know Joe Biden? You’ve mentioned him as a mentor. What has he taught you?

I was a law-student intern on the Senate Judiciary Committee 30 years ago. I got to know Joe Biden just a little bit, mostly by watching him during hearings. It’s when I ran for New Castle County council that we first started talking most regularly. He was a New Castle County councilman, and the only other person in Delaware history to go from county government straight to the U.S. Senate.

Most people who run for office for the first time are all excited about their policy platforms. He said, first, you have to listen more than you talk. You have to actually recognize that the people you’re running to represent, they’ve got their policy platform. And it’s probably very direct things like “fix the pothole.” So don’t overthink it. Listen.

But second, you need to know what you’re willing to lose [an election] over.

Here’s his other piece of advice, often repeated: You can always question a Senate colleague’s policy conclusions, but don’t question their motives. When you go to the floor and denounce a colleague as being bought and sold by big tobacco or something, you prevent them from ever being able or willing to compromise with you or work with you, once you’ve questioned their integrity.

Now, having watched today’s remarkable exchange at the Homeland Security Committee hearing about electoral fraud, where Senator [Ron] Johnson of Wisconsin, was yelling at Senator [Gary] Peters that he’s a liar over and over, it’s striking to reflect that Joe could say to me that as of 2000, he wasn’t aware of any time when any of his colleagues had questioned each other’s motives or integrity on the floor of the Senate.

So, I do think the institution is under genuine strain. The last four years have been particularly hard on that front, in terms of a commitment to respect and civility and truthfulness.

Q: You mentioned how the media discounted Biden’s message. Do you think they’re underestimating the desire for normalcy in politics on the Hill?

Absolutely. I have had conversations with a dozen Republicans of all levels of seniority, from the brand new to the seasoned, saying that they’re just relieved – that the last four years have been exhausting. And whether you love him and support him, or you loathe him and find him appalling, one thing Donald Trump was, was a master at holding the attention of our nation and changing it to a new crisis, a new issue, a new challenge every single week, often every day, sometimes within the same day. It was a wild ride.

Lots of members of the Senate of both parties have confided in me that they are looking forward to a little more normal, civil, traditional dialogue between the Senate and the White House. And that, as much as people will have small comments or complaints or concerns about nominees, the one clear thing about the cabinet that Joe Biden is assembling now is this is a very seasoned and experienced group. And that’s going to make for less sudden, unexpected, abrupt changes in direction and policy.

Q: After the caustic Supreme Court nomination hearings for Brett Kavanaugh, you said you were going to redouble your efforts at getting to know your Republican colleagues. Did you follow up on that?

Yes. There are literally a dozen Republicans who will tell you that I have redoubled my efforts. It’s been hard because Bob Corker, Jeff Flake, Johnny Isakson, and John McCain were wonderful partners [who have retired or, in Senator McCain’s case, died]. I got a lot done with them.

It’s been challenging to have to start anew with a bunch of other colleagues. But the best example I can give you is Mike Braun [Republican of Indiana]. Mike’s in his first two years and is literally one of the most conservative people I’ve ever met. Yet he and I have founded and are leading the Climate Solutions Caucus together.

We talk regularly. There are 14 members, seven Republicans, seven Democrats. Even in the midst of a pandemic, we did events every single month, often two a month. Think about it. You got seven Republicans who are publicly saying climate change is real, people cause it, and we urgently need to do something about it.

A part of it is we’re in the prayer breakfast together. And a part of it is I made the effort to go meet with [Senator Braun] and sit down and listen and ask him what he cared about and what he wanted to work on.

When my friend Joe Donnelly was running against Mike Braun, I never in a million years would have guessed I’d be having a productive working relationship with that guy. And yet, here we are.