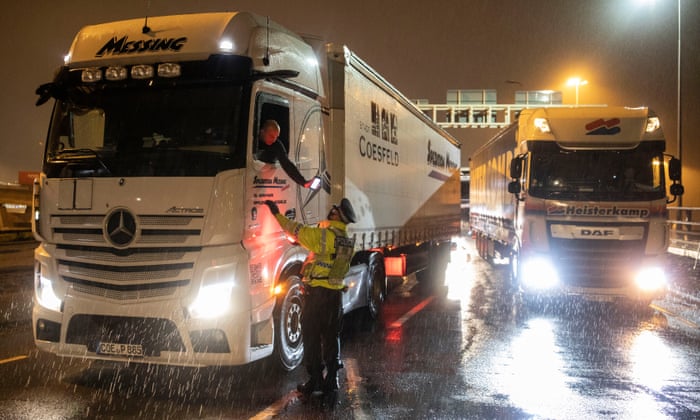 A mass Covid-19 testing programme for lorry drivers is to get under way to relieve congestion at British ports following an agreement to reopen the border between France and the UK.

The Department for Transport made the announcement late on Tuesday, hours after Paris said passengers from Britain could enter France following a 48-hour blockade, aimed at stopping the spread of a new coronavirus variant, that left thousands of HGVs stranded outside UK ports before Christmas.

Rail, air and sea services would resume from Wednesday morning, the DfT said, with all people travelling from the UK into France required to show proof of a negative test taken within the previous 72 hours.

The transport secretary, Grant Shapps, said lateral flow tests, which take about 30 minutes, could be used to test those eligible to cross the French border, but urged hauliers not to travel to Kent until the testing programme was operational.

“I am pleased we have made this important progress with our French counterparts this evening,” Shapps said. “This protocol will see the French border reopen to those travelling for urgent reasons provided they have a certified negative Covid test.”

The French prime minister’s office announced earlier on Tuesday that French and EU citizens in the UK, as well as British and third-country nationals with permanent residence in France or another EU member state, would be able to enter the country, or travel through it, providing they have a recent negative Covid test.

UK citizens or people from third countries with legitimate professional or other reasons for travelling from Britain – including hauliers and other transport staff, diplomats and health workers – would also be allowed into France with a negative test, Paris said.

About 4,000 lorries, and thousands more small vans, were waiting to cross the Channel on Tuesday, with food transport firms warning that potential disruption levels ranged between “a shambles and a catastrophe” just as January and the end of Brexit transition looms. The backlog is likely to take several days to clear.

Elizabeth de Jong, policy director of the transport business group Logistics UK, welcomed the news that the border would soon be open but said it was now “vital that Covid-19 testing procedures be stood up fast” so backed-up traffic could clear.

The ban on freight and passengers was imposed by Paris on Sunday evening in an attempt to contain a newly discovered Covid-19 variant thought to have a growth rate up to 70% higher than previous types.

France and more than 40 other countries had closed their borders to travellers from the UK since. But while the new measures should ease the chaos around Britain’s ports, it is not clear how far the need for a negative test – and fears surrounding the virus variant – will deter haulage firms and drivers.

The agreement to reopen the border came after a day of wrangling over the form of Covid test France would accept, with PCR swab tests felt by London to take too long to return a result – the target time of 24 hours is often missed – while Paris was concerned that rapid lateral flow tests were not sufficiently accurate.

Under the new French measures, which will remain in place at least until 6 January unless reviewed following bilateral UK-France or EU-wide talks, negative tests have to be presented before boarding a train, plane or ferry in the UK, with no possibility to test on arrival.

The agreement also followed a recommendation on Tuesday from the European commission that all 27 member states should discontinue bans on flights and trains from the UK and reopen freight routes to “ensure essential supply chains continue to function”, including for Covid vaccines.

The EU’s executive branch said UK nationals still had the right to free movement until 1 January and “should be exempted from further temporary restrictions provided that they undergo a test or quarantine”. Cargo flows “need to continue uninterrupted … not least to ensure the timely distribution of Covid-19 vaccines”, the commission added.

Brussels warned, however, that at the end of the transition period only “essential” travel would be permitted unless the member states added the UK to a list of countries exempted from restrictions.

Didier Reynders, the commissioner for justice, said: “Given the current uncertainties and in light of the precautionary principle, member states should take coordinated action to discourage non-essential travel between the UK and the EU.

“At the same time, blanket travel bans should not prevent thousands of EU and UK citizens from returning to their homes.”

President Emmanuel Macron and Boris Johnson spoke by phone on Monday about measures to ease the chaos at Britain’s ports after France’s decision on Sunday evening to close its border to all traffic from the UK for 48 hours.

Concerns have been raised about the welfare of lorry drivers waiting to cross the Channel, with one trade body saying drivers had been given only a single cereal bar each despite being stuck in their cabs for more than 24 hours.

Rod McKenzie, the managing director of the Road Haulage Association, told the BBC: “Clearly those drivers have spent a second night parked up somewhere, possibly on a motorway, possibly somewhere else, trying to get across the Channel, and many of them are European drivers trying to get home for Christmas, and their morale is very poor.

“Yesterday, Kent county council offered each of them one cereal bar, which is a pretty poor effort, I think, in terms of maintaining their morale, and their spirits.”

McKenzie said toilet facilities were also a “big issue”, with concerns over health and cleanliness. He added: “We are not treating them well as a country, we are not treating lorry drivers well in these very difficult conditions that they are in at the moment.”