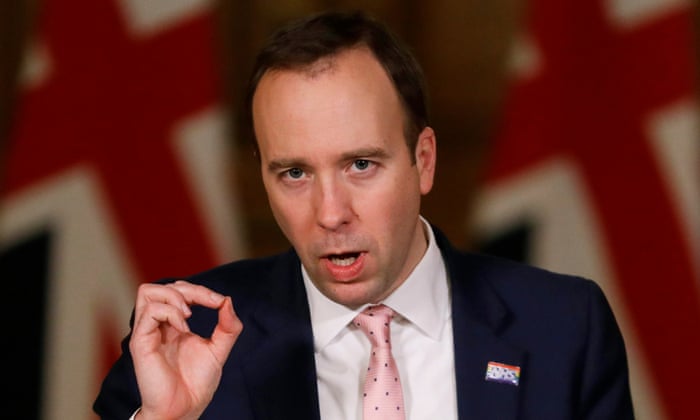 A “highly concerning” new variant of coronavirus that is suspected of fuelling a rise in cases in South Africa has been detected in the UK, Matt Hancock has said.

Surveillance by Public Health England on Tuesday identified two people who contracted the virus after being in contact with separate travellers from South Africa. One case is in London, the other in the north-west.

The health secretary told the Downing Street press briefing on Wednesday that the arrival of the new variant would lead to new quarantine rules for recent visitors from South Africa.

“This new variant is highly concerning because it is yet more transmissible and it appears to have mutated further than the new variant discovered in the UK,” Hancock said.

It heaps more pressure on ministers who are already struggling to contain another highly transmissible form of the virus, which was first detected in Kent in late September. Coronavirus cases have soared in London, the south-east, and the east, where the variant now makes up most infections.

Ravi Gupta, a professor of clinical microbiology at Cambridge University, who has called for the vaccine programme to be accelerated and targeted at hotspots to contain the more transmissible variant said the discovery of the South African variant added fresh urgency to the situation.

“This is really shocking news,” he said. “We need to step up the vaccinations and think about where we should be targeting it.”

While the UK and South African variants are different, they share at least one mutation called N501Y that may make the virus more transmissible.

Hancock said the two people who tested positive for the South Africa variant were now in quarantine, adding that other travellers from the country and their contacts must take similar precautions.

The measures will be temporary while the new variant is investigated at PHE’s laboratory at Porton Down. Work is already under way at the lab to investigate the UK variant, called B117.

The UK variant came to light when PHE analysis revealed that a new multi-mutant form of the virus was spreading rapidly in Kent and other regions during the November lockdown, while older variants of coronavirus were in decline.

The South African variant emerged after the first wave of infections in Nelson Mandela Bay on the coast of the Eastern Cape Province. Within weeks, it become the dominant coronavirus in both Eastern and Western Capes.

Dr Richard Lessells, an infectious disease specialist who has studied the South African variant at the University of KwaZulu-Natal in Durban, said there was too little evidence so far to know whether it is more transmissible than the UK one. “We do have good evidence that it is more transmissible than the previously circulating variants, but it’s difficult for us to quantify precisely,” he said.

Stuart Neil, a professor of virology at King’s College London, said that while little was known about the new variants, it was important to take precautions.

“We are still waiting for definitive proof that there’s something in the mutations that have arisen in these variants that are actually giving them an intrinsic transmission advantage,” he said. “But I think we just have to err on the side of caution and act as if these new variants have enhanced transmission characteristics.

“Ultimately, we’re a small country. Everyone going into tier 4 is going to become an inevitability. The new UK variant is all around the country … and if it is more transmissible then, of course, it will take over.”

Dr Stephen Griffin, associate professor at Leeds University’s school of medicine, said: “Clearly variants with increased potential for transmission are a huge concern at present and going forward. However, the crisis in the UK has been growing since the summer and we are in this dreadful position now because of delays and inaction since cases began to increase.

“It is good that action is being taken now to curtail the spread of the new variant, but this must not be used as a distraction from the poor management of the epidemic since the first lockdown ended. The cost of the failure to suppress infections and establish effective testing and tracing over summer is now being counted both in human lives and by the economy.”

Dr Susan Hopkins, the chief medical adviser on Covid-19 to PHE and NHS test and trace, said: “We are investigating this new variant of SARS-CoV-2 which originated in South Africa. Viruses often evolve and this is not unusual. We are carrying out work as a priority to understand the potential risk this variant may cause. It is important to say that there is currently no evidence that this variant causes more severe illness, or that the regulated vaccine would not protect against it.

“The best way to stop infection is to stick to the rules – reduce your contacts, wash our hands, wear a face covering, keep our distance from others and ventilate indoor spaces.”