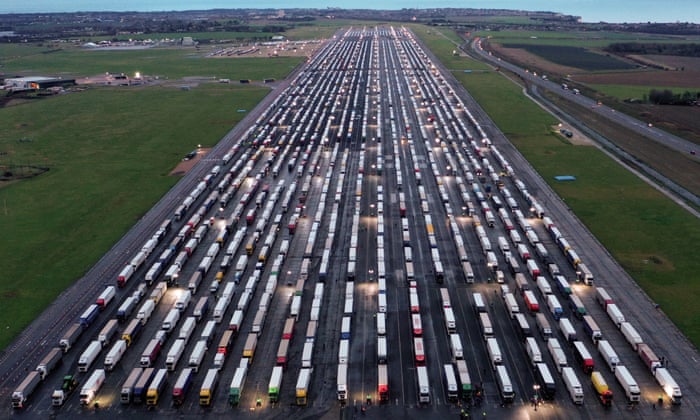 Supermarkets and their suppliers are planning an unprecedented airlift of fresh fruit and vegetables into the UK next week amid fears the lifting of a French blockade will not prevent some shortages in stores.

One major supermarket, which declined to be named, said it had already begun flying in produce from Spain and north Africa and another said it was considering doing so, while the Lufthansa landed 80 tonnes of fruit and vegetables at Doncaster airport on Wednesday.

Supermarkets and their suppliers are scrambling to find alternative ways to stock shelves as thousands of lorries and vans remain stuck outside Dover.

One cargo flight specialist, Air Charter Services, said it had received requests for 300 flights for fresh produce, which it would not normally carry.

The company said no food trips had been confirmed but business was already up 300% on last year as it was transporting other goods including textiles, post, automotive parts and pharmaceuticals.

On top of the problems at Dover, many companies are looking for ways to avoid disruption at container ports including Felixstowe, which have been congested for weeks as result of Covid-related disruption.

Justin Lancaster, the group commercial director, said: “The hugely increased amount of inquiries for perishable goods has been unprecedented. Our view is that customers are waiting to see what the extent of the disruption is going to be and are preparing options before pushing the button.”

Those options may be limited after more than 840 workers at British Airways’ cargo division, predominantly based at Heathrow, voted for strike action next week.

The Unite union said it planned nine days of strikes from Christmas Day, in a dispute over a decision to fire and rehire the workforce on new terms.

British Airways said no worker would take more than a 10% pay cut under its plans and half of cargo workers’ salaries would rise.

It said: “This planned industrial action by Unite helps no one and comes at a time when IAG Cargo is transporting critical supplies around the world and the aviation industry has been hit hard in 2020 by the global pandemic.”

With air freight a highly expensive option, industry insiders said few retailers and suppliers would take that route. Other options being explored include increasing direct shipments from Holland and Spain, although capacity on ferries from those countries is limited.

Retailers warned on Tuesday that vehicles would need to begin moving on Wednesday or there would be shortages of fresh produce including lettuces, tomatoes, citrus and soft fruit, and cauliflowers in stores from 27 December.

Andrew Opie, the director of food and sustainability at the British Retail Consortium, said on Wednesday there could still be problems in stores despite the lifting of the blockade because many lorries remained gridlocked.

“It is good news for consumers as the French borders have now reopened, however it is essential that lorries get moving across the border as quickly as possible. Until the backlog is cleared and supply chains return to normal, we anticipate issues with the availability of some fresh goods,” he said.

The Road Haulage Association (RHA) now estimates that up to 10,000 lorries and thousands more small vans are waiting to cross the Channel after the two-day French ban on freight arriving from the UK.

The trade body said it could take several days to clear the backlog because the Dover port area was in “gridlock”. “This is going to be a long process, taking not hours but days,” a spokesman said. “Nothing is moving.”

Clearing the queue will take time as all drivers must be tested for Covid before being allowed into France.

Food transport groups have warned that potential disruption could not only lead to problems with supply after Christmas but also serious problems in January as the end of the Brexit transition looms.

The Department for Transport (DfT) said it had already begun testing drivers on the M20 and at an emergency parking facility at Manston airport with help from the military. Ten mobile crews are handing lateral flow tests, which give results in 30 minutes to drivers in their cabs.

The RHA and the DfT urged any delivery drivers not already in Kent to stay away until the situation eased.

While some fresh food shelves could look bare in coming days, retailers urged shoppers not to panic buy. They said there would still be plenty of food as traditional Christmas fare such as potatoes, carrots, brussels sprouts and parsnips were largely grown in the UK and there were plenty of supplies of long-life goods such as tinned and packet foods.

From plans to panic: how the UK’s week of Covid chaos unfolded – video timeline

COVID-19 UK variant may have an advantage, but ‘underlying mechanism’ still unclear