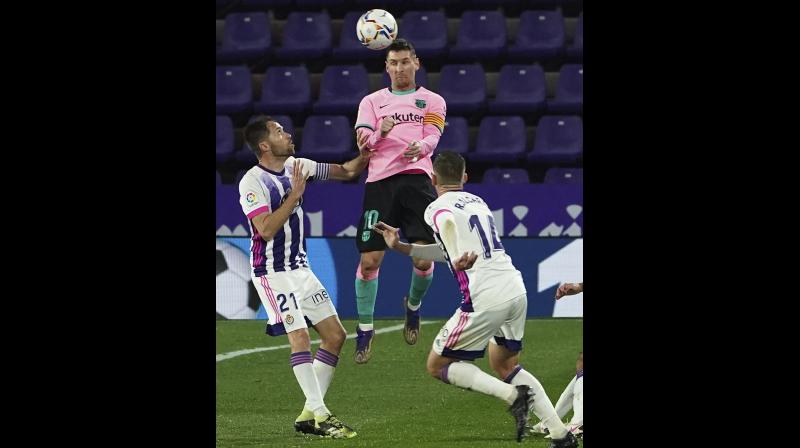 Madrid: Lionel Messi overtook Pele’s record of goals for a single club on Tuesday as Barcelona strolled to a 3-0 La Liga win at Real Valladolid, while Atletico Madrid kept hold of their place at the top of the table.

Messi struck his 644th goal for Barca, one more than Brazil legend Pele scored for Santos, in the 65th minute of a routine win for Ronald Koeman’s side, who are fifth in La Liga after the win and eight points behind leaders Atletico.

Barca started on the front foot at the Jose Zorrilla Stadium, with Messi flashing a curling shot wide in the seventh minute and forcing a superb save from Jordi Masip in the 20th minute.

Martin Braithwaite gave the away side a deserved second 14 minutes later, Messi slipping through Sergio Dest who rolled over a perfect low cross for the Danish international to tap home.

The easy win puts Barca two points behind Sociedad and fourth-placed Villarreal, who drew 1-1 at home with Athletic Bilbao.

Earlier second-half goals from Mario Hermoso and Marcos Llorente earned Atletico a 2-0 win away at a Sociedad team.

Elsewhere, Ten-man Juventus crashed to their first Italian league defeat of the season 3-0 at home against Fiorentina on Tuesday in a nightmare final game before Christmas.

The defeat came hours after the champions learned they must play the match against Napoli which was cancelled on October 4 after Napoli decided not to travel to Turin because of coronavirus cases.

On Tuesday, Napoli won their appeal to the Italian Olympic Committee (CONI) after being handed a 3-0 defeat and a one-point deduction. As a result Juventus, who had started the day with 27 points, finished it with 24.

Juventus are fourth, tied on points with Napoli and Roma, and seven points behind leaders AC Milan.

The champions got off to a terrible start with Fiorentina’s Franck Ribery setting up Dusan Vlahovic for the opener after just three minutes.

Fiorentina doubled the lead after 76 minutes with the ball bouncing off Juve’s Alex Sandro and into the goal. Martine Caceres turned in a Cristiano Biraghi cross from close range five minutes later.