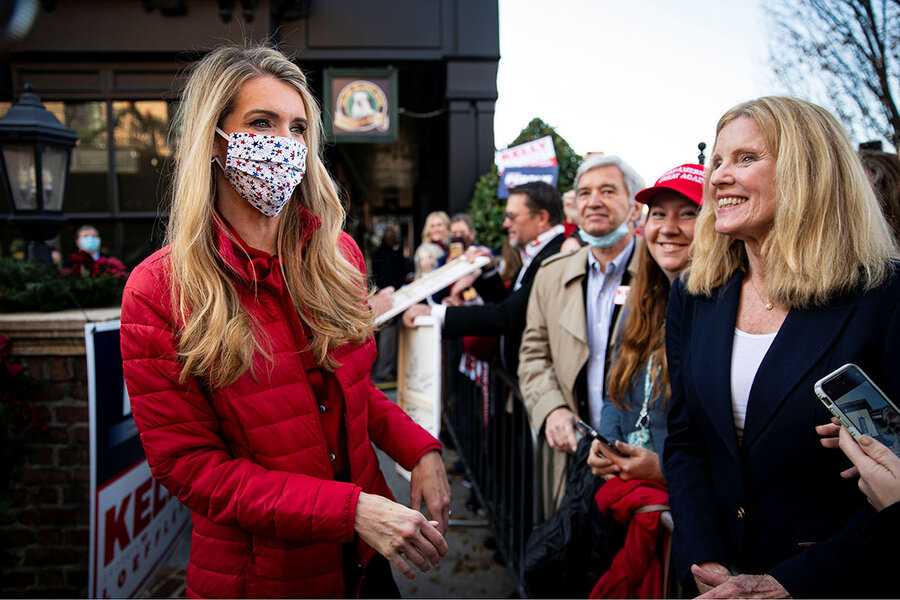 To Republican Sen. Kelly Loeffler, the gospel that her opponent preaches from the pulpit of Ebenezer Baptist Church in Atlanta is a threat to capitalism and the American way of life.

She has not minced words. The Rev. Raphael Warnock, whom she faces in a Jan. 5 runoff for United States Senate, is a “radical liberal,” she repeatedly says. At a rally for Senator Loeffler, former Rep. Doug Collins went further: “There is no such thing as a pro-choice pastor. What you have is a lie from the bed of hell. It is time to send it back to Ebenezer Baptist Church.”

Perhaps such heated rhetoric should not be surprising. The election – along with a second Georgia runoff on the same day – will determine which party controls the Senate in Washington. With Democrats now set to hold the White House and House of Representatives, the Georgia races represent a last stand for Republicans this election cycle.

Yet the targeting of Mr. Warnock’s beliefs has taken the election beyond politics. It has revealed the deep differences in the South between a white Christian tradition founded on personal salvation, and a Black Christian tradition that preaches liberation and social justice. In that way, the political balance of power in Washington could hinge on how Georgia resolves tensions about faith that date back to America’s founding.

In the past, when those two strands of Christianity have clashed, Ebenezer has been a salve, honored as the church of Dr. Martin Luther King Jr. But the religious nature of the attacks on Mr. Warnock suggests not just a base-energizing strategy, but a willingness to risk the bonds of those efforts to find common ground and healing.

“This McCarthy-esque frightening plays on polarization and tribalism, and has become a departure from a fragile trajectory of increased bipartisan civility” between Republicans and the Black church, says Robert Franklin, the former president of Morehouse College, who now holds a chair in moral leadership at Candler School of Theology at Emory University in Atlanta.

“At its heart it’s a mischaracterization,” he adds. “This is not Marxian economics. This is Christian social gospel.”

On Saturday, more than 100 Black pastors wrote to Senator Loeffler, asking her to “cease and desist your false characterizations of Reverend Warnock as ‘radical’ or ‘socialist.’… We see your attacks against Warnock as a broader attack against the Black Church and faith traditions for which we stand.”

Senator Loeffler pushed back on the accusation, tweeting, “No one attacked the Black church.”

Addressing Mr. Warnock, she wrote, “We simply exposed your record in your own words. Instead of playing the victim, start answering simple questions about what you’ve said and who you’ve associated yourself with. If you can’t – you shouldn’t be running for U.S. Senate.”

While few members of Congress are ordained ministers, the House currently has more than at any time since Congress began keeping occupational statistics in the 1950s, according to Robert Speel, a political scientist at the Pennsylvania State University. The first ministers from the Black church to serve in Congress date back to Reconstruction.

Mr. Warnock presided over the funeral of civil rights leader John Lewis as well as Rayshard Brooks, the Black man killed by an Atlanta police officer this summer. Ebenezer has long been seen as a place of fellowship, even by those who might disagree with its religious worldview. Senator Loeffler’s first event as a member of the U.S. Senate was to speak at Ebenezer on Martin Luther King Jr. Day – part of an annual pilgrimage by Republicans to pay homage to the King family and the broader Black church.

Role of faith in the election

In such a high-stakes election it is natural that religion would become a key motivator.

“Churches have power,” says Trelleny Joiner, a faith organizer at the New Georgia Project, a nonpartisan voter registration effort. “Especially being here in the Bible Belt and Georgia having very deep faith and religious roots, there’s not really any separation between church and state when you consider how faith communities have such a big role in the political agenda of a state or a community – or the whole nation.”

That has made abortion a top issue for many voters. Mr. Warnock’s pro-abortion-rights stance has caused problems within his own religious community, too, with conservative Black pastors criticizing him for his views.

But every issue, it seems, has an undercurrent of race and culture beneath it, says the Rev. Dwight Andrews, senior pastor at First Congregational Church of Atlanta.

“People aren’t asking thoughtful questions about who would be the best leader for the future, but who is white and who is Black, who is the demon and who is going to be the savior of whiteness?” he says.

The campaign has become a test of Georgia values, he adds.

Aaron Goldstein wrestled with his decision in both races – Senator Loeffler versus Mr. Warnock and Republican Senator David Perdue versus Democrat Jon Ossoff. He moved from New York to Atlanta two months ago for a new job. A Republican and naturalized citizen from Canada, Mr. Goldstein voted by absentee ballot last week for Mr. Warnock – with great hesitation.

“If Loeffler and Perdue lose, it will be because of their own naked self-interest, and that’s something that is going to resonate,” he says. “If Ossoff and Warnock are successful, it will be in large part because Perdue and Loeffler made it clear they didn’t care” about issues that face Georgians, from the pandemic to racial harmony, he adds.

Bill Sawyer has a different vantage point. The cowboy-booted Texas transplant is one of the few remaining residents of New Ebenezer, Georgia, perched above the mud-stained whorls of the Savannah River. The town was founded as a religious utopia by Protestant exiles from Austria in the late 18th century, and Mr. Sawyer lives in one of the cabins at a Christian retreat.

Here in Effingham County, a record 80% of eligible voters cast ballots in the November election, with Senator Loeffler besting Mr. Warnock by a 3-to-1 margin. Yet Mr. Sawyer senses a shift.

He is city manager of a town not far away, about 40 miles outside Savannah. It is growing by leaps and bounds, with 300 new homes being built in a town of 1,600 people. But the newcomers are noticeably more progressive than the county as a whole.

Senator Loeffler was originally seen as someone who could build common cause with those voters, Mr. Sawyer says. Her ownership of a Women’s National Basketball Association team and her outreach to Ebenezer early in her tenure pointed in that direction.

Instead, her decision to forgo that suburban appeal for full-throated base mobilization “seems like a rookie mistake” out of tune with Georgia sensibilities, says Mr. Sawyer.

“What people in this state want is service and acceptability,” he says. “That’s not the message that’s being conveyed. And that could backfire in the suburbs, where this race will be decided.”