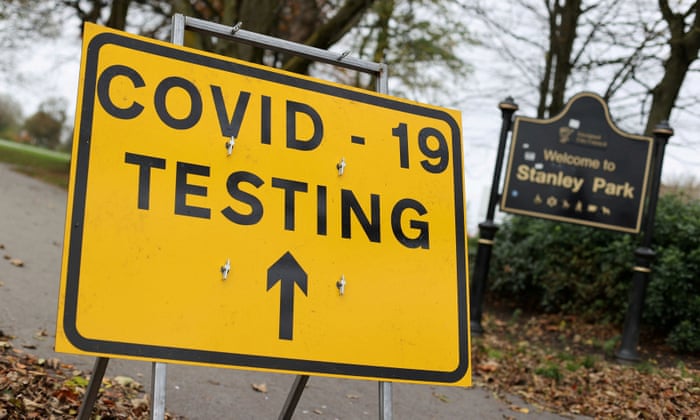 Thousands of people have waited hours for a rapid-turnaround coronavirus test in Liverpool before spending Christmas Day with loved ones.

Long queues formed outside testing centres across the city on Christmas Eve, a day after some sites had to turn people away due to “incredible demand”.

It came as the Office for National Statistics (ONS) said the spread of coronavirus was continuing to rise across England, with one in 85 people thought to have the disease last week – up from one in 115 two weeks earlier.

Liverpool city council said nearly 10,000 people took a test on Wednesday – up from about 3,500 a day usually – with waiting times of up to two hours at most sites on Thursday as queues formed from 6.30am in near-freezing temperatures. The city is one of the only places in the UK to operate walk-in test centres for people without symptoms to take a 30-minute test.

Matthew Ashton, the city’s director of public health, said there had been “huge demand” for the tests in the run-up to Christmas, but he warned that a negative result did not mean people could disregard social distancing or other hygiene advice.

He said: “We are reminding people that a negative test is not a green pass to ignore social distancing, hand hygiene, the wearing of face coverings and all the other measures that are in place to prevent the spread of the virus. We are also asking people not to have vulnerable relatives around on Christmas Day, to help keep them safe. Covid is a Christmas gift you don’t want to give or receive.”

The lateral flow devices, which were originally piloted in the city, are being rolled out to more than 100 other local authorities, with many planning to use them primarily in workplaces, schools and care homes.

All but two of the 16 asymptomatic testing centres open in Liverpool were “very busy” on Thursday morning, according to a council map. The Liverpool Echo reported that hundreds of people were waiting through the morning at one site in Southport, which said it had tested 250 people by about 10am, compared with fewer than 500 every day last week.

Figures released by the ONS on Thursday suggested 645,800 people in England had Covid-19 last week, with a sharp increase in London, the south-east and east of the country thought to be linked to the new hyper-infective variant discovered in the UK earlier this month.

About two-thirds of people testing positive in these areas could have the new variant, the ONS said, adding that this was only an estimate based on genes detected by the tests. The percentage of people with Covid-19 increased in Wales and Northern Ireland but fell in Scotland in the same period.