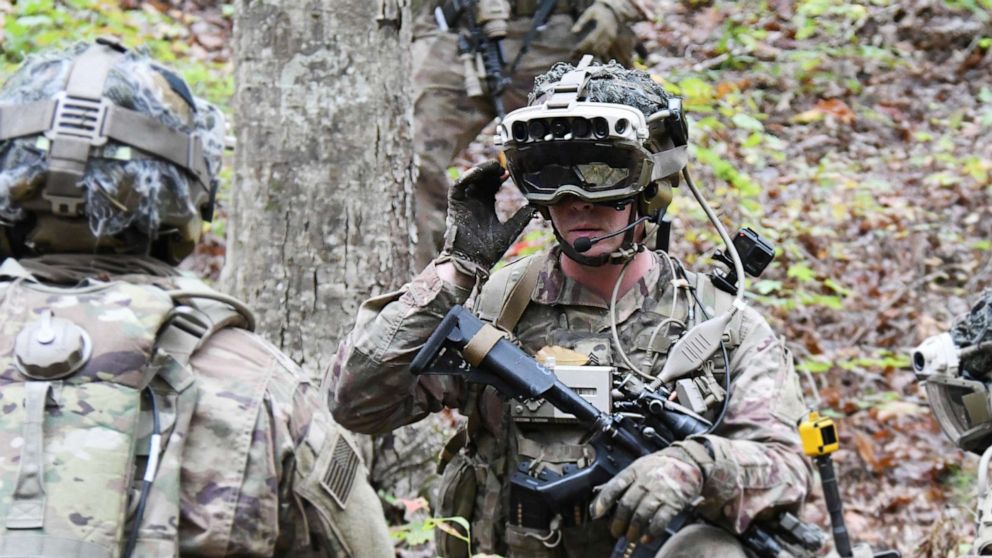 It sounds straight out of science fiction, but new futuristic combat goggles developed for the U.S. Army will transform how soldiers see the battlefield and cut through the fog of war.

The goggles are known as IVAS, the acronym for the Integrated Visual Augmentation System, that projects 3D terrain maps over what soldiers see directly in front of them and allows troops to see in the dark, through smoke and even around corners.

“It’s a fighting goggle that’s supposed to really upgrade situational awareness in the way that the men and women of the United States fight,” Alex Kipman, Microsoft’s technical fellow responsible for mixed reality, told ABC News in an interview.

IVAS utilizes the mixed reality technology that Kipman developed for Microsoft’s HoloLens, to give soldiers more information than they have ever had on the battlefield. The hologram technology of HoloLens has been taken many steps further to help soldiers plan and execute their missions.

“This is a transformational change for the Army,” Ryan McCarthy, the secretary of the Army, told ABC News.

“I think absolutely that the future is here,” said Gen. James McConnville, the Army’s chief of staff. “This is going to fundamentally change the way we do business in the United States military.”

Attached to their combat helmets, the clear goggles allow soldiers to know precisely where they are thanks to a heads-up display, known as HUD, that provides them with an overhead compass and overlays maps of their location.

“Everybody can share in the experience,” said Kipman. “You can place different points of interest in the world and then see arrows in front of you that really guide you from point A to point B.”

The Soldiers and Marines testing the goggles at Fort Pickett have been impressed by the amount of information the goggles provide and say that despite all of its complexity it is as easy to use as a smartphone.

“It combines a lot of things that we currently utilize, such as global positioning devices, or G.P.S., communication devices, as well, as land navigation tools, mission planning tools,” said Marine Cpl. Ryan Sweckard.

“Those are things that are commonly individual technologies that are now combined into this one system,” said Sweckard. “To combine everything, everybody seeing into one system, that’s impressive.”

Troops no longer need paper maps to plan their missions ahead of time, instead they use the holograms and 3D terrain maps projected onto their goggles to see what lies ahead.

“As a platoon leader, I can see where my entire platoon is projected onto like a holographic map, said Lt. Nicholas Christopher, from the Army’s 82nd Airborne Division. “And for me, that’s amazing because there’s a lot of guesswork that goes out the window.”

“There’s a lot of verbal communication over radios that I don’t have to do anymore,” he added.

During training the goggles lets troops see holograms of enemy fighters as they move to clear a room, and afterwards troops can gather to watch another hologram that gives them an overhead view oft heir mission.

The goggles also incorporate night vision and thermal imagery technologies that are a significant step up from what soldiers are currently using.

While current night vision goggles provide a limited field of view comparable to looking through a straw, IVAS provides a full 180-degree field of view.

By turning a knob, troops can easily switch to thermal technology that enables them to see through smoke, a capability that night vision goggles cannot provide.

Adding a scope to a rifle gives troops an edge in dangerous urban warfare by letting them peer around corners. What the scope sees ahead is projected onto the HUD no matter what direction a soldier is looking.

“I can literally just peek my weapon around the corner,” said Army Staff Sgt. Caleb Kester. “And whether I’m looking to the right, the left, straight up, straight down, I have that picture in my view.”

“The new integration of infrared, thermal, and a heads-up display will help increase the survivability of our troops, as well as their lethality to the enemy,” said Eric Oehlerich, a former Navy SEAL and an ABC News contributor.

Mick Mulroy, a retired Marine, CIA paramilitary officer and ABC News contributor agreed that IVAS will help troops, but urged caution on becoming too reliant on advanced technologies “as our enemies will surely try and come up with a way to defeat them.”

Because of that Oehlerich said soldiers should maintain their basic military skills because “it’s hard to counter a paper map and magnetic compass.”

McCarthy said young soldiers’ familiarity with technology and having Microsoft engineers close by has helped with the development of IVAS since it first started three years ago.

“It is technology that they are used to and they become very comfortable very quickly,” said McCarthy.

Testing is already under way on new ways to enhance IVAS, by placing cameras around armored vehicles so troops inside can have a full 360 degree view of what’s happening outside.

Army leaders believe the improvements IVAS brings to training and battlefield awareness can make the difference between life and death.

“You have the opportunity to rehearse it 50 times before you actually go on the real mission,” said McConnville. “I think it’s going to save soldiers’ lives.”