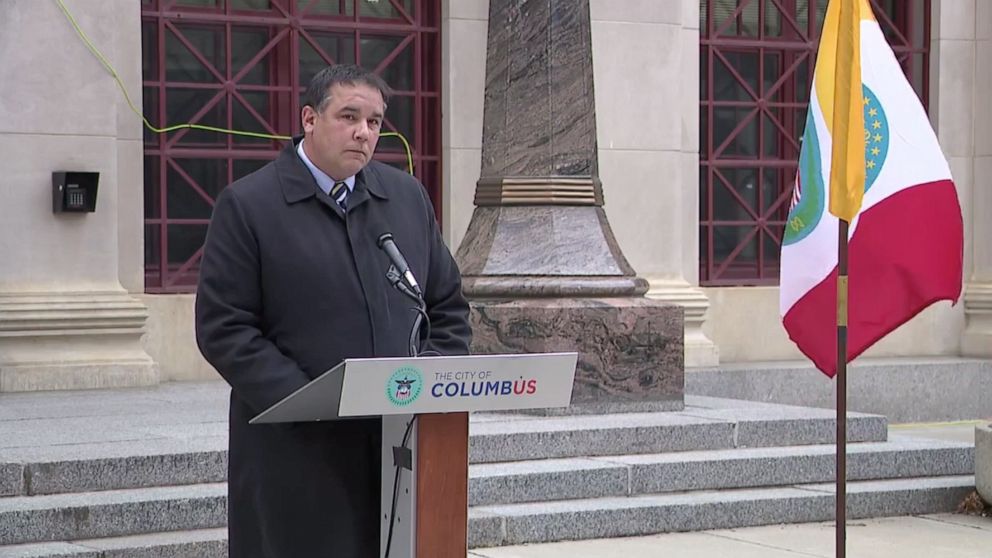 “Early this morning, we learned of the killing of another African American at the hands of law enforcement. Our community is exhausted,” Ginther said at a press conference Tuesday.

One “fact that disturbs me greatly,” Ginther said, is that the officers involved did not turn their body cameras on until after the shooting. The mayor said a feature of the camera records the 60 seconds prior to it being turned on, but the “look back function” does not have audio.

That means, Ginther said, authorities do have video of the shooting, but no audio of what the officer or victim said in the lead-up to the fatal encounter. This footage, officials said, also shows there was a delay in rendering first aid to the victim following the shooting.

The mayor expects the video to be released Wednesday.

“It is unacceptable to me and the community that the officers did not turn on their camera,” Ginther said during the press conference. “Let me be clear, if you’re not going to turn on your body-worn camera, you cannot serve and protect the people of Columbus.”

The identities of the officer and the victim have not been released.

Authorities are waiting for the next of kin to be notified before releasing the victim’s name. The city is also letting the family view the footage of the shooting before it’s released publicly.

The incident began at 1:37 a.m. Tuesday, when officers were dispatched to a “non-emergency” disturbance call from a neighbor who allegedly saw a man sitting in an SUV for an extended period of time while repeatedly turning the vehicle on and off, according to the Columbus Department of Public Safety.

After officers arrived, authorities said officers saw a garage door open and a man inside. Based on one of the responding officer’s “look back” body camera footage, the man walked toward the officer with a cellphone in his left hand. His right hand was not visible.

An unidentified officer then shot the man, police said, who was taken to Riverside Hospital, where the victim was pronounced dead at 2:25 a.m.

“The preliminary investigation indicates the man shot was visiting someone at the home. A weapon was not recovered at the scene,” the Department of Public Safety said in a statement.

Neither of the responding officers turned their body cameras on until after the victim was shot.

“The Division invested millions of dollars in these cameras for the express purpose of creating a video and audio record of these kinds of encounters,” Columbus Police Chief Thomas Quinlan said in a statement Tuesday. “They provide transparency and accountability and protect the public, as well as officers, when the facts are in question.”

“This is a tragedy on many levels,” Quinlan said. “Most importantly, a life has been lost. That must be our focus going forward. … Our community deserves the facts. If evidence determines that laws or policies were violated, officers will be held accountable.”

“The compounding heartbreak of learning an unarmed Black man was killed last night by a Columbus police officer is beyond description,” the Columbus City Council said in a statement Tuesday. “Thoughts and prayers cannot soothe this pain, and the members of Columbus City Council are beyond frustrated at this senseless death. Too many families in our community are mourning at a time when we should be seeking peace and hope.”

Meade, who had been taking part in a search for a fugitive along with the U.S. Marshals Service, said Goodson — who was not the target of the search — waved a gun at him when he drove by his police car. Meade confronted Goodson outside his home, and he refused to drop his gun, U.S. Marshal Peter Tobin said at a press conference earlier this month.

But Goodson’s family said he was returning from a dentist appointment and had a Subway sandwich in his hand, according to family co-counsel Sean L. Walton.

In Goodson’s death, there was also no body camera footage, because Franklin County Sheriff’s task force officers are not issued body cameras.

The fatal shooting sparked outrage and protests among the community, and is currently under investigation by the FBI and local authorities.

‘The truth of history is unbiased’: Ken Makin on race, justice, and hope (audio)

Breonna Taylor’s mother on spending 1st Christmas without her