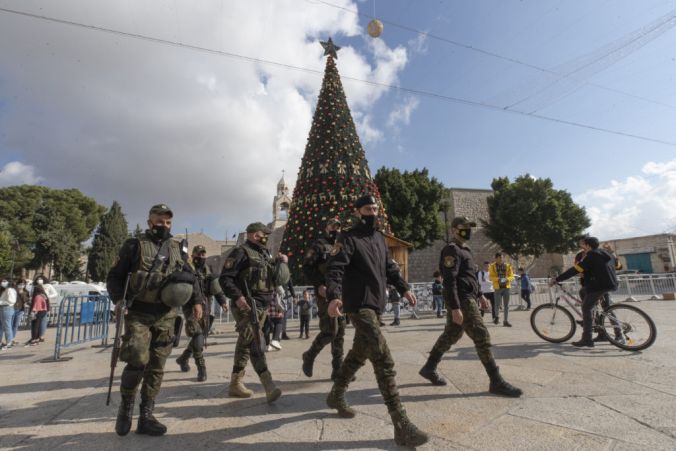 A Palestinian National security unit is deployed at Manger Square, adjacent to the Church of the Nativity, traditionally believed by Christians to be the birthplace of Jesus Christ, ahead of Christmas, in the West Bank city of Bethlehem (Nasser Nasser/AP), © AP/Press Association Images

Bethlehem ushered in Christmas Eve with a stream of marching bands and the triumphant arrival of the top Catholic clergyman in the Holy Land.

However, few people were there to greet them as the coronavirus pandemic and a strict lockdown dampened celebrations in the traditional birthplace of Jesus.

Officials tried to make the most out of a bad situation.

“Christmas is a holiday that renews hope in the souls,” said mayor Anton Salman.

“Despite all the obstacles and challenges due to corona and due to the lack of tourism, the city of Bethlehem is still looking forward to the future with optimism and will celebrate Christmas in all its human and religious meanings.”

Raw, rainy weather added to the gloomy atmosphere, as dozens of people gathered in the central Manger Square to greet the Latin Patriarch, the top Catholic clergyman in the Holy Land.

Youth marching bands playing Christmas carols on bagpipes, accompanied by pounding drummers, led a procession ahead of the patriarch’s arrival early in the afternoon.

Thousands of foreign pilgrims usually flock to Bethlehem for the celebrations.

But the closure of Israel’s international airport to foreign visitors kept tourists away this year.

The Palestinian Authority last week banned intercity travel in the areas it administers in the Israeli-occupied West Bank, keeping even Palestinian visitors away.

The restrictions limited attendance to dozens of residents and a small entourage of religious officials.

Evening celebrations, when pilgrims normally congregate around the Christmas tree, were cancelled, and Midnight Mass celebrations were limited to clergy.

The 85-year-old Palestinian president, Mahmoud Abbas, who usually attends the solemn occasion, said he would not participate.

The coronavirus has dealt a heavy blow to Bethlehem’s tourism sector, the lifeblood of the local economy.

Restaurants, hotels and gift shops have been closed.

“The atmosphere of the Christmas celebrations is so beautiful in Bethlehem,” said Balqees Qumsieh, a Bethlehem resident.

“This year everything will be different.”