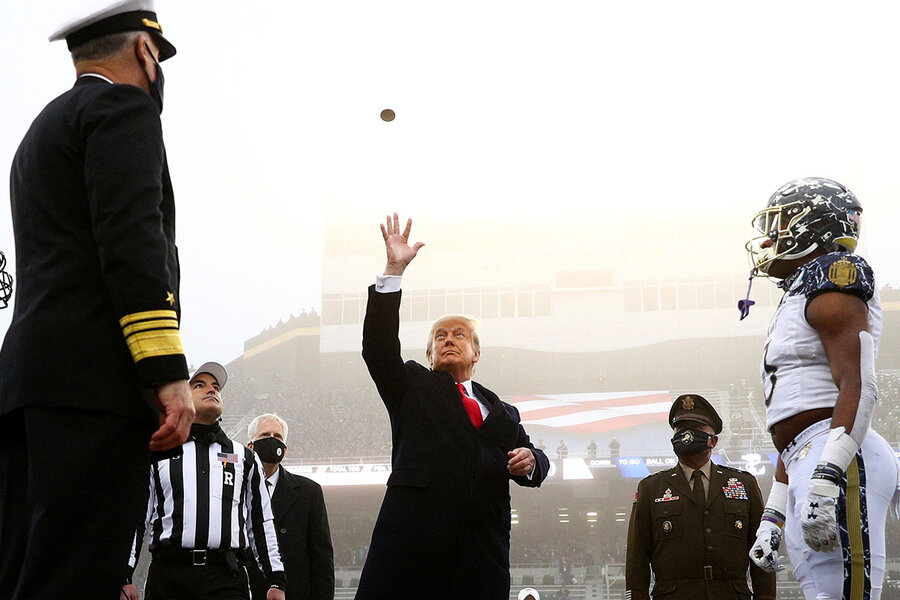 Twenty-eight days before Inauguration Day, a presidency like no other has morphed into a transition like no other – at once eye-poppingly dramatic and utterly predictable.

President Donald Trump still insists he won the Nov. 3 election, and has been meeting with conspiracy theorists, controversial former aides, and congressional allies promoting unrealistic and in some cases seditious ideas aimed at overturning the results. In other ways he is also behaving like a more typical American president about to leave office, with the announcement on Tuesday evening of 20 pardons and commutations – albeit some of them highly controversial.

Within minutes of issuing the clemency memo, President Trump also upended a hard-fought, bipartisan congressional agreement on pandemic relief payments, demanding in a tweeted video that they be raised from $600 a person to $2,000. The “or else” – a presidential veto – was implied. Wednesday morning, congressional leaders scrambled to save the deal, which includes government funding that would prevent a shutdown later this month.

For Mr. Trump, the last-minute maneuver reflected not only a populist view of government spending that runs counter to the stance of GOP congressional leaders but also a love of the spotlight. He used the opportunity to insist – yet again – that he might be headed for a second term, asking Congress to “send me a suitable bill, or else the next administration will have to deliver a COVID relief package, and maybe that administration will be me.”

Today, he followed up by vetoing the National Defense Authorization Act – funding the military – which had passed the House and Senate with veto-proof majorities.

Beneath the daily turmoil lurks the perpetual question: What does Mr. Trump actually believe? Does he really think the election was stolen from him, despite the lack of any concrete evidence? Or does he know he lost, and is simply keeping his supporters fired up so he can hold sway over the GOP and possibly run for president again in 2024?

“He’s livid,” says a source close to Mr. Trump’s orbit. “In his head, everyone was out to get him. And it’s the media coverage that’s eating at him more than anything.”

The president, according to this source, has seen a post-election survey by his pollster, McLaughlin & Associates, that reportedly shows he would have won reelection if more voters had been aware of the foreign business dealings of President-elect Joe Biden’s son Hunter.

Mr. Trump has blamed his attorney general, William Barr, for keeping quiet about a federal probe into Hunter Biden’s financial dealings during the campaign. At his final news conference Monday, Attorney General Barr refused to support the appointment of a special counsel to investigate the younger Mr. Biden. He also declined to back the federal seizure of voting machines, an effort some Trump allies have been pushing for arguing it would show evidence of manipulation. Mr. Barr, once a strong defender of Mr. Trump, announced his resignation last week.

As the endgame has neared, Mr. Trump has spent time with fringe figures, including former campaign lawyer Sidney Powell, who has outlined extensive conspiracy theories, and former National Security Adviser Michael Flynn, who has suggested seizing voting machines and deploying troops to key states to force a rerun of the election.

On Monday, Mr. Trump met with sympathetic members of Congress, including GOP Rep.-elect Marjorie Taylor Greene of Georgia, who has expressed support for the QAnon conspiracy theory. Ms. Greene says there’s growing support in the House and Senate to challenge Mr. Biden’s 306-232 victory in the Electoral College when both chambers meet on Jan. 6.

All of this year’s post-election machinations are a far cry from the usual. But then, Mr. Trump is “unprecedented in American history in so many ways,” says Robert C. Smith, a professor of political science at San Francisco State University.

But while the turmoil of 2020 may be unprecedented in the modern era, historians say it isn’t the most tumultuous election this nation has seen.

“We started out on the wee hours of election night with comparisons to 1960 and 2000, but, unfortunately, they proved too tame,” writes presidential historian David Pietrusza in an email. “So we have traveled on to 1876 and the ultra-contentious Hayes-Tilden matchup.”

Then, Democrat Samuel Tilden led in the popular vote over Republican Rutherford Hayes, but the electoral votes from several states were disputed. Lacking a constitutional remedy for the impasse, Congress convened a commission. In the so-called compromise of 1877, Mr. Hayes became president and Democrats effectively won the end of Reconstruction.

“Our Constitution does not actually say what should happen if there are disputes about who carried a particular state,” says Eric Foner, emeritus professor of history at Columbia University. “It lays out what happens if nobody wins the majority of the Electoral College: It goes to the House. But that assumes that everyone agrees on the Electoral College results. If people don’t, then you’re sort of in uncharted waters.”

Today, the Electoral College has already voted for Mr. Biden, and Mr. Trump’s effort to overturn the results in several states seems quixotic at best. When the joint session of Congress convenes on Jan. 6 to formally count the votes of the Electoral College, at least one member each from the House and Senate is expected to raise objections to Mr. Biden’s victory. But there’s no chance the effort to overturn the results goes anywhere.

So why would Mr. Trump encourage such an effort? He wants to “exhaust every avenue” and if he’s going down, go down fighting, says one Trump watcher. That never-say-die approach is part of his brand and boosts him as a post-presidential “influencer” and party leader, if not a candidate for 2024.

“What’s Trump after? God knows,” says Professor Foner, who notes “he has certainly picked up a lot of money” in political contributions during this post-election period. In addition, “he’s forced most Republicans to line up behind him, which reinforced his status as leader of the party.”

Another election that may hold some currency for Mr. Trump is the contest of 1824. Andrew Jackson won a plurality of both the popular and electoral votes, but when the election was thrown into the House, John Quincy Adams emerged victorious.

“Like Trump today, Jackson felt the election was illegitimate and corrupt, but he did not quite have the media outlets that Trump does to explain all this,” says Professor Foner.

Four years later, in a rematch, Jackson beat President Adams. A portrait of Jackson hangs on the wall of Mr. Trump’s Oval Office.

With a month still to go, the Trump-Biden transition has observers – including White House aides – on the edge of their seats. What else might Mr. Trump do, either domestically or in foreign policy, that could tie Mr. Biden’s hands? Will he pardon himself or family members? What will he do on Inauguration Day?

The pardons and commutations announced Tuesday evening caused an uproar, particularly those of three disgraced former members of Congress and four military contractors convicted of war crimes in Iraq. But Mr. Trump is still president, and by all accounts, enjoys flexing the executive power that comes with the office.

Whether a future Congress will try to rein in those powers is a discussion for another day. But for the next 28 days, it’s his to use.

The greatness of A Charlie Brown Christmas

US-based companies continue to share their products for the holidays, give back to the community