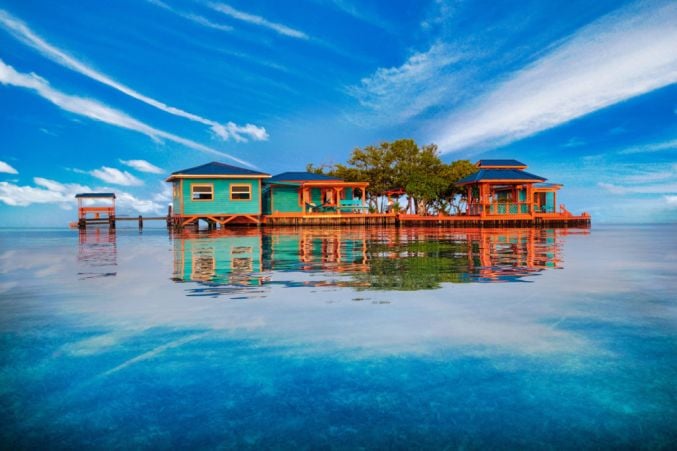 Even aside from pandemic imposed travel restrictions, private islands are not, traditionally, an accessible form of holiday. Kim Kardashian West recently earned the ire of the internet with a somewhat tone-deaf Instagram post, documenting a 40th birthday party with her “inner circle” on a private island in the midst of a global pandemic.

“We danced, rode bikes, swam near whales, kayaked, watched a movie on the beach and so much more,” she wrote. “I realise that for most people, this is something that is so far out of reach right now, so in moments like these, I am humbly reminded of how privileged my life is.” The result, inevitably, was a miniature avalanche of memes.

After 2 weeks of multiple health screens and asking everyone to quarantine, I surprised my closest inner circle with a trip to a private island where we could pretend things were normal just for a brief moment in time. pic.twitter.com/iIM232lhnI

There’s a whole host of private islands out there, ranging from sort-of-maybe-affordable-ish to absurdly-eye-poppingly-Jeff-Bezos-only-pricey. Here’s a few of the finest to at least fantasise about visiting…

A 50 acre islet in the Venetian lagoon, criss-crossed with trickling waterways and avenues of trees, Valle Falconera is dreamy, secluded, and might not break the bank. It’s hosted by the Sarzetto family, who’ve owned the island for generations, and flamingos are often spotted wading in the surrounding waters. The pastel pink farmhouse sleeps 16, and at full occupancy the nightly per person fee totals a comparatively paltry $42.

That’s about as cheap as private islands get.

A postcard paradise of the sort often used as screensavers, Brother Island advertises itself as ‘the whitest beach in El Nido’, and hosts everything from honeymoons to yoga retreats. Though you’ll be the only tourists present, your host will organise daily housekeeping, three meals a day and snorkelling, while drinks, massages and day trips are available for a little extra.

It’s small enough that the price tag isn’t completely extortionate ($100 per night, per person), and the island comes equipped with bamboo groves by land, and countless corals by sea.

A picturesque atoll off the Caribbean coast of Belize, Bird Island has featured in Airbnb ad campaigns, and a scroll through the gallery makes it abundantly clear why. Four separate buildings each with sleeping quarters are surrounded by sand flats and reefs, tailormade for swimming, sunbathing and snorkelling.

The ultimate out-of-the-way getaway, no other human will step foot on the island during your stay, which naturally necessitates self-catering. Nightly rates vary, but start at a little over $130 a person.

We’re nearing the business end of the private island roster, and the seven-night minimum stay will set you back between $7,000 and $17,000 per person, depending on promotions and occupancy.

A large, unspoilt island off the Caribbean coast of Nicaragua, Calala Island comes complete with swaying palms, thatched beach huts, and an infinity pool of the sort found at five-star hotels. Though there are no other tourists around, guests are far from alone, as staff are on hand to provide a steady flow of wine, snacks and local cuisine.

It’s probably not Kardashian-level expensive, but it’s on the way. Listed by Private Islands Online, rates are offered on a “luxury, all-inclusive basis”, and the rental tag is accompanied by five dollar signs.

Rihanna’s bringing out a fragrance: What should you think about when buying a new perfume?

Past climate change ‘tipping points’ can help us prepare for future: Study

How rewilding can boost your garden – and your life