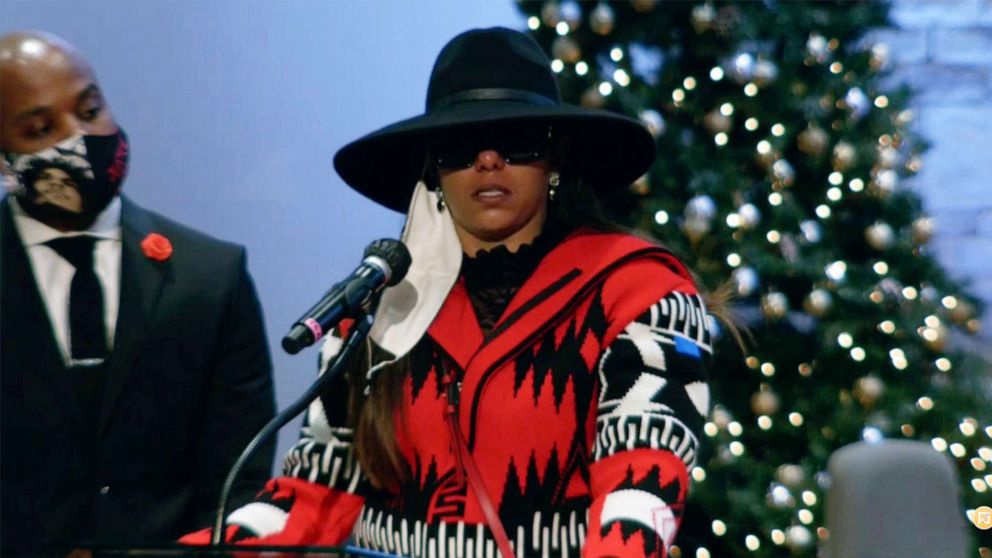 The mother of a 23-year-old Black man who allegedly was shot in the back by a white deputy sheriff at the doorstep of his home in Columbus, Ohio, gave an emotional eulogy at his funeral on Wednesday, telling mourners, “We have to get justice.”

Casey Goodson Jr.’s mother, Tamala Payne, addressed family and friends during the service at the First Church of God in Columbus, as local police, the FBI and the Justice Department continued to investigate the shooting this month, which has sparked large protests in Ohio’s capital city.

“I love you son with all my heart. This is by far the hardest day of my life,” Payne said through tears. “But I will stand strong in your name, and in your honor, and we will receive justice.”

Goodson’s funeral came a day after a police officer reportedly responding to a non-emergency disturbance at a home shot and killed another Black man who Columbus officials said was unarmed. Police said 47-year-old Andre Hill only had a cellphone in his hand when he emerged from the garage of a residence and was shot.

The officer who shot Hill, identified by officials on Wednesday as Adam Coy, 44, was relieved of his duties and placed on paid administrative leave after Columbus Mayor Andrew J. Ginther ordered the city’s police chief to take the officer’s badge and gun after a preliminary investigation determined the officer failed to turn on his body camera during the shooting. Police officials said the body camera’s “rollback” technology automatically recorded about 60 seconds of the incident, which will be released to the public after it is shown to the family of the man who was killed.

At a news conference following the funeral, Ginther spoke of the shootings of Goodson and Hill, saying, “Our community is grieving.”

“Enough is enough,” Ginther said. “This community is exhausted. The African American community is fearful, concerned, outraged and exhausted. If there were other members who were under attack … this community would come together and make sure our neighbors are safe. That is what we should do as a community, as a city.”

In a letter last week to outgoing U.S. Attorney General William Barr, Beatty called Goodson’s death an “unwarranted execution” and implored the Department of Justice to conduct “a fair, complete review of the shooting.” Beatty did not speak at Goodson’s funeral.

Goodson, according to relatives, had picked up sandwiches for his family after going to a dentist appointment. Relatives said he had placed the key in the door of his home while holding the bag of sandwiches when he was shot multiple times in the back by a Franklin County sheriff’s deputy identified by officials as Jason Meade.

Meade, who had been taking part in a search for a fugitive along with the U.S. Marshals Service, alleged that Goodson — who was not the target of the search — waved a gun at him when he drove by in his police car. Meade, who was not equipped with a body-camera, confronted Goodson outside his home. He allegedly refused to drop his gun, U.S. Marshal Peter Tobin said at a press conference earlier this month.

Goodson’s family, who has hired local attorney Sean Walton, said that while Goodson had a license to carry a weapon, they disputed Tobin’s description of the shooting.

Payne told those attending the funeral that she is determined to make sure her son did not die in vain, saying Goodson “wanted his name to mean something, and this is what it is.”