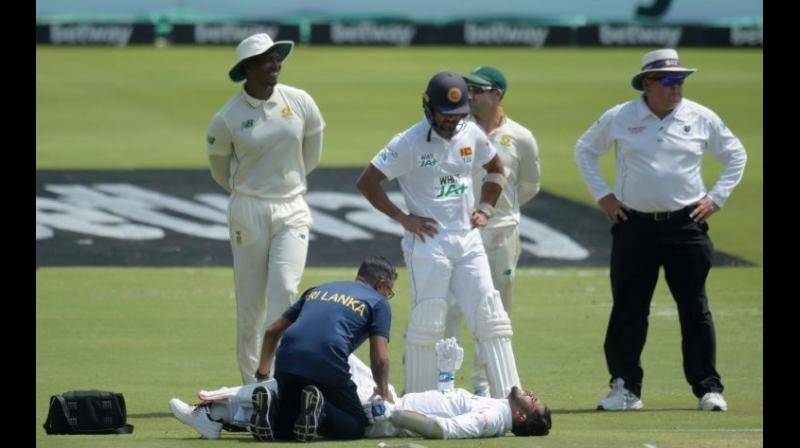 Sri Lankan all-rounder Dhananjaya de Silva's participation in the ongoing Test against South Africa will be known only after his Ultrasound Scan reports are available.

This was revealed by the team manager and the selector on tour Ashantha De Mel.

The 30-year-old  de Silva had to be taken off the field when he found himself in discomfort.

"It looks like he has a thigh strain. At present he is being treated at the ground but after the match to-day will be taken for Ultrasound Scans and the reports only will decide his fate in the Test", de Mel, speaking exclusively over the telephone from the ground during the tea break said.

Dhananjya had scored 79 runs off 105 balls with the help of 11 fours and 1 twoering six.

Dhananjaya was in full control of the game but suddenly found discomfort with his leg and physio was out to assess the damage.

The docs came out in full PPE with a motorised stretcher and was taken off the ground. He was hobbling onto the back of the buggy, and this could be a very sad end if he can not resume the inning where he left.

Ian Holloway resigns as Grimsby manager ahead of prospective takeover