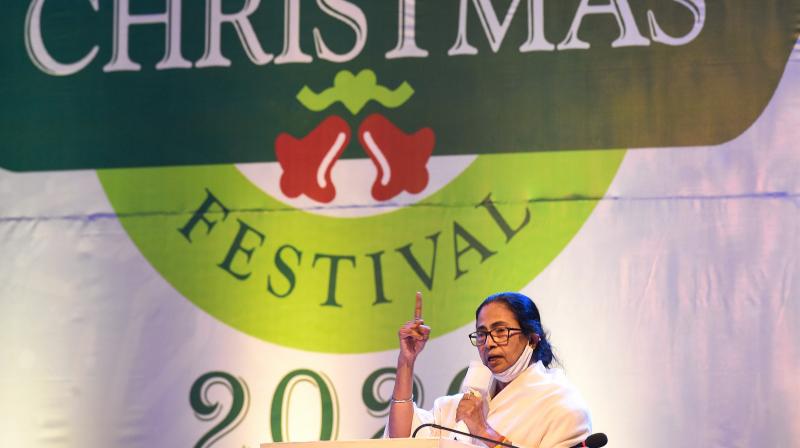 Asking Mr Shah to “cross check” his statements, the Trinamul Congress supremo also cautioned him against lying as a home minister for his political mileage and urged him to tell the “truth” about the state.

Inaugurating the Kolkata Christmas Festival at Allen Park in Park Street, Ms Banerjee, in an oblique reference to Mr Shah, said: “Bengal is No. 1 in so many sectors. Some people, I am sorry to say, are coming here from Delhi. If I do anything wrong, I will apologise to them. But please tell me why you are telling a garbage of lies to the people. Tell the truth.”

Meanwhile, election strategist Prashant Kishor, who has been in the eye of the storm of the rebel brigade within the ruling TMC over his role in party affairs, leading many to defect to the BJP, on Monday made a startling prediction that the saffron party would “struggle to cross double digits” in the next year’s Assembly elections. He also promised he would quit Twitter if proved wrong.

In a blistering attack on the BJP over communal politics, the CM said: “We love our Constitution. It is our pillar. But can you tell me if it thoroughly nurtured, and accepted the in real sense, secularism in India? No. It is typical politics of hatred that is going on. I condemn it.”

Earlier, at Nabanna, the state secretariat, Ms Banerjee boasted of West Bengal’s achievements in all sectors with facts and figures, and attacked Mr Shah and his party.

She alleged: “The BJP is a party of cheats. For politics, they can do and say anything. Hope Mr Shah knows what is gold or not. Speaking for a political party and furnishing false information does not suit a home minister. Amitji, yeh aapko shobha nehi deti hai. It is not right for you to talk of false and wrong information which were prepared by your party workers. You do not have an idea of it. Please cross check what you say. I have the evidence against whatever you claimed.”

Reaffirming her fierce opposition to the Citizenship Amendment Act, the National Register of Citizens and the National Population Register, she added: “When the CAA was passed, I started opposing it. They (BJP) cannot decide the fate of citizens. Let them decide their own fate. We are against the CAA, NRC and NPR. Nothing has been withdrawn. They exist. We will fight a battle against them. We will not allow anyone to go out of the country.”

The TMC chief announced that she would lead a rally on the route of Mr Shah’s roadshow in Bolpur on Sunday, in Birbhum on December 29.