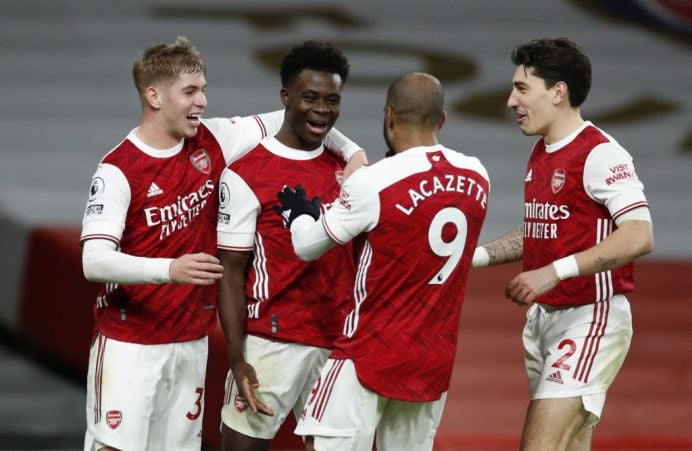 The Gunners went into the game as outsiders having taken just two points from their last seven, but manager Mikel Arteta shuffled his pack and found a winning combination as they secured a 3-1 success.

Alexandre Lacazette’s penalty gave the hosts the lead and ended his eight-game streak without a league goal, with Granit Xhaka – back from a three-match ban – bending home a sublime free-kick to double the advantage before the break.

Bukayo Saka secured the win as he added a third with a mistimed cross but Arsenal were made to sweat in the closing stages, Tammy Abraham pulling one back before Jorginho saw a stoppage-time penalty saved by Bernd Leno.

Arsenal were without Gabriel Magalhaes, the Brazilian defender now missing the next three games after coming into close contact with someone who tested positive for Covid-19.

His absence was not felt, however, as Arteta handed a start to Emile Smith Rowe, his first in the league in a year.

Chelsea boss Frank Lampard was able to call on both Reece James and Ben Chilwell as the England full-backs passed fitness tests to feature.

Arsenal have been sluggish at the start of games of late but were the quicker out of the blocks here, Martinelli – who shook off a knock to his ankle to start – skewing an early difficult chance wide.

Xhaka starred as he returned to the Arsenal midfield following his red card against Burnley but offered Chelsea their first clear chance on goal.

He fouled Christian Pulisic on the edge of his own box, with Mason Mount’s resulting free-kick clipping the outside of the post on its way wide.

With Chelsea pushing further forward, Arsenal managed to break in behind as Thiago Silva fouled Saka and Hector Bellerin burst through onto the loose ball, crossing for Smith Rowe who could not make telling contact on the penalty spot.

But they would take the lead from the penalty spot after James had tripped Kieran Tierney.

A VAR check backed referee Michael Oliver’s decision to point to the spot and Lacazette was on hand to dispatch the penalty 10 minutes before the break.

There was still time for Arteta’s men to double their lead before the interval, Xhaka scoring a fine free-kick for his first goal since July after N’Golo Kante had tripped Saka.

Lampard responded at half-time by introducing both Jorginho and Callum Hudson-Odoi from the bench as Mateo Kovacic and the ineffectual Timo Werner made way.

Arsenal dropped very deep at the start of the second half but caught Chelsea on the break and scored a third, with a cross-shot from Saka leaving Edouard Mendy stranded.

The confidence that has been missing from Arsenal for so long started to exude as Martinelli teed himself up for an overhead kick which worked Mendy.

Arsenal return to winning ways with an impressive win over their London rivals#ARSCHE pic.twitter.com/eBBTkIlBsn

The Brazilian then drew another save from the Chelsea goalkeeper as Arsenal sensed blood and pushed for a fourth.

Lacazette should have provided it as the ball was gifted to the forward by Mendy, but he attempted to curl a shot over his fellow Frenchman who did well to keep it out.

Mohamed Elneny thrashed a strike against the crossbar from the resulting corner before Chelsea pulled a goal back through Abraham.

A cross from Hudson-Odoi was turned home by the England striker with the offside flag originally ruling it out, only for VAR to overturn the call.

Silva missed a fine headed chance to make the closing stages more interesting, with Jorginho’s tame late penalty kept out by Leno after Pablo Mari had fouled Mount as Chelsea suffered a third straight away defeat.