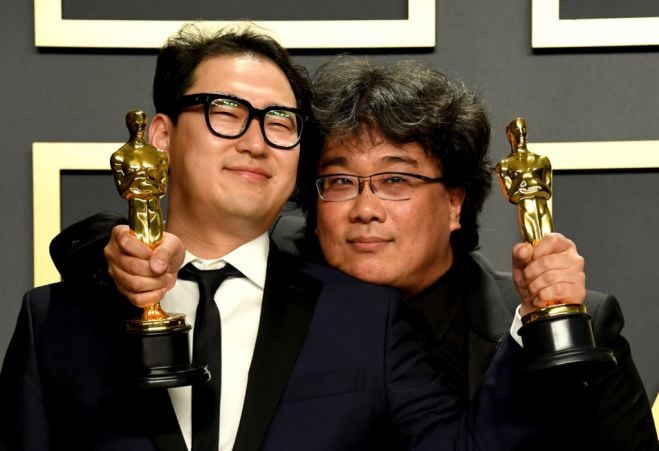 After an extraordinary year which temporarily closed cinemas across Ireland and the UK, film critic Damon Smith chooses his top 10 films of 2020.

Writer-director Bong Joon-ho mines a mother lode of deliciously cruel intentions in his wickedly entertaining, genre-bending satire, which made history in February when it became the first foreign language film to win Best Picture at the Academy Awards.

The script, co-written by Han Jin-won, lulls us into a false sense of security with a gently paced yet engrossing opening hour before Joon-ho tightens the screws on his desperate characters, setting in motion a jaw-dropping second act that leaves our nerves in tatters.

The filmmaker dissipates tension with staccato bursts of ghoulish humour, but each belly laugh is soaked with bile – primal screams of despair at a world that repeatedly kicks the poor and disenfranchised when they are down.

There are several exquisitely beautiful moments in Soul, the latest high-concept adventure from the computer animation wizards at Pixar, when torrents of hot saltwater tears coursed down my face and plopped with a satisfyingly dull thud into my lap.

Tears of joy, tears of lamentation, tears of wistful nostalgia, tears of regret: all masterfully coaxed by Pete Docter and co-director Kemp Powers within the framework of a rip-roaring body swap comedy involving a full-bellied therapy cat named Mr Mittens.

Soul is a wildly imaginative and deeply moving meditation on humanity, which riffs confidently to its own beat, employing bold visual flourishes that can be appreciated on multiple levels.

Celebrated French filmmaker Celine Sciamma sets our hearts ablaze with a sumptuous period drama set in mid-18th century Brittany. Sparks of attraction and desire unexpectedly crackle between a painter (Noemie Merlant) and her subject (Adele Haenel), threatening to burn their carefully ordered worlds to the ground. The writer-director reunites with Haenel, leading lady of her acclaimed debut feature Water Lilies.

Cinematographer Claire Mathon contrasts violent, crashing waves of the film’s remote island setting with the emotions churning beneath the actors’ expressive faces, rendering us breathless as characters grapple with the words to adequately express the longing in their scorched hearts.

Practice makes nail-bitingly tense perfection in Sam Mendes’s real-time thriller, inspired by stories of The Great War told by the director’s grandfather, who served as a lance corporal.

Shot in real-time in several exquisitely staged single takes, which are seamlessly stitched together by editor Lee Smith into a continuous fluid shot, 1917 is the product of six months of intense rehearsals and preparation, which included a physically gruelling training camp for hundreds of actors including leads Dean-Charles Chapman and George MacKay.

Mendes works closely with Oscar-winning cinematographer Roger Deakins to meticulously map out the intricate camerawork of each sequence, which places us in the trenches or pirouettes around impossibly tight spaces as bullets scythe through the air and blood seeps into shifting seas of thick mud.

It’s a tour-de-force of technical daring, which repeatedly dazzles and dumbfounds, juxtaposing heart-breaking brutality and self-sacrifice with moments of dreamy introspection.

The brightly lit arcades of a nameless British seaside resort bear witness to a brutal tug of war between faith and fanaticism in writer-director Rose Glass’ striking debut feature.

Infused with the creeping dread of a modern-day horror story, Saint Maud is a mesmerising portrait of religious fervour and sexual awakening anchored by a bravura central performance from Welsh actress Morfydd Clark.

Her porcelain features seem to hang in the pervasive darkness of the screen like some ghostly apparition, fixing us with a cold stare that perfectly and chillingly conveys the resolve of a nurse, who will follow silent instruction to the bitter and bloody end.

Cinematographer Ben Fordesman is a willing accomplice, conjuring scenes of gloomily lit domestic drudgery that suddenly thrum with menace and prickle our skin with fear.

The lean script tightens a knot of nail-biting tension by documenting the heroine’s spiritual breakdown from multiple perspectives. Abandon hope all ye who peer through Glass’ distorted lens.

Early in the first act of Lin-Manuel Miranda’s Tony and Olivier Award-winning musical, Schuyler sisters Peggy and Eliza – who will go on to marry American Founding Father Alexander Hamilton – trill, “Look around, look around at how/Lucky we are to be alive right now.”

Over the course of this year, the siblings’ exultation resonated with gratitude-soaked new meaning far beyond the aisles of the Richard Rodgers Theatre in New York where director Thomas Kail captured the original Broadway cast before their final bows in 2016.

The ensemble cast strains every sinew, tears visibly glistening on lower eyelids as political machinations and bold ambition cleave apart marriages and spatter the pages of history with fresh blood. How lucky we are.

Young lives matter in Rocks, a vibrant coming of age story which affirms the dauntless spirit of girlhood through the eyes of a 15-year-old heroine and her resilient friends.

Created in collaboration between writers Theresa Ikoko and Claire Wilson, a young cast of mostly first-time actors and a predominantly female creative team, director Sarah Gavron’s film unearths glimmers of hope and joy in those moments which threaten to crush the human spirit.

Playful scenes of girls chattering in the playground or shooting handheld footage for social media channels are stripped of artifice, as if we are watching a documentary about teenage life at close quarters.

Editor Maya Maffioli weaves together raw footage into a fluid, dynamic narrative. Nothing feels contrived or forced – when the film winds up for an emotional punch, it connects honestly and we feel the impact down to the marrow of our bones.

Life begins at 34 in director Alex Thompson’s award-winning comedy drama about a rudderless singleton, who confronts deep-rooted fears and insecurities after she fumbles her way into a position of responsibility caring for a six-year-old girl.

The script, co-written by Thompson and lead actress Kelly O’Sullivan, revels in the minutiae of everyday life and, refreshingly, does not blow out of proportion the central character’s stumbles on her way to hard fought self-enlightenment.

The menstrual blood-soaked aftermath of a one-night stand, which might be played for gross-out giggles or discomfort in clumsier hands, is a catalyst for genuine tenderness.

Pacing is deliberately slow to allow contemplative words to breathe and the cast to fully inhabit richly drawn roles including a star-making turn from wunderkind Ramona Edith-Williams, who strikes a perfect balance between cuteness and precocity.

Love means letting go in Shannon Murphy’s emotionally shattering debut, a stylistically bold and offbeat rites-of-passage drama comedy, which secured the Australian director a berth behind the camera of the third series of Killing Eve.

Screenwriter Rita Kalnejais deftly navigates first love in the shadow of terminal illness a la The Fault In Our Stars without resorting to emotionally manipulative tropes that often bedevil characters confronted by their mortality.

The heat of a summer in suburban Sydney ripples off the screen thanks to Andrew Commis’s saturated cinematography, exacerbating tensions between dysfunctional family members.

Eliza Scanlen, who faced a similarly grim prognosis as Beth in Greta Gerwig’s reworking of Little Women, delivers a fearless lead performance as a teenager at peace with her premature demise.

She is luminous as the glue holding together her parents’ fractured relationship, brought vividly to life in blasts of rage and despair by Ben Mendelsohn and Essie Davis.

Adapted from Christine Leunen’s novel Caging Skies, Jojo Rabbit is a daring comedy drama, which boldly recount one episode of suffering and redemption during the Second World War through the eyes of a 10-year-old boy, who claims the Fuhrer as an imaginary friend.

New Zealand writer, director and star Taika Waititi deservedly collected an Academy Award in February for his screenplay. He confidently walks a tightrope between heartbreak and hilarity, employing his quirky brand of humour to witness the rise of fascism and its devastating consequences.

He beautifully captures the naïveté of an impressionable tyke, who has hungrily devoured every syllable of Nazi propaganda and regurgitates it in the hope that unerring loyalty might be rewarded with early promotion to Hitler’s Special Guard.

By the film’s closing frames, his childhood innocence lies in tatters.