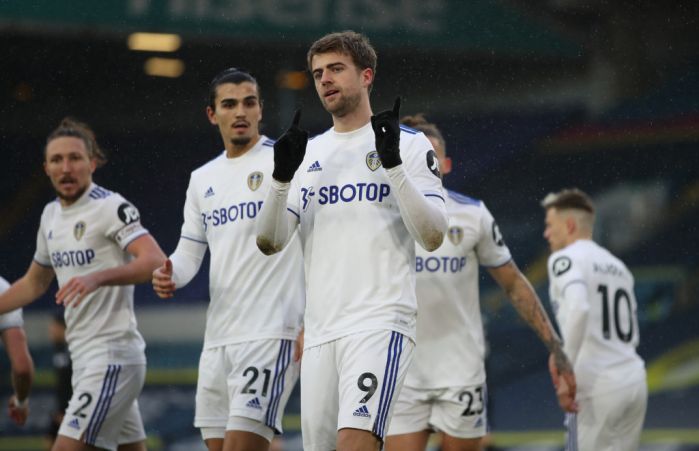 Bamford converted his 10th league goal of the season from the spot in the fifth minute and that was enough to secure his side their sixth Premier League win of the season.

Burnley, who began the day one place and four points behind Marcelo Bielsa’s side, had a first-half effort from Ashley Barnes controversially ruled out and dominated the second period.

But Leeds, who spurned a host of first-half chances, refused to buckle under the onslaught and inflicted upon Burnley their first defeat in five matches.

Bamford fired his penalty into the top corner to give Leeds an early lead after he had been brought down by Burnley goalkeeper Nick Pope.

The Leeds striker had raced into the box on to a long diagonal ball from Luke Ayling, who was skipper for the day in Liam Cooper’s absence.

Bielsa’s side, showing no ill-effects from last week’s humbling defeat at Manchester United, threatened again through Rodrigo, but his shot was comfortably gathered by Pope.

Barnes thought he had equalised for Burnley in the 17th minute, but referee Robert Jones had already blown for a foul on Leeds goalkeeper Illan Meslier.

It appeared to be a harsh decision and left Dyche and his backroom staff furious.

Both sides were guilty of glaring misses within the space of a minute just after the half-hour mark.

Jack Harrison’s goal-bound shot struck Bamford after Raphinha had capitalised on a defensive mistake and former Leeds striker Chris Wood headed over at the back post from Ashley Westwood’s cross.

Raphinha wasted another opening, shooting too close to Pope when free in the area and Rodrigo headed off-target following from Ezgjan Alioski’s superb cross.

Burnley took the game to Leeds after the restart. Matthew Lowton and Josh Brownhill forced Meslier into routine saves as Leeds were squeezed on to the edge of their area.

Bielsa sent on Pablo Hernandez for Rodrigo and Jamie Shackleton for Mateusz Klich in a bid to kickstart his side, but with 20 minutes to go the Clarets were still forcing the issue.

Only a brilliant save from Pope denied Hernandez after a lightning Leeds counter before Barnes fired straight at Meslier at the other end.

Dyche sent on Jay Rodriguez and Dale Stephens for Erik Pieters and Josh Benson and with Burnley chasing an equaliser, the action see-sawed in the closing stages.

Rodriguez fired over at the far post following Brownhill’s assist and Meslier produced a fine save to keep out Barnes’ stinging effort as Leeds stood firm amid a flurry of late set-pieces.