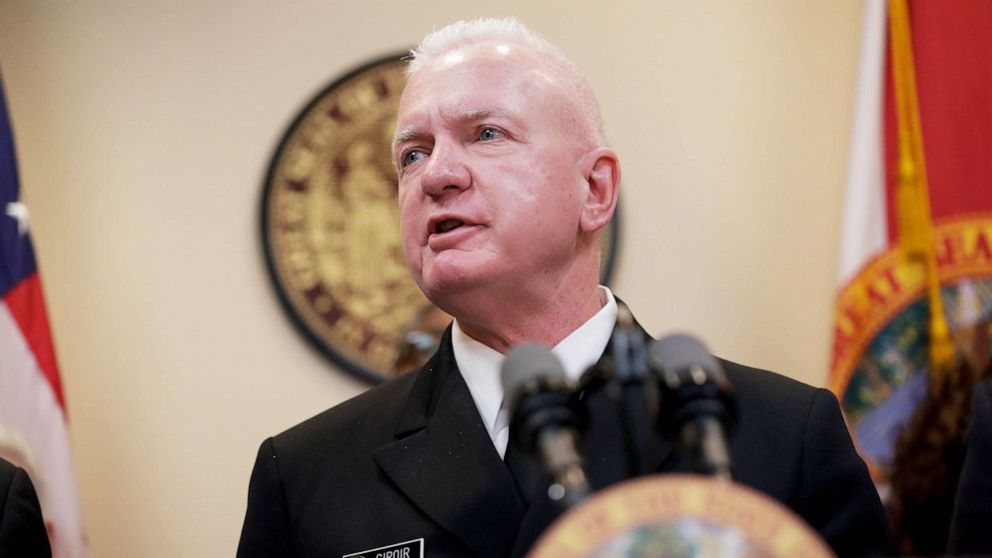 “I think leadership like the vice president, the surgeon general … should get vaccines because they will inspire confidence — with the people who believe in them and trust them,” Giroir told ABC News Chief Anchor George Stephanopoulos.

“And again, we have every reason to believe that this vaccine, these two vaccines, are very effective and they are safe,” he added. “So, you know, I would encourage the president to get a vaccine for his own health and safety and also to generate more confidence among the people who follow him so closely.”

Trump is open to taking the vaccine, White House Press Secretary Kayleigh McEnany said at a press briefing Tuesday, but the Centers for Disease Control and Prevention recommends that people who receive the monoclonal antibody cocktail treatment, which the president did in October, wait 90 days before getting vaccinated. The president also wanted to prioritize front-line workers and those in long-term care facilities, McEnany said.

President-elect Joe Biden and Dr. Jill Biden are expected to be vaccinated Monday.

One Friday, the Food and Drug Administration authorized a second vaccine from Moderna, and distribution of the vaccine began Sunday morning.

Despite the availability of two vaccines, Stephanopoulos pressed Giroir on allegations that vaccine doses were cut which Giroir responded to by saying that states are now “squared away.”

“There were some initial projections in November, that was even before we had any vaccine authorized much less two authorized,” he said. “The specific projections for this week were given on Tuesday of last week. And those are on track.”

Giroir added that a third vaccine produced by Janssen, the pharmaceutical company owned by Johnson & Johnson, is expected to be submitted for authorization in January.

Stephanopoulos also asked Giroir about recent reports of allergic reactions. As of Friday night, six people have had allergic reactions to the vaccine, the CDC said Saturday according to the Associated Press, including one person who has a history of vaccination reactions.

Giroir said adverse effects are immediately reported to the Food and Drug Administration and the CDC investigates them.

“We’re going to watch these absolutely carefully,” he said. “They’re immediately reported. And if there’s any change in the … recommendations, they will come out. The CDC updated their recommendations last night, just to be sure that, if you have an allergic reaction to any vaccine, you probably shouldn’t take this one.”

“It’s widely recommended for everyone because we know it’s 95% effective, as much as 100% effective at preventing severe disease,” he added. “And this is the way we end the pandemic, by getting 70% or 80% of the American people vaccinated.”

The pandemic continues to surge nationwide heading into the holiday week. The U.S. reported, 249,709 new cases of COVID-19 as of Friday, a record number, according to data from John Hopkins University. As of Saturday evening, there are more than 113,000 people hospitalized with COVID-19, according to data from the COVID Tracking Project.

Giroir said Sunday that although the end of the pandemic is in sight, Americans still have a lot of work to do.

“The lives of tens of thousands of Americans depend on what we do. And you know what to do, George,” he said to Stephanopoulos. “It’s wearing a mask when you’re in public, physically distancing, washing your hands. If you’re having holiday gatherings, please do them safely. Try to limit them to your immediate household.”

Trump has learned nothing

Will Biden wage a confirmation battle over attorney general? Some current DOJ insiders hope so

Check Also
Close
Live COVID-19 statistics for
World
Confirmed
81,266,311
Recovered
45,688,343
Deaths
1,764,756
Popular Posts
Facebook Twitter WhatsApp Telegram Viber
Back to top button
Close
Popular Posts
Most Commented
x
More Information
We and our partners use technology such as cookies on our site to personalise content and ads, provide social media features, and analyse our traffic. Click below to consent to the use of this technology across the web. You can change your mind and change your consent choices at anytime by returning to this site. Read more
I accept
Cookies Settings
Cookie Box Settings
Cookie Box Settings