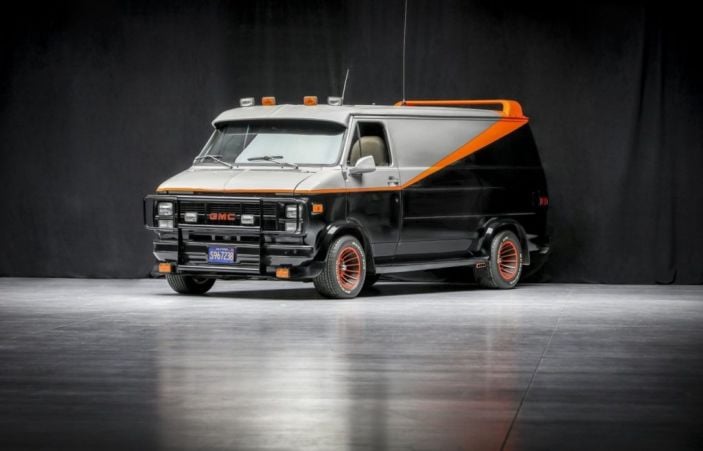 The current pandemic is generating in so many of us a strong wish to be somewhere, even some-when, else. Those of us who grew up in the 1980s are probably more than a little keen to head back to what seemed, then, to be a simpler, easier time. Well, now we kinda-sorta can, at the wheel of our very own A-Team van.

The crack commando unit, imprisoned for a crime they didn’t commit, who survived as soldiers of fortune, may be long since retired, but one of the original GMC Vandura vans, in that iconic black-and-grey, with red stripe and roof spoiler colour scheme is being auctioned by Worldwide Auctions, which normally holds its auctions in Scottsdale, Arizona, but which of course right now is being held online. The A-Team Vandura will cross the auctioneer’s block on January 23rd, which maybe gives us all enough time to save up.

The Vandura, chassis number CGL2590138307, was one of six given to the makers of the A-Team, and used in promotional tours around the USA and Canada between 1983 and 1987. Which means, sadly, that it was never an actual on-screen star during the making of everyone’s favourite Saturday afternoon action series, but it is, at least tangentially, a part of that history.

“Instantly recognisable as one of TV’s most iconic vehicles, this is a highly entertaining promotional and exhibition vehicle that would be welcome at shows and events everywhere,” said John Kruse, principal and auctioneer. “We’re excited to be selling it without reserve at home here in Auburn, along with four additional classics, to benefit such an inspiring national cause.” That cause being the J. Kruse Education Center, a dedicated organisation providing career pathway development to students and transitioning military veterans.

Mind you, if you’re going to import it here, you might have some explaining to do what with the prop shotgun, M-16 automatic rifle, and Uzi sub-machine gun strapped to the insides. Oh, and the M-60 belt-fed machine gun mounted in the rear compartment.

Also, on the inside are the four captain’s chairs that made the Vandura seem so much cooler than your dad’s Transit, and the pop-up sunroof over the driver’s seat, through which BA could stand up and let loose a volley of pity towards any fools in the vicinity. There’s also a vintage CB radio.

Visually, the van appears to be in solid condition and has 90,000-miles on the odometer. Don’t go expecting to out-run any Military Police in the area, though. The original Vandura came with a weedy V6 engine, and legend has it that the stunt crew for the A-Team used to have to coat the rear tyres in grease so that it could perform smokey getaways. Still, imagine the fun you could have on the school run with this.