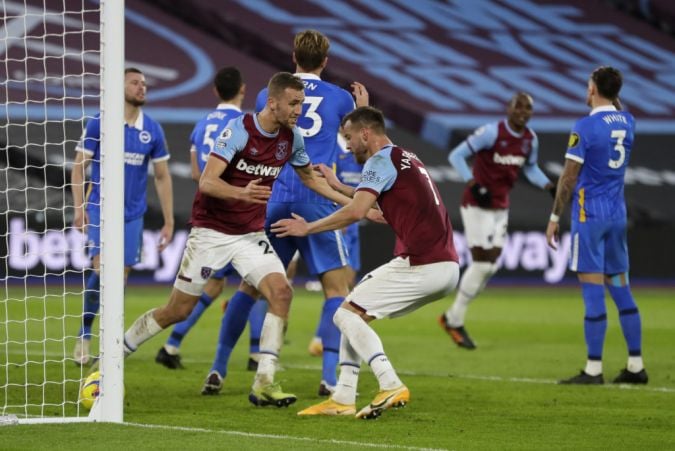 The below-par Hammers trailed twice at the London Stadium with a controversial Lewis Dunk strike looking set to hand Brighton only a second win in 13 matches.

But Soucek struck with eight minutes remaining to snatch a 2-2 draw for David Moyes’ side.

Nevertheless, the result extended Brighton’s hoodoo over the Hammers, who have still never managed to beat them in the Premier League.

Perhaps with that in mind West Ham seemed to set up to allow Brighton to keep the ball and hit them on the counter-attack.

But only the first part of the plan worked in the first half with a front three of Sebastien Haller, Jarrod Bowen and, bizarrely, captain Mark Noble, not exactly renowned for their pace.

Brighton took the initiative and Danny Welbeck’s angled shot flew over in the second minute.

It finishes all square at London Stadium. #WHUBHA

Then Solly March swung in a tempting cross from the left but Welbeck could not get the crucial touch under pressure from Angelo Ogbonna.

Adam Webster headed straight at Lukasz Fabianski and March hit he side-netting before also forcing a save from the Hammers keeper with a low drive from the edge of the box.

The visitors took a deserved lead a minute before half-time when Dan Burn overlapped down the left and crossed low into the box.

Declan Rice attempted to intercept the ball but succeeded only in putting it on a plate for Neal Maupay, who swivelled and tucked his shot past Fabianski.

Noble and Bowen were put out of their misery at half-time with Manuel Lanzini
and Andriy Yarmolenko summoned from the bench.

West Ham did not have a shot on target against Chelsea last Monday, nor in the first half here.

So early in the second half, when Haller met Rice’s cross with a header straight at Robert Sanchez, it was their first effort on target for 172 minutes.

The substitutions paid dividends on the hour mark when Yarmolenko crossed from the right and Lanzini touched the ball into the path of young full-back Ben Johnson, who calmly side-footed in his first goal for the club.

West Ham now looked in the ascendancy, but it was Brighton who struck next.

Soucek’s attempted clearance from a corner appeared to hit Dunk on the forearm before he fired home, but after a lengthy VAR check the goal was given.

But Soucek got his revenge with eight minutes remaining. Amazingly, this time it was Dunk’s clearing header which hit the Czech midfielder as he arrived at the far post to bundle in the equaliser.