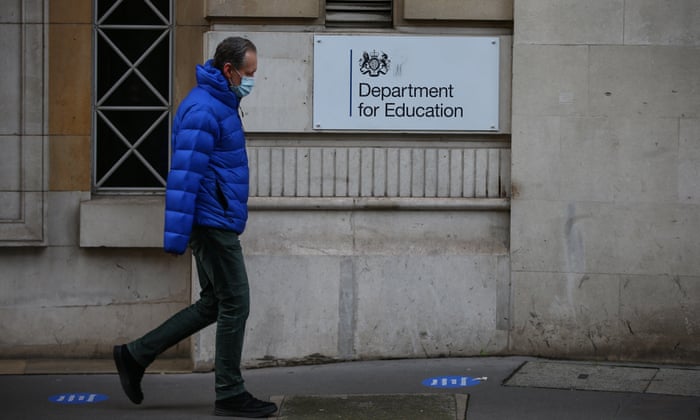 There is growing pressure on the government to delay next week’s return to school for millions of children as teaching unions and experts continue to urge caution over the safety of staff and pupils.

Amid a worsening pandemic and growing concern about the new strain of Covid-19 spreading from London and the south-east, teaching unions have asked the government for more clarity on why sending children back to classrooms will not put them at risk.

They are asking for more effective testing to be introduced and a better strategy in place before ploughing ahead with plans. It comes as debate is under way within the government over the risk of a surge of infections as ministers are understood to be divided over the announcement by the education secretary, Gavin Williamson, about a phased return for pupils.

The pressure grew as NHS England said it had a record 20,426 people in hospital being treated for Covid-19 as of 8am on Monday, surpassing April’s peak of 18,946. Health officials in Wales and Scotland have also said they fear becoming overwhelmed.

A leading social scientist said the new strain of Covid-19 “changed the game” in terms of schools reopening. Dr Zubaida Haque, the former deputy director of the race equality thinktank the Runnymede Trust, said: “The key question is are schools safe enough right now? Has the government made schools safer and, in making it safer, can we then keep schools open?”

Speaking to Good Morning Britain, she said: “Right now we have a critical situation: yesterday we had the highest number of daily Covid cases, over 41,000 cases of coronavirus in this country.

“By Christmas Day we had more people in hospitals than at the peak in April this year, so we are in a crisis situation now.”

She added: “The government has delayed opening parliament because we are in a crisis situation but yesterday we had Michael Gove saying, ‘No, it’s fine, we’re going to have schools open next week and we’ll have a staggered return’ and, frankly, that’s not acceptable, and that’s not safe.”

The head of the Association of School and College Leaders (ASCL) called for “a more grownup” debate around the plans. Speaking to Good Morning Britain, Geoff Barton said: “This doesn’t have to be binary – it doesn’t have to be all young people in school or not in school.

The union leader added: “What we could be doing is reducing the number of young people in schools while we get that testing in place, making sure we focus on those young people who we need to have in school, trusting the other ones not to be in school.

“Why don’t we have a more nuanced debate about it? A more grownup attitude, and why don’t we trust our school and college leaders who, frankly, are looked to for real leadership by their local communities?”

Steve Chalke, the founder of Oasis, one of the largest multi-academy trusts in England, told BBC Radio 4’s Today programme: “We would ask the government to pause, to come up with a clear strategy for the continuity of education. We think that means a short delay to think things through.

“We would suggest a week or two’s delay to think it through, to do it well – and we think that if you really care about kids you would do this well – to invest now, to give time now makes sense.”

Barton said the ASCL union supported the phased opening of schools with a testing system already in place, set up with the support of health services and the military.

He told BBC Breakfast: “What that would then allow would be the phased introduction of children from next week and for us not to be on the back foot in implementing something we haven’t heard about until the day before Christmas Eve, but to be able to do it in a planned way.

“Those people that are calling for a delay to young people coming back [to school] are doing it on the principle that we should get this testing right and we should listen to what the scientists are saying.”

Families of Covid victims in Italy take government to court