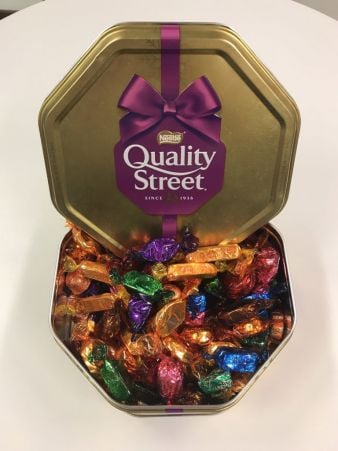 Christmas just isn’t Christmas without a tin of Quality Street – and everyone has an opinion on the good, the bad, and the fruit cremes.

It turns out some people really do love The Green Triangle

Including Michel Roux Jr. “What’s the name of the green one? The triangle? Send them to me,” says the Michelin starred chef.

Former Bake Off contestant Kim-Joy, author of Christmas With Kim-Joy (Quadrille), is also keen on these ones: “It’s like a nutty, smooth chocolate.” However, she adds, “I’m actually quite fussy of chocolate… those green triangles are really nice.”

In The Purple One camp, we have…

Fitness guru Joe Wicks (30 Day Kick Start Plan, Bluebird) says: “I like the big purple one. It’s like caramel with a nut in the middle.” But he can, on occasion, also be swayed by the Orange Chocolate Crunch.

Oh Cook! presenter James May meanwhile, gets Roses and Quality Street mixed up (sacrilege, he knows), but says his “favourite Roses is the orange foil one; my favourite Quality Street is in a very dark purple cellophane wrapper and it’s almost the shape of a brazil nut.”

He has been known to cause a ruckus on Quality Street too. “I got into a debate on Twitter once because I asked why they put The Green Triangle in. You end up with 20 of those in the bottom – I was torn to pieces,” May admits.

Dave Myers of The Hairy Bikers (their new book is called Veggie Feasts) is another fan of The Purple One, calling it “the everyday man’s bacon sandwich of the chocolate world,” while his least favourite is “that Toffee Penny in the yellow cellophane”.

Si King, Myers’ Hairy Bikers teammate, also avoids the Toffee Penny: “You always leave them until last, don’t you? Because there’s a chance they may pull your fillings out.” He much prefers the “strawberry cremes and the orange cremes”.

As does Kate Young – author of The Little Library Christmas (Head of Zeus). However, she “grew up with Roses not Quality Street, and our Roses in Australia are different Roses. I’m terrible at the colours because the colours mean something different to me. So I really like – and this is not a popular choice – the orange. I love the coconut, but I love the crunchy orange one.”

For Tom Kerridge – whose new cookbook is called The Hand And Flowers (Bloomsbury) – there are no favourites. “Quality Street, to be honest, I’ll eat them all. However, The Purple One’s a winner every time.”

He does have strong views on the ultimate Christmas chocolate though. “It is, every time, a Terry’s Chocolate Orange. The white one I’m not big fan of, dark chocolate I quite like that, goes well with a cup of coffee, but if it was just standard chocolate eating, then the milk chocolate one I’d always go for.