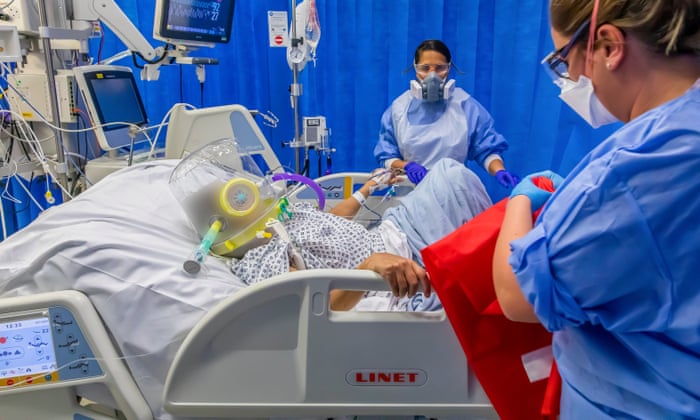 Hospitals could soon face “horrendous choices” about which Covid-19 patients receive potentially life-saving treatment because the NHS is so dangerously overloaded, doctors fear.

The warning came as calls grew for the whole of the UK to be put into a new lockdown, and for a delayed return for schools after the Christmas holidays by up to a month to help stem the massive rise in coronavirus infections.

The health service is struggling to cope with record numbers of Covid cases to such an extent that some patients may be denied access to an intensive care unit or the chance to go on a mechanical ventilator, the Hospital Consultants and Specialists Association (HCSA) said on Tuesday.

Pressure for a toughening of the government’s tactics against Covid comes as Matt Hancock prepares to update MPs on Wednesday about how well the tiers system of restrictions on everyday life in England are helping to contain the disease’s resurgence.

The health secretary may announce the creation of a new tier 5 in England – which would be tougher than tier 4, the category London and much of southern England are already in – and put areas now in tier 3 into tier 4 in an effort to halt the rapid escalation in infections, which on Tuesday hit a new record of 53,135. Scotland already has a five-tier system.

Increasing numbers of hospitals are moving closer to being overwhelmed by the number of patients needing emergency care because of Covid.

In a stark illustration of the growing crisis, some ICUs in London – which is once again the worst affected part of England – are now so overloaded that doctors have asked for some patients to be transferred hundreds of miles away to Yorkshire to get a bed and help reduce the pressure on their services, the Health Service Journal reported.

In another vivid example the Royal Free hospital in London is planning to move its children’s inpatient facilities to another hospital so it can use the space freed up to house adults suffering from Covid and non-Covid illnesses. It has also decided to turn the acute admissions unit at Barnet general hospital, which it runs, into extra capacity for Covid, staff were told in an email on Tuesday.

A senior manager at the trust, which now has 424 inpatients with Covid, said: “London Gold call has indicated that this position is expected to escalate for the next two weeks with 4 January potentially the zenith of critical care capacity needed.”

The Independent Sage committee of scientific and medical experts is urging ministers to instigate an immediate further UK-wide lockdown to try to prevent an imminent “catastrophe”. Any delay will result in tens of thousands of lives people who could otherwise have been saved, it said.

The committee, headed by the government’s former chief scientific adviser Sir David King, also said schools should remain shut until the start of February because their planned reopening from next week risked worsening the already fast-deteriorating situation, especially given the new variant that has emerged that is more transmissable and appears to be more readily infect under-18s.

“Things are as bad as they have ever been. The frightening thing is that they are going to continue to get worse. Action is needed now to avoid the collapse of the NHS in a few weeks. It is that serious”, said Christina Pagel, a member of Independent Sage and professor of operational research at University College London

NHS Providers, which represents hospital trusts in England, also demanded more robust action. Referring to the Tiers review, Saffron Cordery, its deputy chief executive, said: “It will require difficult decisions, moving millions more people to the highest level.” A toughening is needed urgently because pressures on the NHS in some places is “rising at an unsustainable rate”, she said.

Keir Starmer sounded a stark warning about the crisis facing the NHS and schools over the next month. The Labour leader told the Guardian that the UK was “staring down the barrel” of a third lockdown in January.

Dr Claudia Paoloni, a consultant anaesthetist in the NHS and president of the HCSA, said ICU staff may end up having to in effect ration who received care that could help them survive.

“Our NHS just doesn’t have the beds to cope. Some areas will be overwhelmed in days. If ventilation capacity is exceeded, horrendous choices will have to be made over those who live and die.

“The choices will be things like: which patients to admit to intensive care and which can only have limited care, excluding intensive care; how long to keep trying all stops maximum therapy on someone who appears to be making little progress when someone else comes into the intensive care unit and needs a haemodialysis machine when there are only limited numbers of machines; and who gets an intensive care or ventilatory support bed if all are being used,” she said.

Paoloni also warned that hospitals may have to stop providing non-Covid care, even including cancer surgery, despite NHS England’s promises to try to protect such treatment during the second wave. A hospital may have to ask itself ‘can we do the cancer surgery today or not, as we only have limited beds and no spare intensive care capacity for emergencies if we use the last bed for a major cancer operation?’,” she said.

Screening for diseases such as cancer may also have to halt and patients have to wait longer for an ambulance to respond to a 999 call, she added.

With the NHS facing the most serious emergency in its 72-year history, some hospitals are considering setting up tents outside in which to triage patients. This is in response to the long queues of ambulances that are building up outside many A&E departments, containing patients who sometimes spend hours in the vehicles waiting admission.

Ambulances were seen queueing on Tuesday outside hospitals including the Royal London hospital in Whitechapel and Queen’s hospital in Romford, both in east London, and Queen Elizabeth hospital, Birmingham.

The tent plan was revealed by A&E consultant Dr Simon Walsh, the deputy chairman of the British Medical Association’s consultants committee, who said it was the sort of measure usually used after a major incident such as a terror attack or industrial disaster.

NHS staff were preparing for a “worsening, increasing number of admissions” with Covid in the next few weeks as the number of infections continues to spiral, he said. Walsh urged the government produce a plan to respond to the increasing chaos in the service.

The Doctors’ Association UK said Covid had led to “a cataclysmic escalation” in the strain the NHS was under in recent days. The organisation’s president, Dr Samantha Batt-Rawden, said: “The NHS in the south-east is in meltdown. ICUs in the south-east are overflowing, with doctors telling us that their hospitals are running out of non-invasive ventilators and even basics like oxygen.”

Richard Mitchell, chief executive of the Sherwood Forest group of hospitals in Nottinghamshire, tweeted that: “Today will be a difficult day, tomorrow may be tougher and the next couple of weeks are likely to be the busiest and most challenging we have ever faced in the NHS.”

The Department of Health and Social Care said: “There is no shortage of ventilators and we have enough oxygen to meet demand.

“Throughout this global pandemic we have done whatever it takes to protect the NHS and save lives, including ensuring everyone who needed a ventilator had access to one.”