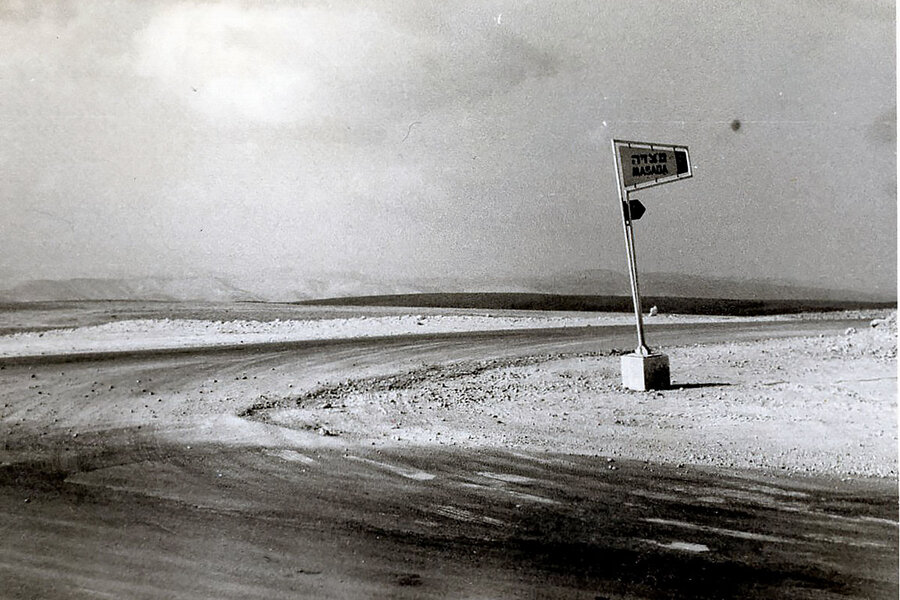 It’s cold in the bus; there’s no heater, and the December night is damp and chilly. The narrow road is roughly paved, the only route from Beersheba to Arad, Israel, in the Negev Desert. We see no lights, few cars, barely any signs of civilization. Occasionally, we pass a bus stop with a crude bench and a dim street lamp, meaning that a kibbutz is nearby. Often when I make this two-hour journey, some young Bedouin man will suddenly get up from his seat and pull the cord. As the bus jerks to a stop, he will exit and stride confidently off into the total darkness of the desert night. With no road sign or anything else to mark the spot, I wonder if it is sheer instinct that tells him where to get off, or if there is a boulder or shrub that only he can see, marking the path to his camp.

At this moment in 1970, I’m not as confident about finding my own path. I’d recently arrived in Israel to study in an ulpan, an intensive language program where recent college graduates spend five months learning Hebrew with the goal of finding jobs and remaining in Israel. Anxious and uncertain, I’d left my mother’s home in Manhattan to join my cohort, having no idea what to expect.

Part of what had drawn me here is the challenge of adapting to unfamiliar surroundings, far from home – a need to prove my independence. But part of my desire to live in Israel was also an unspoken wish to honor my father’s memory. He and my mother had fled Europe in 1938; the vast majority of their relatives perished in the Holocaust. I knew that my father – who had died suddenly two years ago – would have been proud to have his daughter live in Israel.

Arad was then a town of 6,000, surrounded by the dusty scrub-covered expanses of the Negev. Oddly, I’d immediately felt at home here: While it was new to me, the desert felt familiar and comforting. To escape the company of the other 200 ulpan students, I’d take walks alone. The air was clean and soft; the wind died down at dusk and fog enveloped the distant hills. I’d stand and watch as camels sauntered past.

I tried to meet real Israelis. On a solitary walk, I encountered a polite young Israeli engineer who was single and eager for companionship. He invited me to spend the evening with him in Beersheba, at the movies and dinner with him and his friends. Since both the film and our conversation were exclusively in Hebrew, when I returned to my ulpan class, my language skills had improved enormously. Sadly, there was no romantic spark between us, but it became an enjoyable way to learn the language.

Trump’s final days: A transition unlike any other in U.S. history

Each morning, an Israeli tank patrol searched the nearby roads along the border with Jordan, looking for mines. The soldiers lived in a camp nearby, and were excited to discover the ulpan’s amenities and especially the fact that actual American and British women were present.

When the soldiers invaded the ulpan’s recreation room, I befriended their boisterous and charismatic leader, Nissim. He was gregarious, loud, and very funny. Barely 21, he seemed very mature, having seen combat with his recon unit.

Later, he invited me to lunch at the army camp. He picked me up in a jeep, and we bounced over a rutted unpaved road to the base. When we arrived, I was treated as a visiting foreign dignitary.

After lunch, touring the base, I casually mentioned my ability to handle a manual transmission. Nissim promptly arranged for me to drive a half-track, a huge army transport fitted with tank treads. Sitting high in the driver’s seat, I felt like a true Israeli – unafraid and strong.

I dreamed of staying on in Israel, but in 1974, following the trauma of the Yom Kippur War, I reluctantly moved back to New York, leaving many new friends and a job that I loved in Tel Aviv, succumbing to family obligations. But I took with me the confidence that I had gained by living in a new country, becoming fluent in a new language, and managing on my own.

While I had not become as certain of my path as the young Bedouins on the bus, the ulpan and the desert had pointed my way to becoming an adult.

When is the proof in the pudding, anyway?

The lesson of the leather suitcase