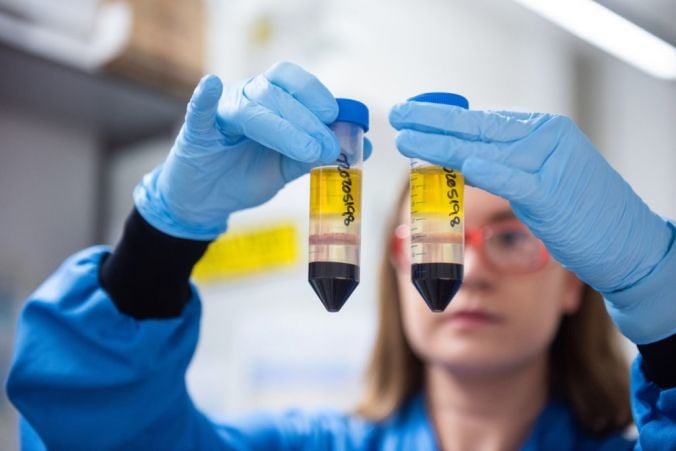 A researcher working on the Oxford/AstraZeneca vaccine, © PA Media

A Covid-19 vaccine from Oxford University and AstraZeneca has been approved for use in the UK, paving the way for mass roll-out.

The jab, which has been described as a “game changer”, was given the green light by the Medicines and Healthcare products Regulatory Agency (MHRA).

The UK has ordered 100 million doses of the vaccine – enough to vaccinate 50 million people.

A Department of Health and Social Care spokesman said: “The Government has today accepted the recommendation from the Medicines and Healthcare products Regulatory Agency (MHRA) to authorise Oxford University/AstraZeneca’s Covid-19 vaccine for use.

“This follows rigorous clinical trials and a thorough analysis of the data by experts at the MHRA, which has concluded that the vaccine has met its strict standards of safety, quality and effectiveness.”

Data published in The Lancet medical journal in early December showed the vaccine was 62% effective in preventing Covid-19 among a group of 4,440 people given two standard doses of the vaccine when compared with 4,455 people given a placebo drug.

Of 1,367 people given a half first dose of the vaccine followed by a full second dose, there was 90 per cent protection against Covid-19 when compared with a control group of 1,374 people.

The overall Lancet data, which was peer-reviewed, set out full results from clinical trials of more than 20,000 people.

Among the people given the placebo drug, 10 were admitted to hospital with coronavirus, including two with severe Covid which resulted in one death.

But among those receiving the vaccine, there were no hospital admissions or severe cases.

The half dose followed by a full dose regime came about as a result of an accidental dosing error.

However, the MHRA was made aware of what happened and clinical trials for the vaccine were allowed to continue.

In an interview with the Sunday Times, AstraZeneca chief executive Pascal Soriot suggested that further data submitted to the regulator showed the vaccine could match the 95 per cent efficacy achieved by the Pfizer/BioNTech and Moderna vaccines.

“We think we have figured out the winning formula and how to get efficacy that, after two doses, is up there with everybody else,” he said.

On Monday, Calum Semple, professor of outbreak medicine at the University of Liverpool and a member of the Scientific Advisory Group for Emergencies (Sage), described the vaccine as a “game changer” but said it would take until summer to vaccinate enough people for herd immunity – when the virus struggles to circulate.

“To get the wider community herd immunity from vaccination rather than through natural infection will take probably 70% to 80% of the population to be vaccinated, and that, I’m afraid, is going to take us right into the summer, I expect,” he said.