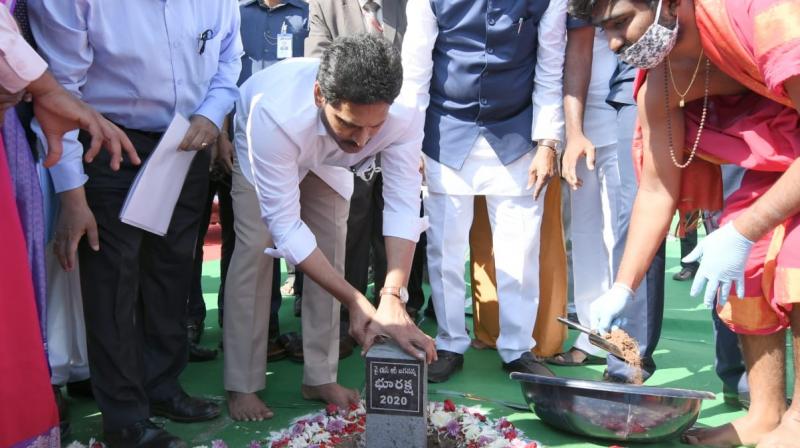 VIJAYAWADA: After almost seven postponements, the much-awaited flagship welfare scheme of YSR Congress government ‘Navaratnalu-Pedalandariki Illu’ is all set for its launch on Friday marking this year’s Christmas. Spread over 15 days, house pattas would be distributed to 30 lakh women across all districts barring those having court cases.

This is in keeping with the Chief Minister Y.S. Jagan Mohan Reddy’s padayatra promise of providing pucca houses to the poor. The Chief Minister will initiate the programme at Komaragiri layout of U Kothapalli mandal in East Godavari district. The day will also mark the commencement of construction of 15.60 lakh houses in the first phase. In addition to these, the government will also distribute sale agreements for 2.60 lakh TIDCO houses.

The government had initially decided to launch the massive event on Ugadi (March 25). Coronavirus and later PILs in courts thwarted the programme, including those planned for Ambedkar Jayanti, Gandhi Jayanti and Independence Day.

The government finally decided to distribute house site pattas in those areas, where there were no court cases. The remaining beneficiaries will be given D-form pattas. Once the legal cases are resolved, land deeds will be given in the name of women beneficiaries.

For the first time in the country, a house site patta is being given for just one rupee and it will be registered in the name of a woman member of the household. The beneficiaries will be given 1.5 cents in rural areas or one cent in urban areas.

15.60 lakh houses to be constructed in first phase

The government has decided to have the quality of houses inspected by experts from IITs and NIT. Each house will consist of one bedroom, living room, kitchen, toilet and verandah, with a total plinth area of 340 sq.ft. and will be provided with basic facilities like lights, fans, overhead tank and water connection. AP Tidco has already undertaken the construction of 2,62,216 houses across the state. The houses are being constructed on three floors with an area of 300, 365, 430 sq. ft.

YSRC, TD in war of words over house sites

TD leaders alleged that YSRC legislators and leaders have looted Rs 6,500 crore worth public money in the name of the housing scheme but the ruling party refuting the same claimed that unable to digest the good name of YSRC, the opposition parties are trying to defame the government with baseless allegations.

Meanwhile, the TD conducted a photo exhibition in the party State office on Thursday showing photos of low-lying areas, hilly places, graveyards and alluvial soils, which were unfit to construct houses and which are selected for house site distribution programme.

Former minister Devineni Umamaheswara Rao said that the Chief Minister had got many palaces in different metro cities but his regime was giving just one and half-cent in rural areas and one cent in urban areas. He stated that if the State was spared from the Rs. 6,500 crore looting of public funds, then over 13 lakh families could have got one additional cent. He alleged that the ruling party legislators and leaders had committed corruption in 40 Assembly segments and looted Rs. 4,000 crore in land acquisitions, Rs. 2,000 crore in levelling of lands and another Rs. 750 crore in the form of collections from the allottees.

Minister Kodali Srivenkateswara Rao, Perni Venkataramaiah and other leaders of ruling party refuted the allegations of TD. They claimed that the TD government committed corruption in the house construction and failed to provide houses to beneficiaries. The YSRC government is offering house sites free of cost and in a transparent manner.

The Trump-Bernie alliance that could have been