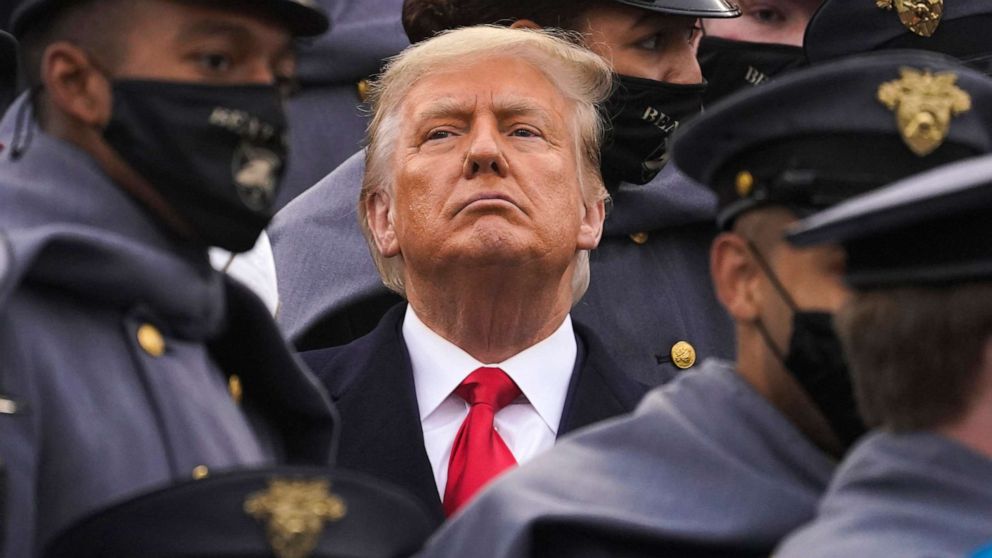 President Donald Trump is spending his dwindling days in office entertaining increasingly desperate, last-ditch schemes to overturn the results of the presidential election, relying on a lawyer who, like him, has furthered conspiracy theories, and on a former adviser who has advocated for martial law.

While he continues to raise funds from his supporters, his unprecedented efforts have so far failed, and on Monday, he received pushback from the outgoing U.S. attorney general, Bill Barr. His senior White House advisers, who themselves have been alarmed at the ideas the president has discussed, have generally tried to modulate his views.

Trump has contemplated ordering the U.S. Department of Homeland Security to seize states’ voting machines and on Friday met with his former national security adviser, retired Lt. Gen. Michael Flynn, who has been publicly prodding Trump to declare martial law and order the military to oversee new elections in the battleground states that Trump lost, according to sources familiar with the meeting.

Asked by ABC News whether the president had legal authority to order the seizure of voting machines, Barr at a news conference Monday did not comment on the legality but said he did not currently see a reason to do so.

But just a day before the president met with Flynn in the Oval Office, the former national security adviser told the conservative news outlet Newsmax that Trump “could take military capabilities and he could place them in those states and basically rerun an election in each of those states.”

Meanwhile, sources said, the president has also considered trying to appoint Sidney Powell, an election lawyer who Trump had cut from his legal team, as a special counsel to look into the 2020 election — even though the president cannot do so under the auspices of the Justice Department, as would be typical.

Powell has been among the most vocal of Trump’s advisers to promote the idea that his 2020 election defeat was actually a mirage, the result of an array of forces that had plotted to steal the election from him. A series of scathing court rulings rejected those claims, as did experts on voting technology.

On Monday, Barr — who, as attorney general, does have the ability to appoint special counsels — rejected the idea that one would be necessary to look into the election, or to investigate allegations the president has made Biden’s son, Hunter Biden.

“To the extent that there’s an investigation, I think that it’s being handled responsibly and professionally, currently within the department,” Barr said, when asked about Hunter Biden. “And to this point, I have not seen a reason to appoint a special counsel, and I have no plan to do so before I leave.”

Asked specifically whether he would support making Powell or someone else a special counsel to investigate the election, he said it was not necessary.

“If I thought a special counsel at this stage was the right tool and was appropriate, I would name one, but I haven’t,” Barr said. “And I’m not going to.”

Powell joined Trump, Flynn and others in a heated Oval Office meeting Friday night, and she returned to the White House Sunday, although it was unclear with whom she had met or spoken with, according to people familiar with the visits.

She was back at the White House Monday as well for meetings. It was unclear whether she saw Trump.

At the Friday gathering, the assembled group pondered an executive order to seize and examine voting machines across the country, after Trump’s personal attorney, Rudy Giuliani, had initially raised the idea earlier in the week, according to one person.

The White House declined to comment on Powell, Flynn or the schemes Trump is considering to try to overturn the election results.

The president has not appeared publicly in nine days, and behind closed doors, advisers say, he has remained focused on the election — rather than governing the country through a historic pandemic, overseeing the rollout of two COVID-19 vaccines and ensuring a smooth transition to a Biden administration.

Even after the Electoral College last week gathered to vote, marking the latest step making Biden’s win official, Trump has continued to contest the result.

Both houses of Congress will gather on Jan. 6 to certify the election results, and Trump has been publicly pushing his congressional allies to launch challenges. At most, such moves could delay the formal, final certification of Biden’s win by several hours, since doing so would not garner the support of a majority of both chambers — which would be required to overturn the results.