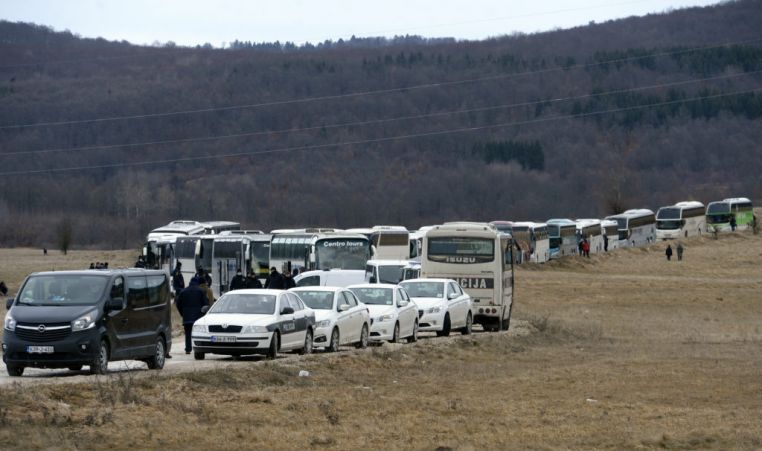 Migrants wait in buses to be relocated from the Lipa camp in north-western Bosnia, near the border with Croatia, © AP/Press Association Images

Hundreds of migrants from a burned-out tent camp in north-west Bosnia remain packed in buses where they had spent the night after an attempt to relocate them failed.

Bosnian authorities sent buses on Tuesday to transfer the migrants from the much-criticised Lipa camp to an army barracks in central Bosnia.

The mass move was cancelled after local residents organised protests to prevent the relocation.

On Wednesday morning and later in the day, migrants were still inside the buses, local media reported.

The Lipa camp near Bosnia’s border with Croatia was demolished in a fire last week and lacked basic facilities such as running water or heating.

Some 1,000 migrants were stranded there for days during a spate of snowy and windy winter weather that followed the fire.

The situation has prompted EU officials and aid groups to warn of a looming humanitarian disaster and increased pressure on Bosnia to act to move the migrants away from the camp.

The troubled Balkan country, which went through a devastating war in the 1990s, has been struggling with the influx of thousands of people seeking to reach western Europe.

Bickering among Bosnia’s ethnically divided authorities has prevented an organised response to the crisis, leaving some 3,000 migrants sleeping rough or in makeshift tents.

The head mufti of the Islamic Community of Bosnia, Husein Kavazovic, called for better treatment of migrants, describing the situation as “shameful” for both the country and the rest of Europe.

“We do not treat people in need in such a way,” he said in a statement.

Most migrants are staying in the north-west corner of Bosnia, where they hope to cross into European Union member Croatia before moving on towards wealthy EU nations.

To get to Croatia, migrants use mountainous illegal routes and often face pushbacks and alleged violence at the hands of Croatia’s police.