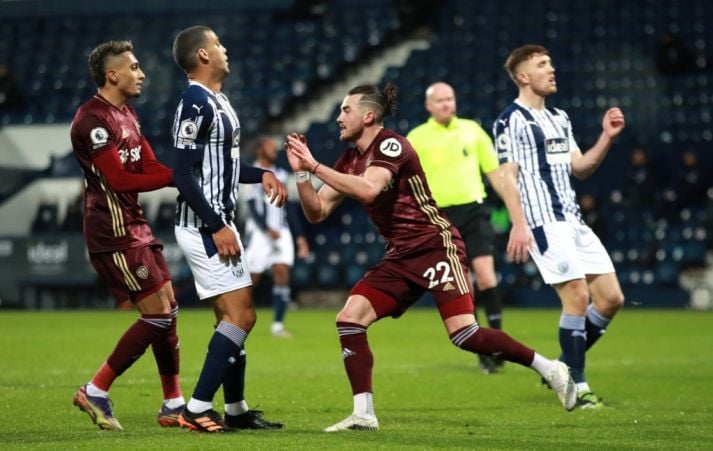 Leeds ran riot at West Brom to hammer the Baggies 5-0 and claim their biggest Premier League win for 17 years.

A first-half blitz from the visitors blew Albion away to leave Sam Allardyce looking for his first win as boss.

Romaine Sawyers’ awful own goal set the tone for the hosts before quickfire first-half goals from Ezgjan Alioski, Jack Harrison and Rodrigo.

Raphinha also netted in the second half as Leeds recorded their biggest victory in the top flight since a 6-1 win over Charlton in 2003.

Marcelo Bielsa’s side kept back-to-back clean sheets for the first time this season to climb to 11th.

Leeds have taken strides forward, using their risk and reward philosophy, and they demolished a Baggies side who were promoted to the Premier League with them last season.

The teams are going in opposite directions as Leeds’ roller coaster season continues, while second-bottom Albion are already facing an instant return to the Sky Bet Championship.

64’ Over an hour gone at The Hawthorns with the score still 4-0 to #LUFC pic.twitter.com/nbvs9Lka7H

They rolled the dice and appointed Allardyce after sacking Slaven Bilic this month and Sunday’s impressive point at Liverpool suggested the new manager’s methods had already sunk in.

But his side capitulated at home on Tuesday – not for the first time this season – and they have conceded 13 goals in their last three home games to sit five points from safety.

Their displays against the bigger sides – having taken a point off Manchester City and Chelsea, while losing by one goal against Manchester United and Tottenham – has not been in doubt. Albion needed to match it against others.

Yet, again, they failed to back those performances up and were behind after nine minutes following a nightmare moment for Sawyers.

Under pressure from Rodrigo, the midfielder tried a blind backpass to Sam Johnstone and failed to spot where the goalkeeper was.

It meant Johnstone, who had moved to the left of his goal, could only watch on as the ball rolled in.

No team have scored more own goals than the Baggies’ three in the Premier League this season and they had gifted Leeds a platform.

It was one Bielsa’s men took as they bossed possession with Albion never looking like they would mount a comeback.

The hosts had not come from behind to win in the Premier League for almost four years – since February 2017 – and that sequence would get longer thanks to three Leeds goals in nine minutes.

Alioski started the goalrush after 31 minutes when he spectacularly rifled the ball in off the post from the edge of the area.

It then got worse for the hosts five minutes later when the excellent Harrison swapped passes with Patrick Bamford, turned Darnell Furlong and found the top corner from close range.

Leeds were rampant and they continued to embarrass their hosts, making it 4-0 five minutes before the break when Rodrigo’s shot from 18-yards hit Dara O’Shea and deflected in.

It was another disaster for Albion and they needed to at least show some fight in the second half and Illan Meslier denied Grady Diangana early on.

But Leeds remained on cruise control and added the gloss with 18 minutes left when Raphinha wrapped up a sweeping move on the right by cutting inside and finding the top corner from the edge of the box.