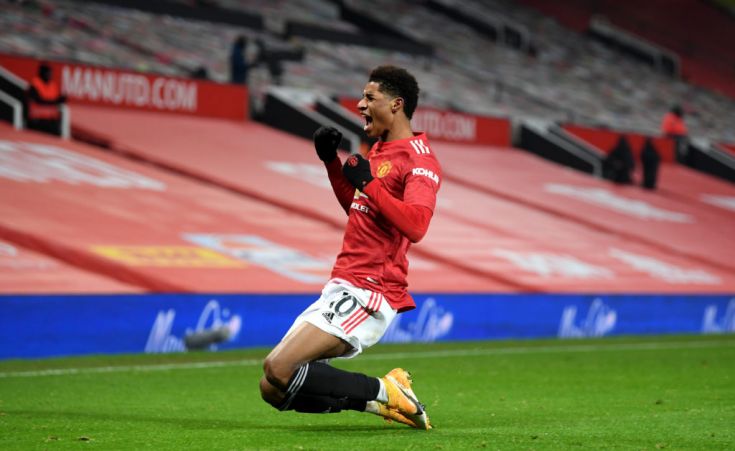 Marcus Rashford’s stoppage-time strike lifted Manchester United to within two points of the Premier League summit with a 1-0 win over Wolves.

The short-handed visitors looked to have withheld a late onslaught but Rashford’s shot in the third minute of time added on took a big deflection off Romain Saiss to leave Rui Patricio wrong-footed and United celebrating a fourth win in five.

Liverpool face Newcastle on Wednesday night but United will retain a game in hand on the champions, with this result adding credence to their own title challenge this term.

Edinson Cavani had earlier seen a strike ruled out for offside.

Leeds claimed their biggest Premier League win in 17 years as they outlined the full scale of the task facing Sam Allardyce with a 5-0 win over West Brom at The Hawthorns.

Romaine Sawyers’ awful own goal was just the start as Leeds put together a first-half highlights reel with fine goals from Ezgjan Alioski, Jack Harrison and Rodrigo.

Raphinha also netted a superb strike in the second half as Leeds recorded their biggest victory in the top flight since a 6-1 win over Charlton in 2003.

I take full responsibility for setting the tone for what went on to be a difficult night for us all to stomach! We have to continue to try and put things right as individuals and as a teams to achieve what we want to this season

In a week where Leeds boss Marcelo Bielsa has faced criticism of his tactics, his side made a mockery of that with an incisive display which wiped out their deficit in the goal-difference column and moved them firmly into mid-table.

But the result leaves Allardyce still seeking his first win since taking charge of a side now five points adrift of safety.

Still, West Brom’s situation looks considerably better than that of Sheffield United, who went down 1-0 at Burnley to remain winless in the league heading into the new year and now 11 points adrift of 17th place.

Ben Mee’s first-half header left Chris Wilder’s side with just two points from 16 games, the first top-flight team without a victory at this point on the calendar since Bolton in 1902-03.

To add to their woes, there were questions over whether the fixture would even go ahead after the Blades reported a new coronavius outbreak at the club before kick-off.

Instead, Burnley fans could celebrate as talk of a takeover gathered pace before kick-off.

The win leaves them five points above the drop zone, but looking like a sound investment at present with only one defeat in their last six.

Arsenal followed up their encouraging win over Chelsea with another three-point haul as Alexandre Lacazette scored within 21 seconds of coming on as a substitute to beat Brighton 1-0.

Beleaguered Brighton remain just two points above the drop zone after failing to end their lengthy wait for a victory at the Amex Stadium.

Southampton, playing without manager Ralph Hasenhuttl as the Austrian self-isolates, took a point from a goalless draw at home to West Ham.

2020 wasn’t all bad: sporting tales that lifted the lockdown gloom