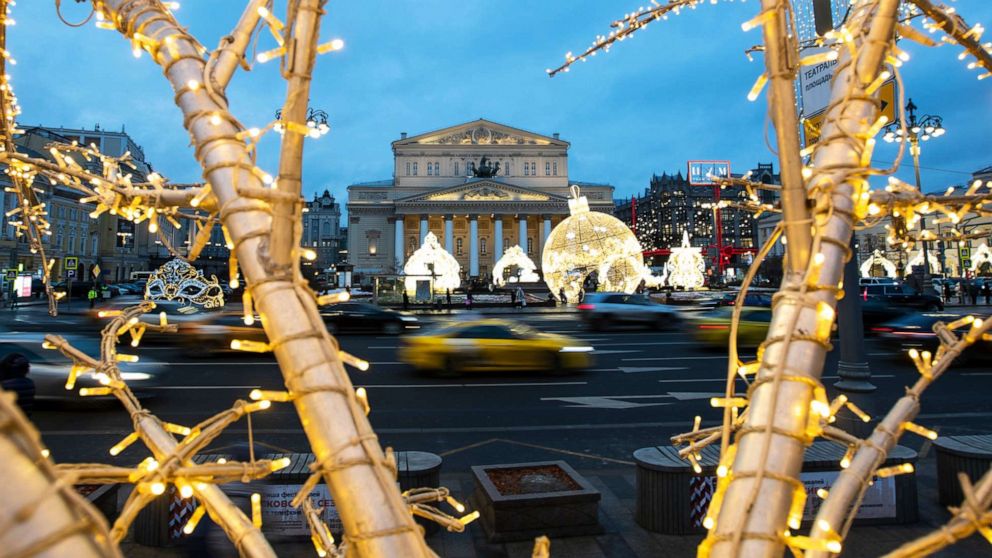 MOSCOW — In a rare sight in the pandemic era, the grandiose auditorium of the Bolshoi in Moscow started filling up with people arriving to see the legendary “Nutcracker” ballet on a December night.

The number of seats has been capped to 25%, and neither staff nor spectator can enter the building without a body temperature check and a face mask. But the enthusiasm of dancers and ballet lovers is unbridled.

“We are happy people because we have the opportunity to work today,” Makhar Vaziev, Bolshoi Ballet director, told ABC News. He said that the anxiety and the feeling of danger persist, but would be worse if his dancers had to stay home.

The performing arts industry has been hard-hit by the pandemic, and most theaters worldwide remain closed this season. In-person performances of “The Nutcracker” — the ultimate Christmas blockbuster — were no exception.

To cushion the disaster, U.S. ballet companies had to get creative. One of the country’s biggest companies, the American Ballet Theatre, partnered with a commercial sponsor to film excerpts of “The Nutcracker” for YouTube. Others will stream their past performances, or — if weather conditions permit — perform outdoors like the Miami City Ballet.

At the Bolshoi, however, “The Nutcracker” has been running almost daily, sometimes twice a day, from Dec. 22, with the last shows scheduled for Jan. 7, when Russian Orthodox Christians celebrate Christmas.

But despite being busy, the current season is not going to be a financial success, with ticket sales limited to just 25% as of mid-November. At the time, Russia reported over 20,000 new coronavirus infections every day.

“If the situation requires it, it would be fair to close us down,” Vladimir Urin, Bolshoi Theatre director, told RBK business daily.

For the dancers, fewer spectators at the normally sold-out shows might be unusual, or even “terrible,” as Vaziev put it — but better than staying home.

Alexey Putintsev, who debuted in “The Nutcracker” this Christmas, said nothing can ruin this season. He said he hardly notices how few people are watching.

“Those people in the audience give such an ovation — you could not have dreamt of it! They make up for 100%, 150%, and they cheer!” he said when ABC News spoke to him before a dress rehearsal.

Putintsev and his colleague Elizaveta Kokoreva — who plays Marie, also known as Clara in some Western productions — have bad memories of spring 2020, when even the Bolshoi was shut down. Both say they are happy to get back on stage.

The Bolshoi Theatre had to completely shut down mid-March and re-opened in September. Since then, only one show, Verdi’s opera “Don Carlo,” has been canceled, after a singer was diagnosed with COVID-19.

The theater does not have solid numbers for infections in the troupe. When meeting with Putin in November, Urin said 124 out of 3,000 staff were infected.

Vaziev said the Bolshoi Ballet is capable of going on because they are the biggest company in the world. “We have some interchangeability,” he said.

“Surely the situation is difficult, but if we imagine … that this virus will be with us for the next two to two-and-a-half years, what can we do?” Vaziev said.

Like many, he hopes the vaccination campaign started in Russia in December will help them “move forward with more confidence.”

Tougher rules begin for millions in U.K. as new coronavirus variant spreads around the world