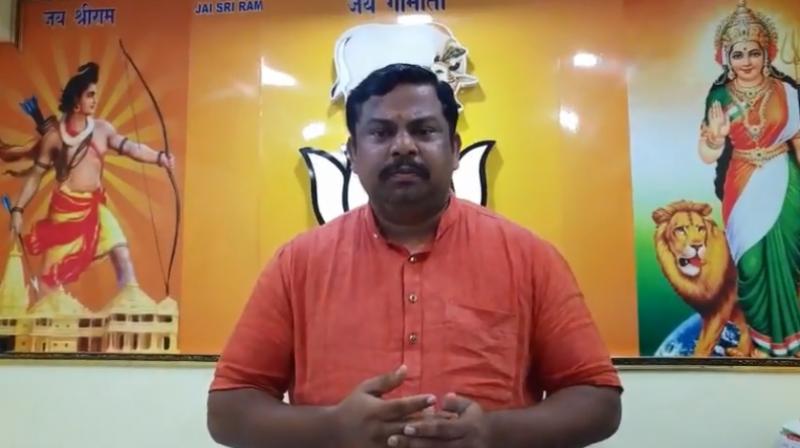 The BJP MLA from Hyderabad alleged that Srisailam temple was under the control of Muslims and all contracts and shops were monopolized by them. He alleged cows in Goshala are being killed to extract their meat.

Denying the charges, Silpa said he was ready for a debate after Sankranti.

Srisailam, one of the Shaktipeeths, and an important Jyothirlintga in India has been in the eye of controversy as the major revenue sources of commerce and business are cornered by Muslims. Raja Singh had alleged that one Razaq, who is a contractor with Srisailam temple and his wife, a Hindu, is employed as a supervisor in the temple. He said Razaq is a close aide of Silpa Chakrapani Reddy while Razaq's brother is a TDP leader. Irrespective of which party is in power, the Razaq brothers are controlling the temple with the help of political parties.

When contacted, Raja Singh told Deccan Chronicle that several cases are pending against Razaq, which include transporting mutton in flower baskets. These flowers are used for puja in the temple. He said the goshala is supervised by Razaq's wife, who is helping her husband. Cows are killed with the connivance of the supervisor and its meat was being consumed, which is prohibited in the temple town.

Rubbishing the allegations, Silpa Reddy said Muslims have been living in the temple town for ages and he became MLA only two years back. He clarified that he had nothing to do with Razaq and Singh’s allegations were "baseless, malicious, mischievous," and only intended to provoke a section of the community and spreading ill-will in the community.

He claimed that he was a staunch Hindu by practice and had built temples with his own money. He challenged Singh to prove his allegations in the presence of Peetadhipathis at Srisailam after Sankranti and he was ready for any eventuality.

The goshala run by the Srisailam Bhramaramba Mallikarjuna Swamy temple has about 1,542 cows including ox. Every month at least one or two cows reportedly die due to diseases, said a temple official.

A dedicated veterinary doctor, along with 44 helpers, is working at the goshala. The official said that the goshala supervisor was shifted after allegations of killing of cows surfaced.

The official said Endowments Act clearly states that people of other religions are not allowed to live in temple towns. But the Muslims staying in Srisailam approached courts and the issue is now pending before the Supreme Court.

“Once a decision is out, we will proceed accordingly”, he said.

Atmakur DSP, Y. Sruthi said no cases have been filed against Razaq at Srisailam.

5 cartoons about the end of a very, very bad year

Control of the Senate puts Georgia runoffs in national spotlight