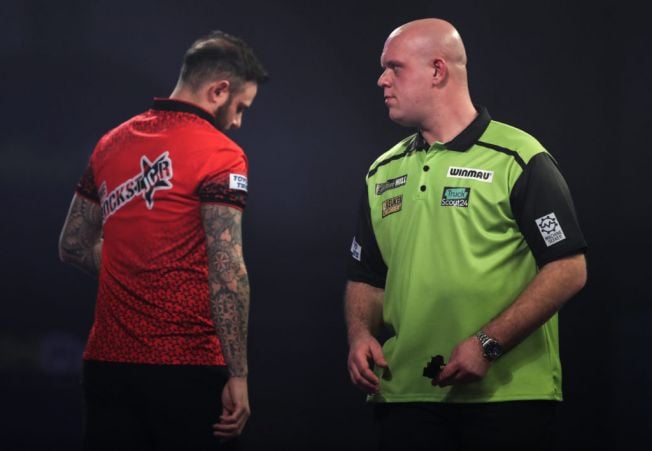 Top seed Michael Van Gerwen survived two match darts against him to sink Joe Cullen in a final leg decider and reach the quarter-finals of the PDC World Championship.

The three-time champion’s stunning comeback win capped a dramatic day of action at Alexandra Palace after James Wade earlier recorded the first nine-darter at the tournament for five years.

Wade’s heroics could not stop him sinking to a 4-2 defeat against Stephen Bunting and for long periods it looked like favourite Van Gerwen was also heading out.

Cullen led 3-1 in sets and after Van Gerwen reduced the deficit, the Bradford 31-year-old missed his first match dart at bull in the deciding leg of the sixth set.

The underdog missed his second shot for the match, also at bull, in the fourth leg of the deciding set, and Van Gerwen seized his opportunity to storm back and seal victory.

Van Gerwen told Sky Sports: “He was playing phenomenal and he put me under pressure loads of times, and I had to do everything in my power to beat him.

“I came back after the 3-1 break still with a lot of confidence, and I’m really glad I managed to do it. I had to keep up with him and it wasn’t easy.”

The first nine-darter at Ally Pally for five years!

Wade’s historic nine-darter came at the start of the fifth set but was met with an understated reaction which underscored an otherwise poor performance from the number seven seed.

Despite dragging himself back from two sets down to level, Wade went on to lose the last two sets and finished with a disappointing average of just 87.94.

Gary Anderson was the last to accomplish the nine-dart feat in January 2016 but Wade’s was the first in the competition’s history to take place in an empty venue.

Bunting admitted the lack of fans probably played into his hands, saying: “That’s probably the sort of situation when you’re happy the fans aren’t here because they’d have been buzzing all the way through that match.

“He hit the nine-darter and it was probably a bit of a blur for him and for me. Next thing I gave him a fist pump then it was on to the next leg.

“If the crowd had been here it would have been noise galore for the rest of the match.”

Krzysztof Ratajski was the first player through to the quarter-finals after a dramatic deciding-leg victory over Germany’s Gabriel Clemens.

eighth seed Dave Chisnall dropped the first six legs of his match against Dutchman Danny Noppert but recovered to win 4-2 and book his place in the last 16.

2020 wasn’t all bad: sporting tales that lifted the lockdown gloom