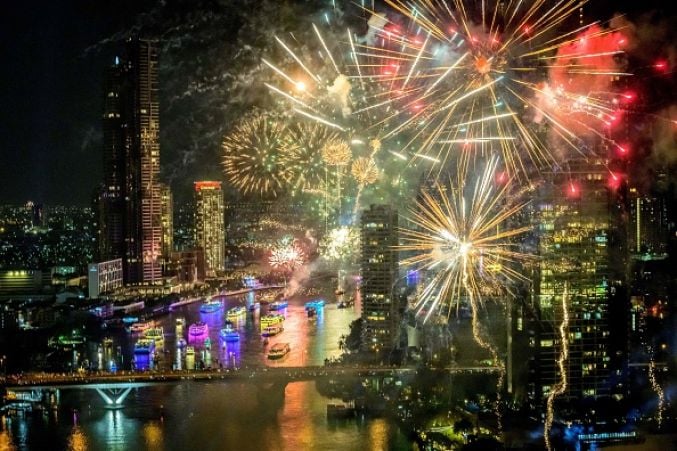 New Year’s Eve is being celebrated like no other in most of the world, with muted celebrations as a result of coronavirus pandemic restrictions.

In Ireland, celebrations are expected to be more subdued as people were urged not to host gatherings or parties given the rapid rise in Covid-19 infection rates, which have necessitated a third lockdown.

In his message, President Michael D Higgins said it was important to remember those who were lost during what was a “tough year” and those who could not grieve in the traditional way because of public health restrictions.

“As we emerge from the year of Covid, it is appropriate that we remember all those who have departed from us during the year, and those they have left behind and who did not have the opportunity of grieving for them in the way that is so traditional, and so central to Irish life,” said President Higgins.

In his new year’s message, Bishop of Limerick Brendan Leahy urged people to carry the learnings from 2020 into the next year, in particular to prioritise the most vulnerable in society. “May we never forget this experience of the year when vulnerability was neither ignored nor superficially dealt with,” he said.

“We saw need — we rushed to respond; we recognised mistakes — we remedied them; we recognised the cost — we were prepared to make sacrifices. This has to be a template for us going forward.”

“Collective effort has been a hallmark of our year. It shows us that when our generous social capital, altruistic political will and shared resources come together we can tackle issues and make a difference.”

New Year’s experiences in Asia and the South Pacific varied greatly depending on the country.

Some major cities cancelled or scaled-back their traditional celebrations, while a handful of places without active outbreaks carried on like any other year.

Australia was among the first nations to ring in 2021 because of its proximity to the international date line.

In past years one million people crowded Sydney’s harbour to watch fireworks. Instead, most watched on television as authorities urged residents to stay home and the country’s most populous states, New South Wales and Victoria, battled new Covid-19 outbreaks.

Locations on the harbour were fenced off, popular parks closed and famous night spots eerily deserted.

A 9pm fireworks display was scrapped but a seven-minute pyrotechnics show at midnight brought momentary cheer as fireworks spectacularly lit up the iconic Harbour Bridge and its surroundings.

Melbourne mayor Sally Capp said: “We did that because we know that it attracts up to 450,000 people into the city for one moment at midnight to enjoy a spectacular display and music. We are not doing that this year.”

In South Korea, Seoul’s city government cancelled its annual New Year’s Eve bell-ringing ceremony in the Jongno neighbourhood for the first time since the event was first held in 1953, months after the end of the Korean War.

The ceremony normally draws an estimated 100,000 people and is broadcast live.

Authorities in coastal areas of eastern South Korea closed beaches and other spots where hundreds of thousands of people typically gather on New Year’s Day to watch the sunrise.

Cities and countries that have managed to control the coronavirus got to celebrate.

New Zealand, which is two hours ahead of Sydney, and several of its South Pacific island neighbours that also have no active Covid-19 cases held their usual New Year’s celebrations.

A flag-raising ceremony in front of the Presidential Office Building on New Year’s morning was planned. The island has registered only seven deaths and 700 confirmed cases.

In Chinese societies, the Lunar New Year, which in 2021 will fall in February, generally takes precedence over the January 1 solar New Year.

Beijing scheduled a countdown ceremony with just a few invited guests, while other planned events were cancelled.

Much of Japan welcomed 2021 quietly at home, alarmed after Tokyo reported a record daily number of confirmed coronavirus cases. The capital reported about 1,300 on Thursday, topping 1,000 for the first time.

Many people skipped what is customarily a chance to return to ancestral homes for the holidays, hoping to lessen health risks for extended families.

Emperor Naruhito is delivering a video message for the new year, instead of waving to cheering crowds from a balcony outside the palace.

Millions of Indians planned to usher in the new year with subdued celebrations at home because of night curfews, a ban on beach parties and restrictions on movement in major cities and towns after the new, more contagious variant of the coronavirus reached the country.

Drones were keeping watch on people’s movements in Mumbai, India’s financial and entertainment capital. Large gatherings were banned, but there were no restrictions on visiting friends, relatives and public places in groups of not more than four people, police said.

Despite a surge in infections, the Gulf hub of Dubai pressed ahead with its mass New Year’s Eve celebrations, including the annual fireworks show around the Burj Khalifa, the world’s tallest tower.

In many European countries authorities warned they were ready to clamp down on revellers who breach public health rules.

In the Czech capital of Prague, a popular New Year’s destination for people from across the continent, police prepared to enforce a night-time curfew starting at 9pm.

Organisers of the annual New Year’s Eve show at Berlin’s Brandenburg Gate that regularly draws hundreds of thousands of spectators are this year putting on a virtual event for people to watch at home.

Public gatherings and fireworks are banned in much of the Germany capital.

Italy’s interior minister has ordered 70,000 law enforcement officers to be on patrol for New Year’s Eve and said this year’s celebrations will be “more sober” than usual.

The British government ran ads imploring the public to “see in the New Year safely at home.” Most of England’s population is under lockdown measures in an attempt to slow the spread of the new, easily transmissible coronavirus variant.

Look at Wuhan a year after 1st acknowledgment of COVID-19