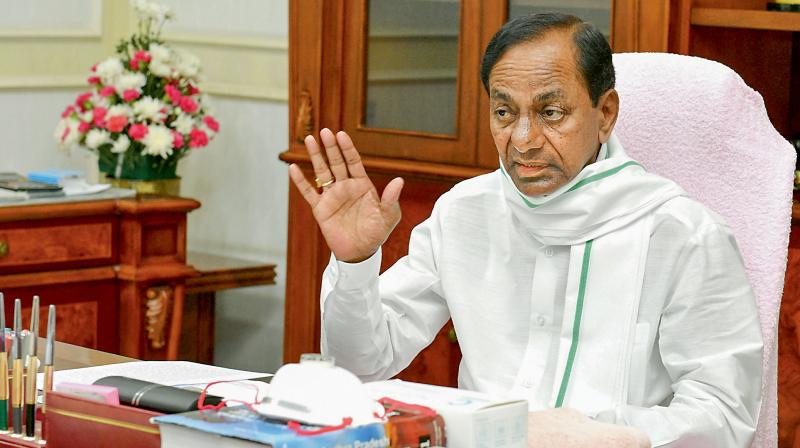 Hyderabad: Chief Minister K. Chandrashekar Rao announced on Sunday that the Rythu Bandhu financial assistance to farmers for the Rabi season will be deposited in their accounts from Monday. He said `7,515 crore will be deposited into the accounts of 61.49 lakh farmers covering an area of 1.52 crore acres at a rate of `5,000 per acre.

The CM held a review of the scheme at Pragathi Bhavan. He held extensive discussions on purchase of various crops, a regulated farming policy, sale and purchase of agriculture produces in the markets, responsibilities of the Rythu Bandhu Samitis, utilisation of Rythu Vedikas, keeping the required seed and fertilisers in adequate quantity to be distributed on time, transfer of the required tech-skills to farmers and related matters.

The officers suggested that there was no need for regulated farming and there was no requirement for the government to suggest the crop pattern from the next year. The government should forthwith stop issuing guidelines on the crops to be cultivated. Farmers should decide by themselves what crops they should cultivate. They should sell their produce wherever it gets a higher price, the meeting said.

The officials said that ever since Telangana state was formed, the government had incurred heavy losses in the purchase of various crops. Till date, it has incurred a loss of `7,500 crore in purchases of paddy, sorghum, maize, red gram, bengal gram and sunflower.

The losses were caused due to the sale of the produce at lower rates in the market after purchase by the government at higher prices under the minimum support price (MSP) scheme, officials averred.

This year, the state government purchased farm produce directly from the farmers keeping in view the Coronavirus pandemic situation, through procurement centres in villages. Direct purchase by the state from farmers is not possible the next year too, officials said.

The officers suggested that sale and purchase of farm produce be streamlined via the agriculture markets with close coordination of Rythu Bandhu Samitis, marketing committees and agriculture extension officers.

It was decided at the meeting that the agriculture department oversee all the farm-related activities including monitoring of the Rythu Bhima scheme, supply of seeds, fertilizers etc, and providing latest technology to farmers and helping them with new seeds.

The officers were instructed by the CM that they ensure meetings are held with farmers regularly at the Rythu Vedikas and they should discuss and decide as to which crops farmers should cultivate in various regions based on the emerging market conditions.