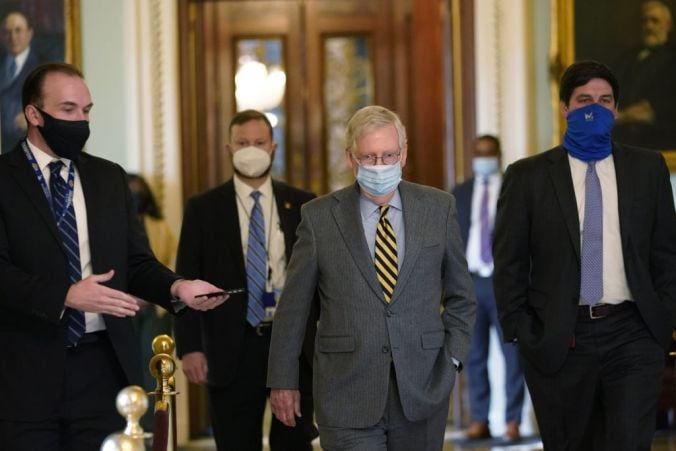 The moves came as an emphatic double rebuke of the defeated president at the end of a chaotic Congress.

Democrats tried a final time to push forward a House-passed bill that would boost the 600 dollar (£438) direct aid payments just approved by Congress to 2,000 dollars as Mr Trump demanded for millions of Americans. Republicans blocked a vote, arguing in favour of a more targeted approach.

The rejection of Mr Trump’s top priorities, along with the first veto override of his presidency, offered an unusual willingness by the president’s party to confront Mr Trump, now in his final days in the White House after losing the November election to President-elect Joe Biden.

Mr Trump lashed out at GOP leadership on Twitter. “Pathetic!!!” he wrote.

Our Republican Senate just missed the opportunity to get rid of Section 230, which gives unlimited power to Big Tech companies. Pathetic!!! Now they want to give people ravaged by the China Virus $600, rather than the $2000 which they so desperately need. Not fair, or smart!

But Mr Trump appeared more focused on his next battle to overturn the results of the election during next week’s session tallying the Electoral College votes.

Congress is ending a dizzying session, a two-year political firestorm that started with the longest federal government shutdown in US history, was riven by impeachment and a pandemic, and now closes with the GOP’s rare rebuke of the president.

Democrats vowed to swiftly revive the plan for 2,000 dollar cheques after the new Congress is sworn in Sunday.

“President-elect Joe Biden has made clear that the pandemic relief bill that Congress passed is simply a down payment on the work that needs to continue,” said Democratic representative Hakeem Jeffries, the chair of the House Democratic caucus. “We’re going to continue to fight for a $2,000 direct payment cheque.”

Tensions ran high as senators sniped over slogging through the holiday season at the Capitol.

Senate Democratic leader Chuck Schumer tried, as he has all week, to push the proposal for a vote, saying “the only thing standing in the way” was Republican senate majority leader Mitch McConnell and other Republican senators.

The second-ranking Republican, Senator John Thune of South Dakota, rose to object, saying the proposal was “not an effective way” to meet the needs of Americans.

That drew an angry tweet from Mr Trump, who said the state’s Republican governor Kristi Noem should pose a primary challenge to Mr Thune, who faces a re-election battle.

But presidential tweets that once sparked fear in Republicans may be losing their punch.

Republican senator Lisa Murkowski told reporters she found it “very dispiriting at this time, New Year’s Day, that the president would be working to pit Republicans against Republicans”.

Mr Trump’s last-minute demands threw Congress into a tumultuous year-end session that deepened the divide within the party between the GOP’s new wing of Trump-styled populists wary of defying the president and what had been mainstay conservative views.

Senator Josh Hawley, who has pledged to lead Mr Trump’s challenge to overturn the election during next week’s session, was among those senators who also supported Mr Trump’s push for Covid-19 aid.

Mr Hawley found himself in common cause with Senator Bernie Sanders, the independent from Vermont, who argued on Friday for a vote.

He dismissed the proposal, as passed by the House, as “socialism for rich people” who did not need the federal help.

Mr McConnell proposed his own bill, loaded up with Mr Trump’s other priorities to rein in big tech companies and investigate the 2020 presidential election. But it was not a serious effort, and he did not push it forward for a vote.

The refusal to act on the cheques, along with the veto of the defence bill, could very well be among Mr McConnell’s final acts as majority leader as two GOP senators in Georgia are in the fights of their political lives in run-off elections next week that will determine which party controls the Senate.

The 81-13 vote in the Senate to pass the defence bill followed an earlier 322-87 override vote in the House of Representatives of the widely popular defence measure.

The bill provides a 3% pay rise for US troops and guides defence policy, cementing decisions about troop levels, new weapons systems and military readiness, personnel policy and other military goals.

Mr Trump rejected the defence measure last week, saying it failed to limit social media companies he claimed were biased against him during his failed re-election campaign.

He also opposed language that allows for the renaming of military bases that honour Confederate leaders.

World rings in 2021 with muted celebrations amid Covid-19 restrictions

The U.K.-E.U. trade deal might mean the British can stop talking about Brexit