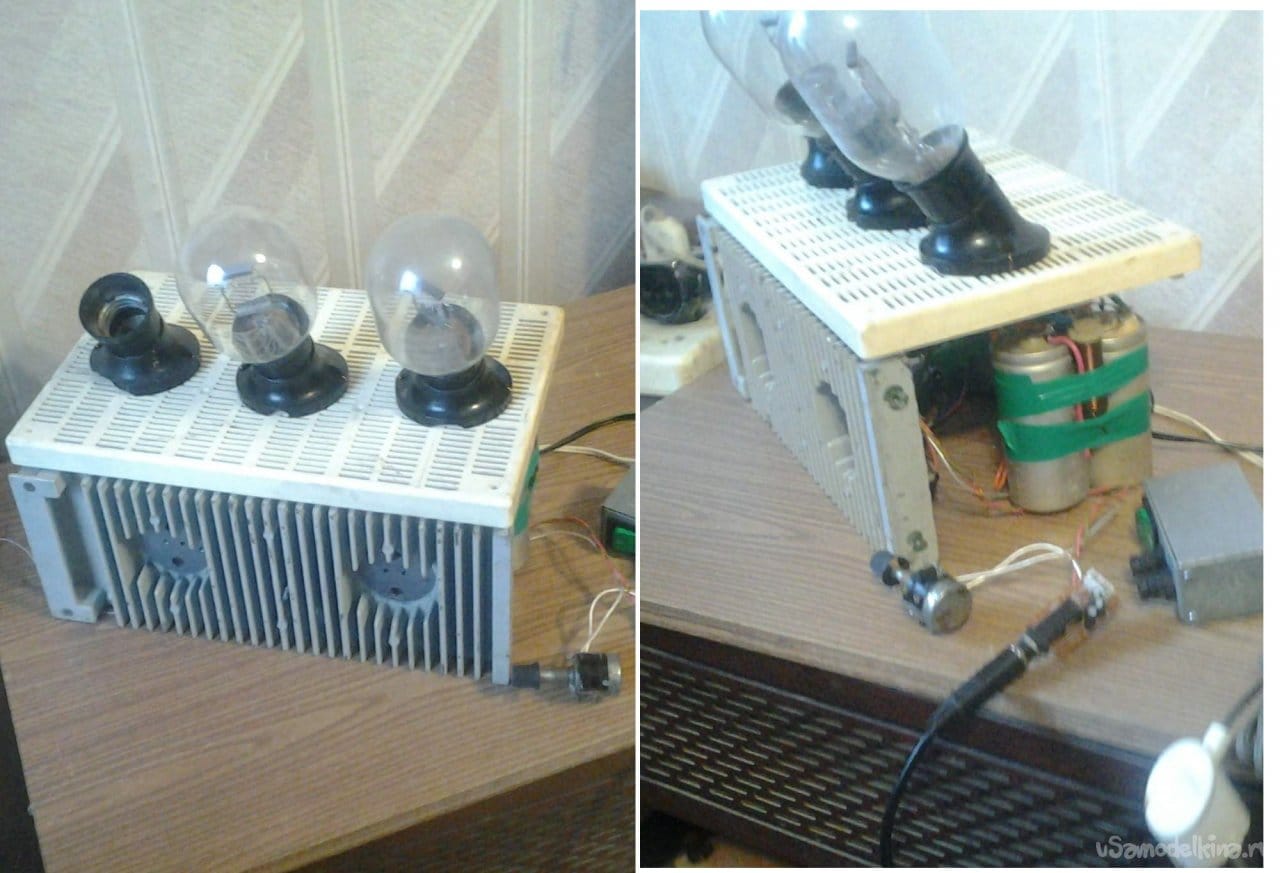 Recently, trying to find a description of a device produced by one of our radio engineers (about him at the end), I came across an interesting amplifier circuit, the analogue of which we tried to make. Scheme from an English-language site, normal audiophiles live there.
Here are screenshots of their website, articles about the amplifier and photos of their work.

Name articles: “ L'Amp: A Simple SIT Amp: Part 1 “, translated from the Google -translator – “ L'Amp: a simple amplifier for sitting: Part 1 “.
Article by Michael Rothacher, United States … There will be no translation, there will be a summary, for those who wish there is a link to the original. The author describes how he came across the description and parameters of the rare 2SK82 transistor.
He was eager to make an amplifier based on it, super simple and super high quality. Well, you can understand it. After a long preamble, he began his job description by saying “ I built the device shown in Figure 1. ©” and took the characteristics of the transistor. We will skip boring information for specialists, here the diagram and characteristics are without details.
Further, the author simulates the working circuit, while using incandescent lamps as the drain load of the transistor in a mode close to the barrettor mode, i.e. generator, tries different modes and stops at this: “The 2SK82 is rated at 95W and ideally we might want to see a 4: 1 safety factor to ensure our parts last long … increase the power to 45W or so … for each Vgs value, draw a point where the power dissipation is 45 W, and connect them with a curve, as in the picture … © “And so on. Results on graphs.

Theoretical research he ends with the phrase:“ However, I would like to point out that looking for a golden spot on paper is only really useful as a rough starting point. In real life … they rarely look alike, and if you ever … you already know that this is true. “
Further, the author of the article advises:” retreat to the nearest mountain peak, meditate on them (works by his favorite author) until you reach enlightenment, then return to your desk and use real parts with real electricity ©. ” Here is a diagram of the first breadboard of his amplifier.
For some reason the author called it“ my test setup “give up science into the wall and see what sticks ”. © “. The circuit changes slightly during operation, see the following figure. “… The input impedance is equal to the value of R1, and the output impedance is approximately equal to the total resistance of the bulbs. I used two 300 W bulbs ( American household 120 V 60 Hz ), whose parallel resistance is in the range of 11-13 Ohm … © “
Then he writes about nonlinear distortions and their measurement: I am using (INI) HP8903, which is easy to get hold of and has rates below 0.003%. Here are some of my findings: © “

And a few extracts from the following text: “I tried one, two and three bulbs and the results weren't very interesting … this area could be used with a different load … The gain of this circuit is the effective load divided by the inverse slope of the FET. Returning to our characteristic curve, we see that the slope in the operating area is about 0.4 A per input voltage, or 0.4 Siemens. The effective load is the resistance of our light bulb connected in parallel with our 8 ohm speaker, or about 5 ohms. It's not a lot of gain, but the distortion performance looks pretty good … (Circuit on) Figure 11 does not require any adjustment or separate bias source and will get you pretty close. © ” So, the final scheme.

I will wedge into the text of the article and give a complete diagram of the same amplifier, with a power supply, from a later publication. The only thing is that instead of lamps, an inductance coil is used, another experiment.
Next. Based on that scheme “I put together a couple of prototypes from plywood. Then I lugged the prototypes, three regulated power supplies, a bunch of clamps, and my laptop upstairs for two flights to my listening room to see if I liked the music. © “. These are the prototypes.
And this is the final design with its own power supply and signal level indicator. 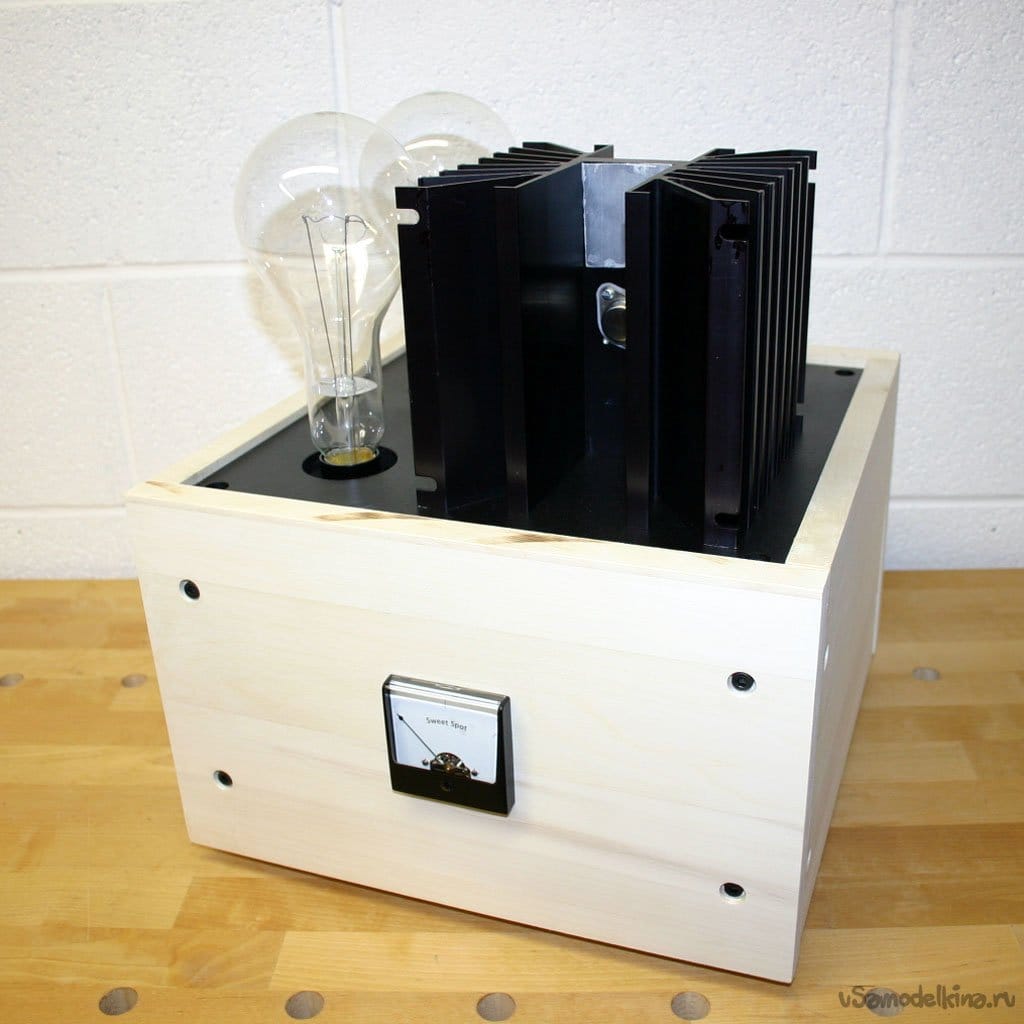 Next “ power supply circuit for one channel, and there is nothing unusual here. I have used Antek 400VA transformers which have two 40V secondary windings that are connected in parallel. Anteks also has two 15V secondary circuits, which is handy for adding a small regulated power supply … ©. ” 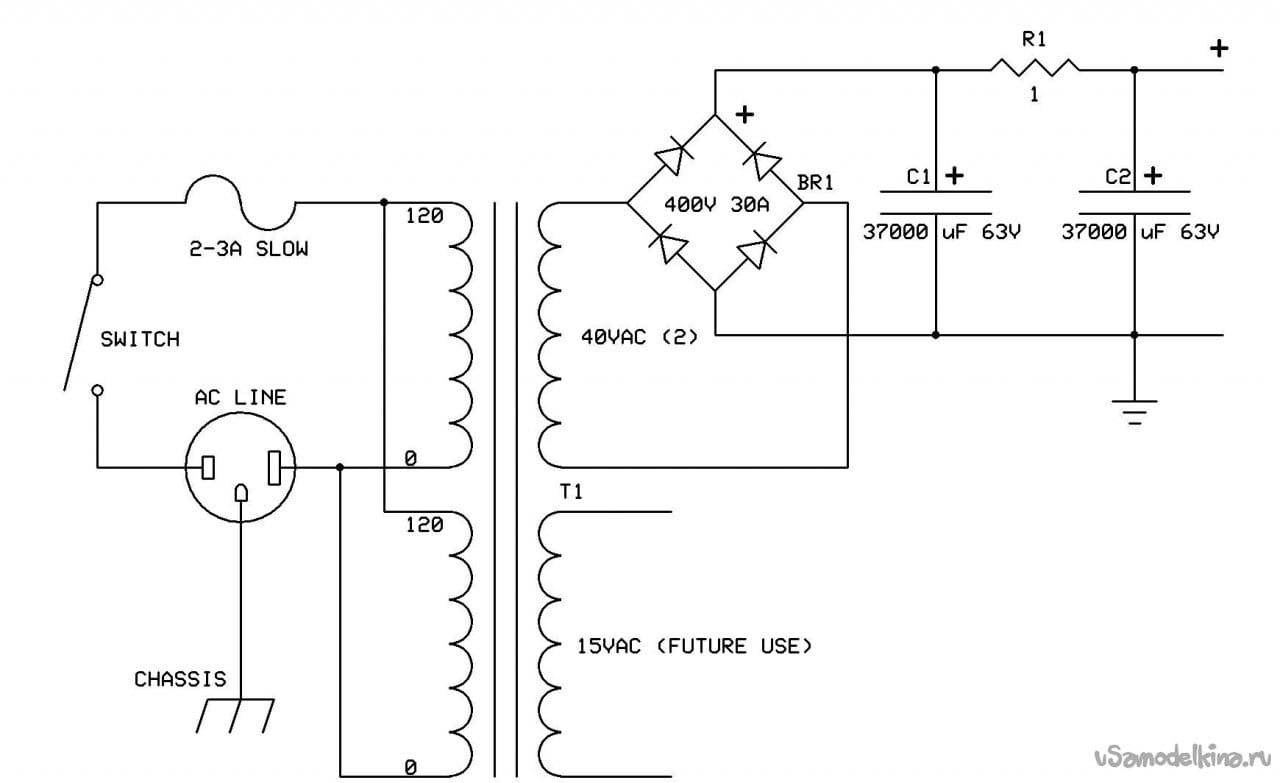 Everything is clear here. But the signal level indicators are different here and in America. This is their option.
Further, the author of the article writes:“ This small amplifier measures good characteristics, especially when you consider it in your class … © ”and gives the measurement results. I agree, of course, class A, and even on a field worker with a current generator in the load – this is not bad for us either.
Last from the author of the article:” I agree with the opinion that this is an entertainment business, and I believe that your audio equipment should please you. If you like to wear really uncomfortable shoes because they look good, I respect that, but I love tennis shoes more. © »If our way, without tolerance – I do this way because I so like it …
… And now let's return to our native land. A small group of fans of good sound (audiophiles, “golden ears”, etc., then – guys ), despite the complete absence of this super-deficient transistor, using the carrot and stick method, they forced me to assemble “something like that” from scrap and improvised means. Let's start with the diagram, and we will charge the hull and locksmith work to the customer …
Of the transistors that require a blocking negative voltage to control the flowing current, like the 2SK82, we only have a trifle such as KP303, etc. Powerful transistors like IRF, etc. a positive gate voltage is required, so the circuit structure is different. In the original circuit, the resistor R3 serves to create a blocking voltage at the gate, in our version it is not needed, therefore its analogue R5 can be significantly reduced to increase Ku . The positive bias is generated by the 7812 regulator and trimmer.
As an example, below is a fragment of another hybrid amplifier. The +12 V supply voltage is stabilized here.
The class A mode used in our amplifier is characterized by high heat generation on the active element, therefore we do not save on the transistor and put IRFP064N with the following parameters:
– maximum allowable voltage between drain and source – 55 V;
– unlocking voltage between gate and source (VGS) – ± 20 V;
– maximum constant drain current at a temperature of +25 OC (ID) – 110 A;
– maximum constant drain current at a temperature of +100 OS (ID) – 80 A;
– maximum power dissipation (PD) – 200 W;
– operating temperature range (TJ) from – 55 to +175 ° C.
The weak point here is the maximum allowable voltage between the drain and the source, only 55 V, so we will limit the supply voltage to 45 … 50 V. We draw the complete circuit.
And we proceed to the “gland”. We start with the power supply unit, from the bridge. We use fairly high-frequency diodes 2D213B with parameters 100 V, 10 A, 100 kHz.
Transient board, mica for insulation from the radiator, KPT-8 paste – nothing special. Work has started. 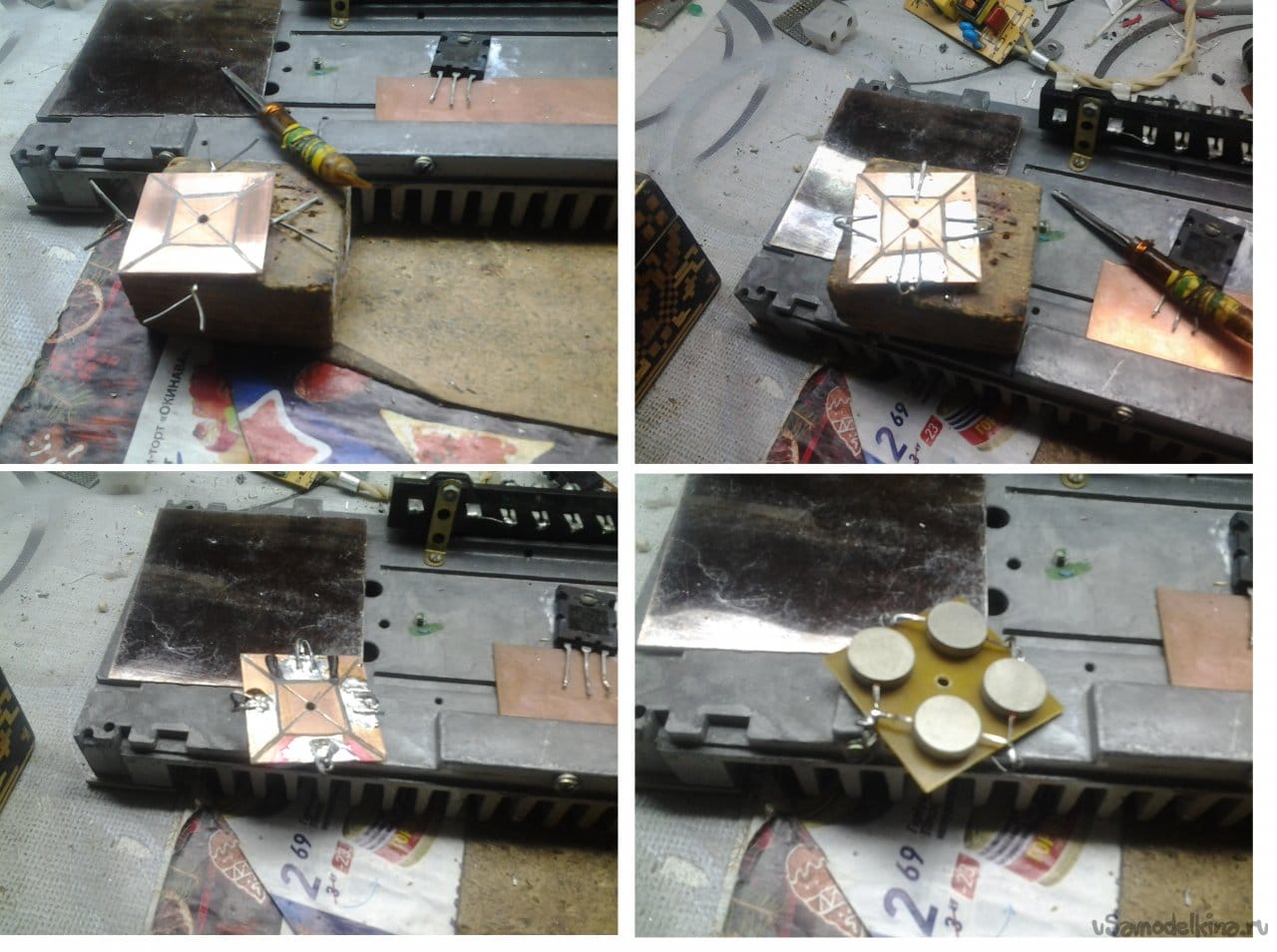 Between those transformers arrived, toroidal. Not from Uncle Liao, from old Soviet stocks. A network filter was also attached to the hairpin shared with them. 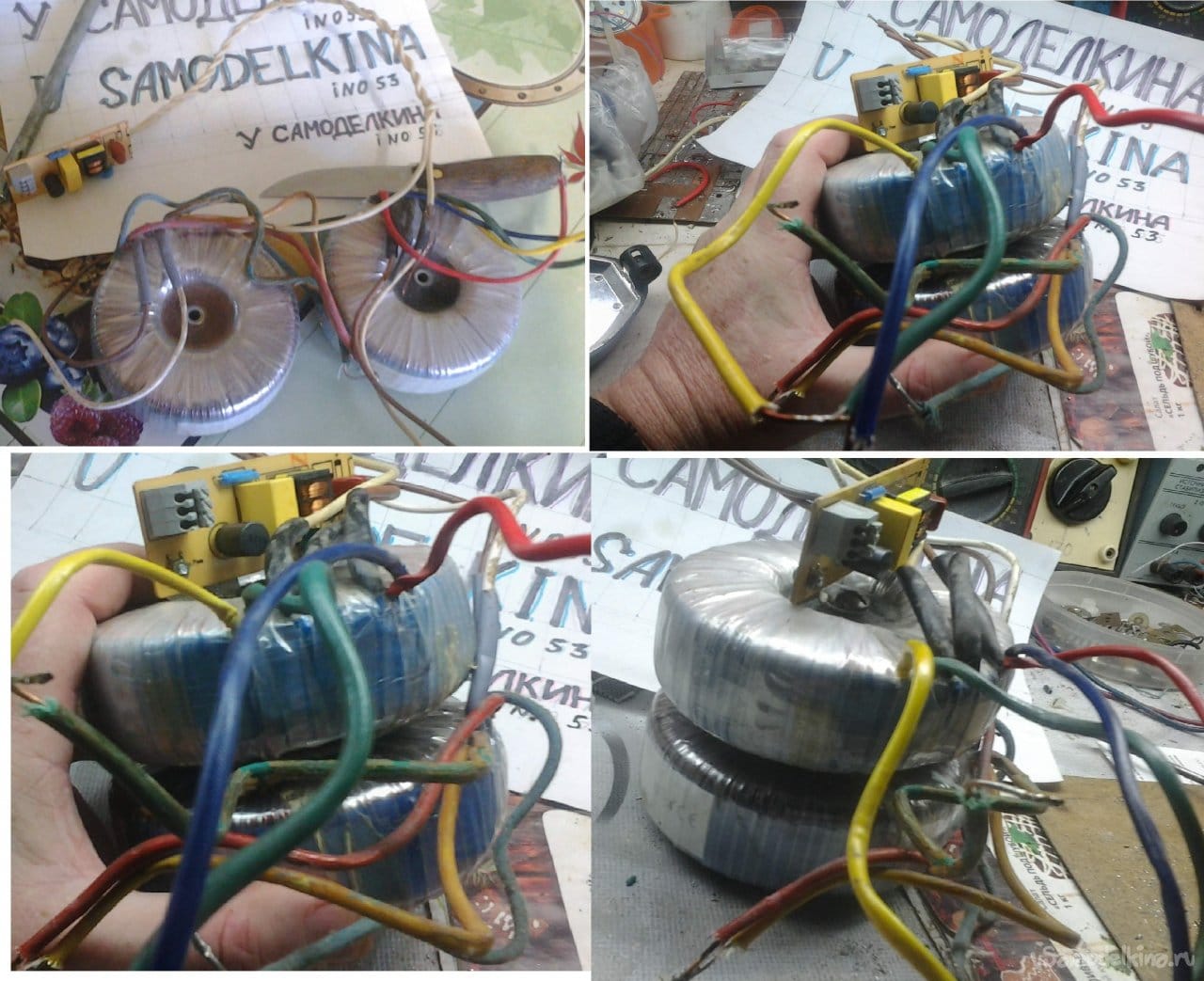 We put capacitors on the bridge. Transistor and thermistor through mica, stabilizer 7812 and thermal fuse right on the heatsink. 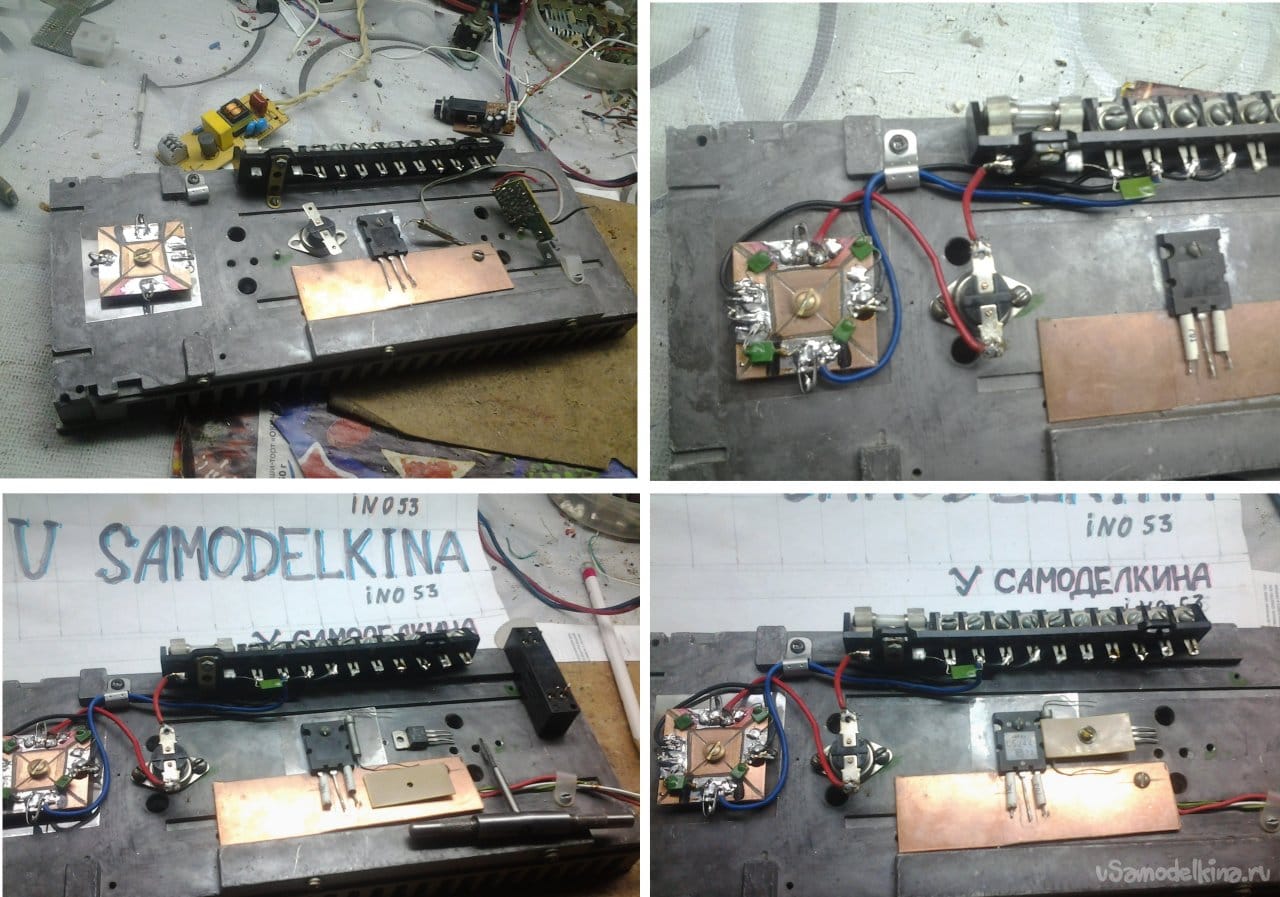 Somehow all components were gradually installed. 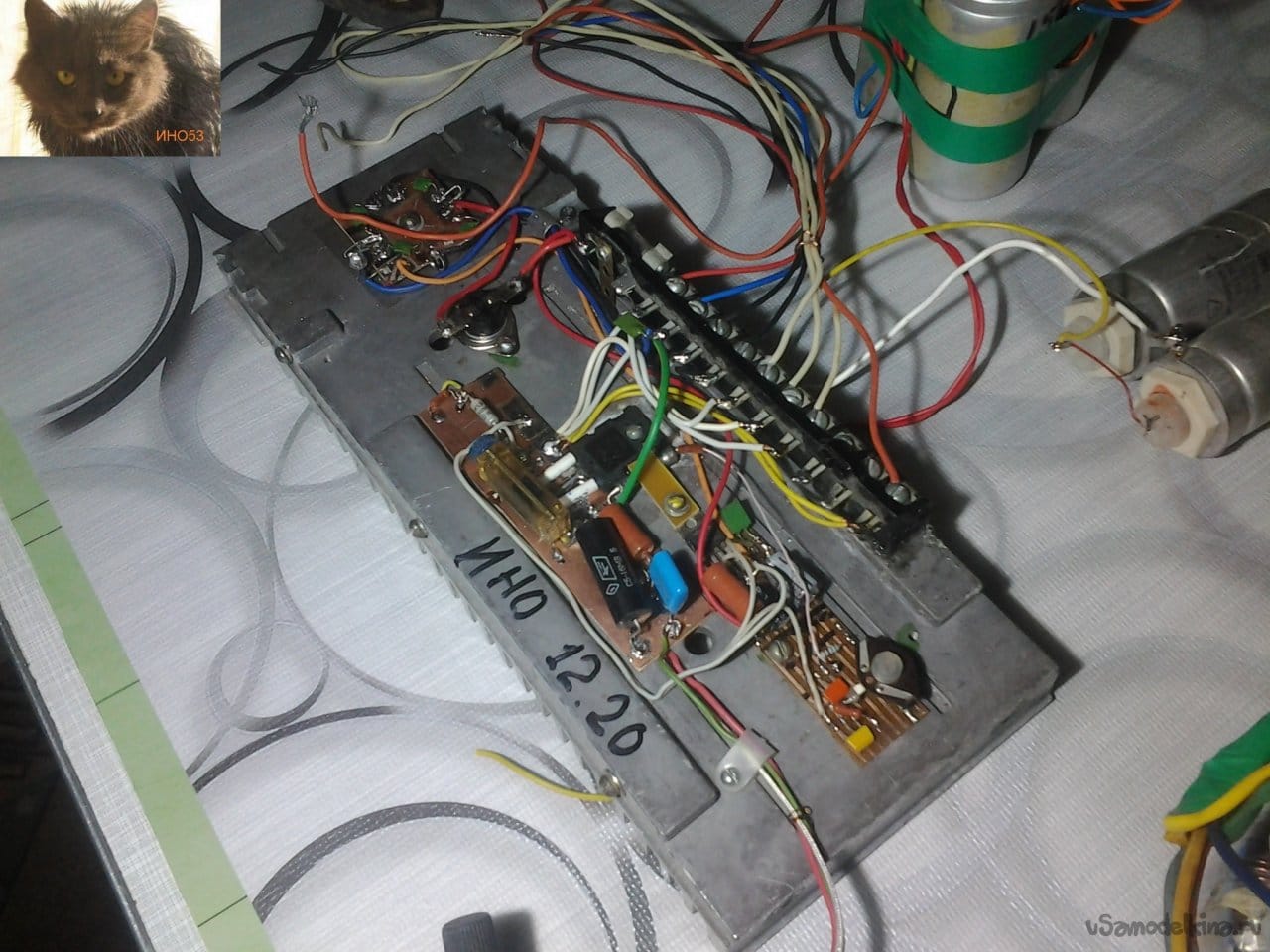 And this is what we piled up. All external connections through the terminal strip, except for the input signal.

This the amplifier itself. Let's put together everything else.
1 – amplifier;
2 – transformers with a line filter;
3 – supply capacitors with an inductive filter;
4 – power cord, switch, fuses, filter;
5 – output capacitors;
6 – horseshoe;
7 – sockets for load lamps;
8 – input signal regulator;
9 – input socket with a preamplifier.
A little more about each element.
Circuit board for +12 V and thermal stabilization.

The +12 V stabilizer has no special features. The work of the thermal stabilization board is as follows: when it warms up to a threshold determined by the trimmer, the opening VT2 transistor shunts C9 and reduces the bias voltage of the field controller, the current through it and, accordingly, the heat release decreases.

Toroidal transformers, power not specified, 2 × 14 V with taps, 6 A. A little inconvenient, not all windings will be used, one transformer will be underloaded.
Power capacitors – 3 pcs. 10000 μF × 63 V, inductance – from the filter from the car radio. Transient capacitors – 2 pcs. 4700 μF × 50 V. Socket for jack 6,3 mm. Resistor SP-3-30S, double, one section is used, loudness will be set (or not) after testing. E27 cartridges, carbolite.
Next – final assembly and running. 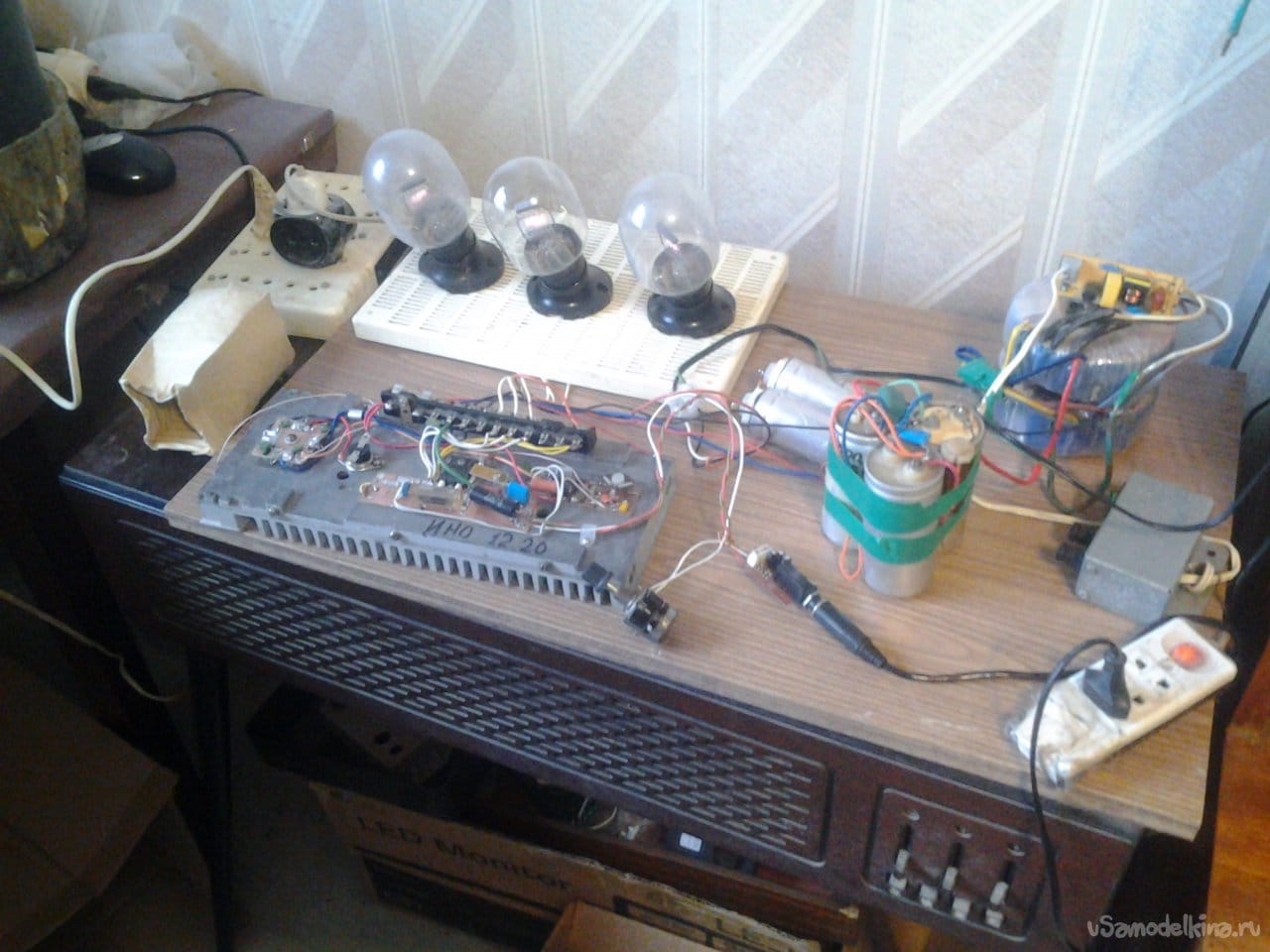 We are testing with different lamps on the dummy load .

Connecting to real load.
Of course, for household appliances with their interconnect signal levels of the order of 250 mV, this circuit is “dull”, but a signal of a standard level of 0.775 V, and even more of a professional 1.55 V, should be enough. It is also not a problem to add a pre-amplifier, especially since it already exists here, mounted on the input jack. But we bypassed it, tk. This amplifier is designed to work with tube pre-amplifiers, which have a sufficiently large output signal.

And finally. I had to deal with different amplifiers, not professionally, but quite a lot. This one did not cause any special emotions when listening, the sound is like sound, on the oscilloscope a sinusoid is like a sinusoid. The output power depends on the lamps used, the S-30 clearly does not swing to the full, 10 … 12 watts by ear, hardly more.

I listened to it until I got tired of it (my wife, not me), and gave it to the guys … (I remind you that hull and locksmith work is behind them.) Somewhere in their huge basement, they worship “ a new deity “, connecting vinyl and various acoustics to it, from simple 4A-32 to fancy JBL. It looks like there will be an order for a series. Approximate layout in the future building. The cartridges will be straight.
… A week has passed, a series of holidays has begun, promised by the guys there are no pictures of the product in the case yet. When they appear, I will add. And yet, a little humor, how it all started. From the article, which is called like this: “ A tube super-mega-stereo amplifier, assembled according to the Kolya Teslo circuit, is capable of pumping not only the S400, but also the public … !!! ©” on the Onliner website. by, https://baraholka.onliner.by/viewtopic.php?t=1521561&start=0.

We laughed with the guys, and then in the comments there was a link to the Diyaudio.com site mentioned at the beginning of the article and the “hybrid” amplifier described there …
https://www.diyaudio.com/forums/diyaudio-com-articles/200460-amp-simple-sit- amp-1-a .html
Now that's it, comment!