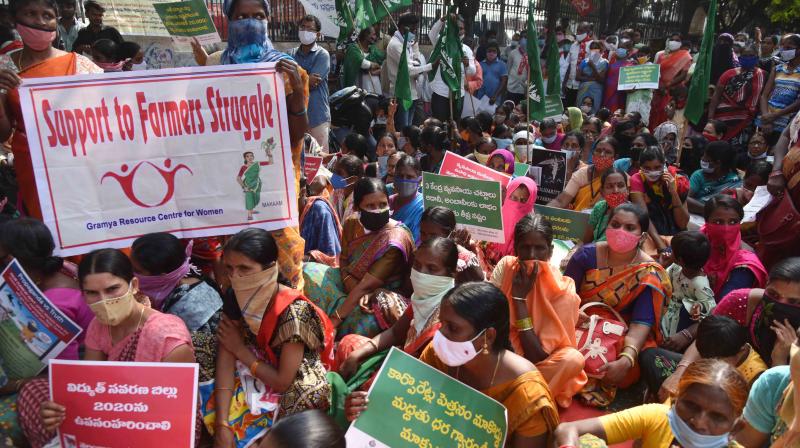 Many social organisations came in support of farmers for their ‘Chalo Hyderabad – Farmers Maha Dharna’ at Dharna Chowk here on Wednesday.

Those participating in the protests against the three farm laws, included transgenders, domestic workers, and women’s organisations. Thousands of farmers from all over the state voiced their anger against the laws, which they alleged was ‘anti-farmer’ and blamed the state government for its U-turn on the issue of procurement of agricultural produce.

One of the protestors, Saraswathi Kavula, said, “The government is saying farmers will enjoy the freedom to sell anywhere when the fact farmers always had the liberty to sell anywhere in the country. Now the government claims that there is corruption at the official level and the new laws will eliminate it. I feel that the government, instead of giving powers to corporate houses, should create a mechanism that protects farmers. As things stand, there is no arbitrator and private players are too powerful and they will control farmers.”

She added, “Black marketing will be legalised. Corporate giants already possess huge warehouses, where they can hoard the crop, create a crisis and then sell at exorbitant rates.”

Sajaya, a transgender,  said, “This should be opposed by everyone. This is the time when we all should stand by farmers, who ensure the nation’s food safety.”

She added “The Chief Minister has taken a U-turn, which is in bad taste.”