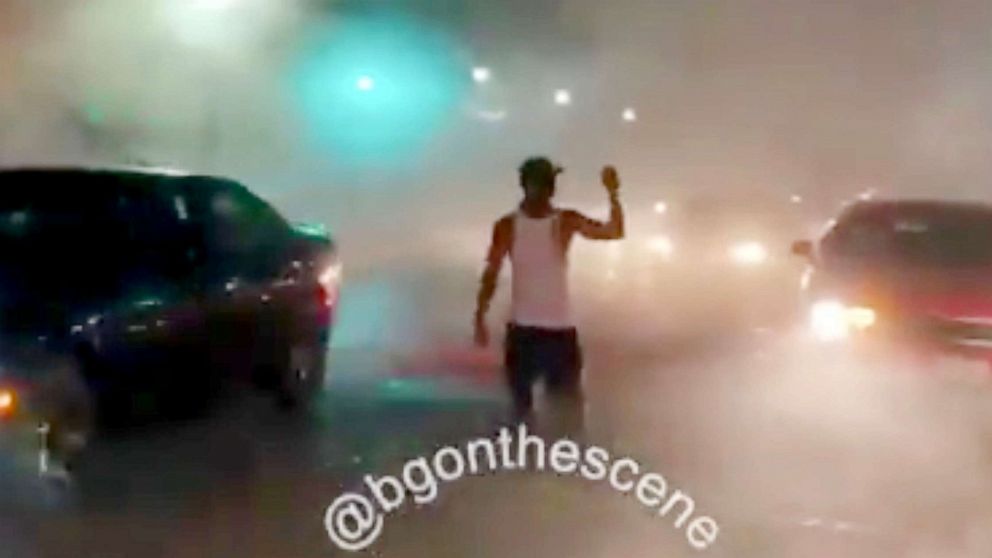 Images of protests and unrest around the country dominated the airwaves this summer.

In a number of cases, they were captured by a roving group of independent videographers, who were able to be in the right place at the right time — time and time again.

ABC News interviewed several videographers who said that the restrictions imposed by the COVID-19 pandemic, coupled with a summer of social unrest, led to them to take to the streets to document a constantly changing and oftentimes dangerous news cycle. While some are motivated by activism or community engagement and others by turning a profit and gaining an online following, they each spoke of their desire to tell new and different stories.

For Brendan Gutenschwager, 23, from Wyandotte, Michigan, 2020 was the year that transformed his part-time hobby of covering rallies and major events into a full-time job of following unrest across the country. Gutenschwager has spent the last 10 months crisscrossing the country, an adventure marked by triumph as well as misfortune.

National and local news networks have long used content from freelance videographers, or “stringers” as they are commonly known, to supplement coverage of major events. However, in 2020, due to protests sparked by the death of George Floyd in May, as well as unrest over measures to contain the coronavirus, the biggest stories of the day often required traveling of hundreds or thousands of miles overnight.

This is where the independent videographers have bene able to make their mark.

“Everything was canceled,” Gutenschwager said, referring to March 2020, when his in-person history lectures moved online and his part-time work as a substitute teacher dried up. He decided to document an anti-lockdown protest in Lansing, Michigan, in mid-April. The chance appearance became a regular occurrence for Gutenschwager, who found himself filming a variety of events throughout the state toward the end of May.

Then on May 25, Floyd was killed during an encounter with police in Minneapolis, starting a chain of events that would take Gutenschwager to Minnesota, Kentucky, Wisconsin and over a dozen other states for the rest of the year, covering protests over police brutality and the killing of Black Americans.

“I was just kind of blown away by the movement itself,” Gutenschwager said. He also found that his regular attendance at these events built up a trust among an online audience, which has grown from around 1,000 Twitter followers in May to nearly 100,000 today.

Oliya Scootercaster, founder of FNTV, an agency that sells freelance video that she films along with five others, said 2020 was full of risks, but it was also great for business. While Scootercaster is normally based full-time in New York City, she started traveling for work this year, going to Chicago, Philadelphia, Washington D.C. and Rochester, New York, to cover protests.

“We were definitely able to build on connections we already had as well as prove more to the clients,” she said. “It gave us a chance to show what we can do.”

Covering protests often means being up close and personal with violence, as seen in Kenosha, Wisconsin. Jacob Blake was seriously injured by police on Aug. 23 when he was shot in the back while his children were in a nearby car. Police defended the action by saying that Blake had a knife, and lawyers for Rusten Sheskey, the officer accused of shooting Blake, told CNN he thought Blake was trying to kidnap a child. Sheskey has not been charged for the shooting.

Kenosha erupted in protests, which turned violent when Kyle Rittenhouse, a teenager from Illinois, opened fire on the second night of unrest. Three people were shot that night, two fatally. Rittenhouse has been charged with felony homicide, felony attempted homicide and possession of a dangerous weapon while under the age of 18. His lawyers say he acted in self-defense and he is set to be arraigned on Jan. 5, according to court records.

Gutenschwager said he genuinely thought he was going to be shot that night, because he was so close to the scene of the second shooting. “I was thinking, I’m already so close that if I’m going to be shot and killed here, there’s nothing I can do to stop it at this point.”

Koerri Elijah, a digital content producer with years of video experience, found himself and his hometown thrust into the national spotlight after the Kenosha shootings. When it comes to videography, Elijah said he believes strongly in the power of independent, local media.

“That’s what people liked from my streams. I’m from here, I don’t have to ask directions, I can give people a history of what’s going on,” the Kenosha resident said.

“I am really just trying to show people that you can build something where you are, and you can utilize the tactics that the media uses to build trust with the community,” he added.

Scootercaster has also had her fair share of being up close with violence while filming, including an incident at a “Back the Blue” protest in a Brooklyn neighborhood in July when three men took her camera and attacked her with it, she said.

“That was shocking, unexpected, because it was my first instance like that,” Scootercaster said, adding that her husband, who often works alongside her, has been attacked while filming at protests in the past. “It has been a learning experience.”

Scootercaster said she is grateful to other videographers for giving her invaluable safety tips, which she has used in her work this year. “They were able to teach me basic things like protect your bag, lean against something and be aware of everything that’s going on, because I was sometimes on my headphones, and that wasn’t the best idea,” she added.

While most videographers insist they cover events from a neutral perspective, almost all those interviewed said it is rarely perceived this way from viewers, who often feel cheated if the depiction of events does not match their experience or perceptions.

Kevin Xavier, who runs an Instagram account sharing protest footage, started documenting protests after being furloughed from his sports media job and deciding he wanted to follow the marches in the New York City area. Today, he operates it with help from 12 videographers and has traveled to six other cities to document protests there. He said he feels obligated to document the good, the bad and the ugly when it comes to protest coverage to provide a genuine perspective on events.

Xavier doesn’t shy away from calling himself an activist, but he said the group remains objective in its coverage.

“We acknowledge that black lives matter, just a statement, not a promotion of any agenda or organization, but beyond that we try to be as objective as possible,” he said.

Scootercaster said people are constantly asking her “what side” she is on, but she says she refuses to take a side. “It’s just so wrong to do that. I am here to document, I’m here to observe, to film the facts, and if I take a side, everything is going to be so skewed,” she said.

“I am not a political person in general, so it actually isn’t hard for me to do. On human level, of course, inside I would tilt toward one side or the other, on a human level, but not political. But it was hard to cover both sides this year, because both sides got more and more suspicious of the media.”

Trying to make a living

Typically, freelance videographers sell their work to local news outlets or to licensing companies, who in turn sell the videos on their behalf.

Xavier said he has sold a handful of videos to news outlets, but he is still getting the business off the ground. He said cheap airfare has made this possible as well as staying with family to cut down on rent costs.

Gutenschwager said that while the work has given him a large online following and a relationship with most major news networks, he’s still starting out. He charges lower rates than other freelancers in an effort to get more exposure. During the summer, he cut costs by sleeping in his car on most trips, until it stalled out and died in the drive-thru of a fast-food outlet near Tulsa, Oklahoma. Now he relies on rentals, cheap hotels and couch-surfing with friends. Despite the exhausting lifestyle, he insists that he has never questioned his decision to be a roving videographer full time.

“I love doing this, and I am fascinated by it all,” he said. “I’ve always been fascinated by history so seeing it unfold in real time is just amazing to me. I really think that people deserve to know what’s going on.”

COVID-19 brought emissions way down in 2020, but what will happen when the pandemic is over?