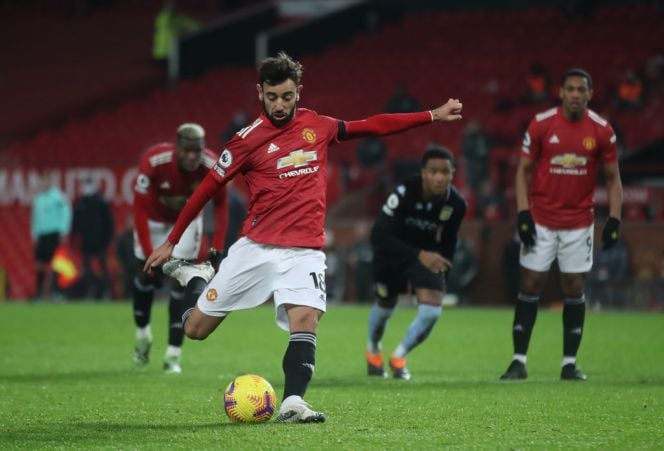 Manchester United moved level on points with Premier League leaders Liverpool as Bruno Fernandes’ penalty got 2021 off to a winning start against Aston Villa.

An impressive run of seven wins in nine top-flight matches saw Ole Gunnar Solskjaer’s side end New Year’s Day in second spot – their highest position at the turn of the year since Alex Ferguson retired as champion in 2012-13.

The United great was in the stands on Friday as the current crop join rivals Liverpool on 33 points, with Fernandes scoring from the spot shortly after Bertrand Traore cancelled out Anthony Martial’s effort to secure a 2-1 win against Villa.

The in-form sides played out an entertaining New Year’s Day encounter at an empty Old Trafford, where fine goalkeeping from David De Gea and Emiliano Martinez prevented the scoreline from being far greater.

United edged the first half and went into the break with a deserved lead as Martial – in for the suspended Edinson Cavani – directed home Aaron Wan-Bissaka’s cross after Tyrone Mings failed to clear.

But Dean Smith’s Villa have been hugely impressive this season and translated early second-half pressure into a goal, with Traore netting after United were caught napping from a quickly-taken free-kick.

The score was not level for long, though, as Fernandes converted from the spot after Douglas Luiz was adjudged to have brought down Paul Pogba in the box.

Play swung from end to end for the remainder of the match and Eric Bailly produced a key block to deny substitute Keinan Davis levelling deep in stoppage time.