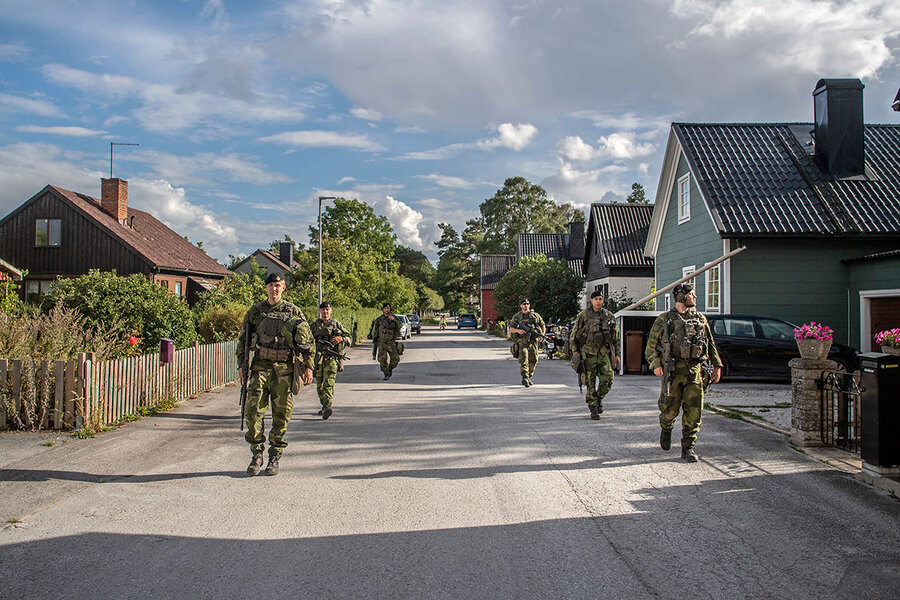 Ever since a brief incursion of Russian warships into Sweden’s territorial waters in September, fending off a potential fight with Moscow has been a top priority for the Swedish government.

U.S. Navy SEALs linked up with Swedish special operations forces off the Baltic Sea coast in November to practice, among other things, guerrilla warfare in case of a Russian invasion. And in December, the parliament approved a bill to boost the Swedish military budget by 40% between 2021 and 2025 – which the defense minister called Sweden’s “largest investment since the 1950s.”

Even as hawks applauded the move, however, it left some supporters of the country’s signature feminist foreign policy concerned. The expansion of the nation’s military industrial complex could mark a step backward – reinforcing, in their eyes, an old-fashioned vision of security wedded to amassing arms and marshaling troops.

“Suffice it to say that, as a feminist, it is always worrying when priorities shift from diplomatic to military means,” says Annick Wibben, professor of gender, peace, and security at the Swedish Defense University. “We will be on the lookout for ways this could indicate a further remilitarization of foreign and security policy in Sweden.”

Should this be the case, it is likely to fuel further debate about whether this military buildup – a “no-brainer” for realpolitik aficionados – is compatible with feminist foreign policy. Given that an expanded military absorbs big money that could be spent on other measures of societal progress, is there such a thing, analysts wonder, as a feminist defense policy?

Photography that opens doors – and minds

“Talking about security in a different way”

Sweden became the world’s first country to declare a feminist foreign policy in 2014. The goal, creators said, is to promote participation of women in politics in general and in peace processes in particular, while at the same time building them up economically. It is also a pioneer of gender budgeting, which routinely takes into account the impact of economic decisions including, say, tax reform, on gender equality.

The new military spending hike, slated to go into effect later this year, will be the nation’s largest since the dawn of the Cold War. Designed to counter an “imminent threat” from Russia, the money will be used to buy fighter jets, artillery, and a new submarine, as well as to grow Sweden’s forces by 50%, from 60,000 to 90,000 troops.

This military expansion, “for the defense community, was an absolute no-brainer,” says Robert Egnell, vice chancellor of the Swedish Defense University. “It was clearly a turn to a traditional analysis of the security situation in the region, based on a threat assessment of Russia that’s really concerning to Sweden – and I don’t think they even gave feminist priorities a thought in that.”

From the perspective of women’s rights advocates, “this was a failure,” he adds, noting that there was a sense of “‘you promised us a feminist foreign policy, and this doesn’t include using violence for security.’”

What it should entail, says Corinna Horst, senior fellow at the German Marshall Fund in Brussels, is “talking about security in a different way. It’s no longer just boots on the ground – military stuff and tanks.” It’s also climate change and radicalization, as well as seemingly domestic issues like the pandemic and migration, she says.

On that last point, for example, when Sweden opened its borders to immigrants in response to the tragedy of the Syrian war, it also potentially affected the status of women in a way the nation had failed to anticipate, says Valerie Hudson, professor of international affairs and director of the Program on Women, Peace, and Security at Texas A&M University.

Stockholm welcomed unaccompanied minors without restriction – widely agreed to be the right thing to do. But 85% of those claiming this amnesty were men, which has shifted the sex ratio among young adults in the country to 123 men per 100 women. “Now they actually have a ratio that’s far worse than China’s,” which stands at 117 men per 100 women, Dr. Hudson notes.

Higher male ratios are historically associated with a more martial spirit on the international front and, domestically, less socioeconomic mobility for women, and more crime against them, she adds. “It morphed into a national security debate in Sweden about, ‘Wait a minute – what have we done to women?’”

The hope is that by making more women architects of policy and strategy – in other words, leaders – it will keep them from being victims of it. In the Swedish military, this has included an effort to grow female commanders from the ground up.

To show recruits that they’re striving for gender equality, the government has launched some edgy ad campaigns with slogans like “Come as you are” and “We don’t always march straight.” The goal is that by 2025 at least 30% of all new troops will be women, “breaking up the male monopoly,” as one official put it.

In the meantime, the draft, which was abolished a decade ago and brought back in 2017, will now include female conscripts. The question is whether all this will lead to new ways of thinking about defense. “Just adding more women” doesn’t inherently change things, says Dr. Horst. “Women have been socialized in the same context as men, and can propagate the same social values and norms that we’ve had for years.”

While up until now female leaders have had “great impact” within the military in terms of “how inclusive the culture is to diversity,” there hasn’t been any challenge to the “inherent logic of confrontation,” says Dr. Egnell. “I wouldn’t say that it’s had an impact on traditional threat analysis. It doesn’t mean we look at Russia with a different lens, or that we have a feminist perspective in how we approach defense.”

Yet this is precisely the “big prize,” says Dr. Hudson: for increased female participation to drive “a more inclusive understanding” of what constitutes security – and what constitutes a threat.

As the ranks of women grow, there appears to be a tipping point when strategic thinking starts to change. “There’s solid social evidence that when women reach the threshold of 30%, we start to see differences in decision-making,” says Rachel Vogelstein, director of the Women and Foreign Policy Program at the Council on Foreign Relations.

While men are quicker to take risks with lives, for example, they tend to be more hesitant when it comes to taking risks with the economy. The opposite is true for women, she adds – research born out by the response of woman-led nations like Germany and New Zealand to the coronavirus epidemic, versus male-led nations like the United Kingdom and the United States.

A feminist military posture might put a heavy emphasis on, say, defense procurement, but very little on power projection. “Maybe women feel less entitled,” Dr. Hudson muses. “I’m a mom, and it resonates with me for sure: I don’t want what you have – but just try to come into my house.”

In Sweden, pandemic inspires new generation to return to church