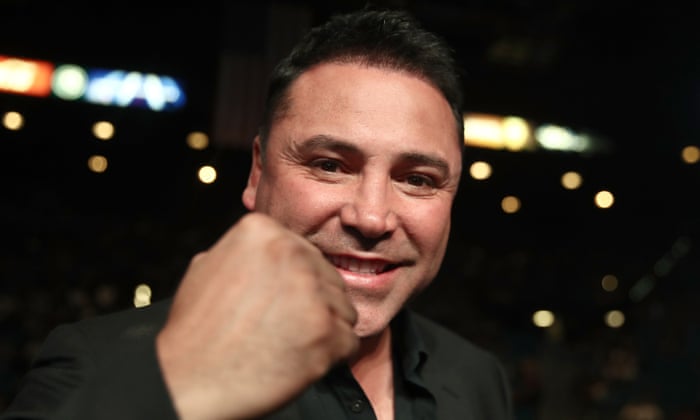 It has always been tough to tell if Oscar De La Hoya is smiling because he feels blessed to be alive or because he has something to sell. With teeth as white as his it is as easy to fix a grin as not and in pandemic-gripped boxing, there has not been much to smile about.

In a Zoom conversation from his home in California, the Golden Boy smiles pretty much from start to finish. He has two items to sell, as it happens: his unbeaten young lightweight, Ryan García, who fights Luke Campbell for the interim WBC lightweight title in Dallas on Saturday, and himself.

After declaring García could be a bigger star than he was, De La Hoya confirms he wants to box again, perhaps against Gennady Golovkin. Before GGG’s successful extension of his own career this month, he all but threatened to kill De La Hoya if they shared a ring. They have history. This, surely, was not a good career move for someone who turns 48 in February and has not fought in 12 years.

He generated $700m as a fighter and it is said he has hung on to more than $200m of it. So money should not be an issue. “It is a serious proposition. The main reason is because I love it and I miss it,” he says, beaming like a man given the choice of reliving his past or listening to Barry Manilow for the rest of his life.

A Golovkin fight is wildly optimistic. Even at 38, he is formidable enough coming off an excellent win over the younger, unbeaten Kamil Szeremeta to stay in the mix for a third fight with boxing’s pound-for-pound best, Saul ‘Canelo’ Álvarez – whom De La Hoya promoted until they split this year. 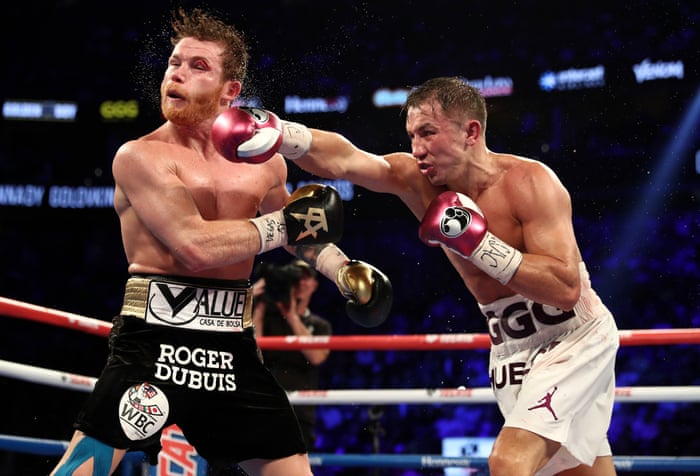 “Golovkin is a very strong fighter, but I’ve always said if he fights Canelo one more time, he’s very, very vulnerable, because Canelo looked amazing [beating Callum Smith in 12 one-sided rounds]. He looked fast, he looked strong. Doesn’t throw enough punches, like [Julio] César Chávez, but he gets the job done. But, yes, he is a consideration, Golovkin.”

Once a fighter, always a fighter? “Exactly!”

Except that is only true in the imagination. What De La Hoya is contemplating is public self-destruction to scratch an itch – which is why he came out of retirement to fight Manny Pacquiao in 2008 and got his butt kicked for the seven rounds it lasted.

“For the last maybe six, seven months I’ve been feeling great,” he says. “My body fat is very low. I’m maybe 10 pounds [from] where I want to be. Right now I’m 170. I just want to make sure that when I start sparring I don’t get injured.”

De La Hoya is inspired by Mike Tyson’s exhibition “draw” against Roy Jones Jr a month ago, 15 years after Kevin McBride finished his real career. “What Mike Tyson did was very inspirational,” he says. “He looked great. He looked like the old Mike Tyson, against a fighter who at one point was the best on the planet.”

The screaming caveat is “at one point was”. De La Hoya concedes Tyson’s reflexes “were a little off” but adds: “If you give your body, your mind, your soul enough time to prepare for a fight you can do it – if you’re injury-free.”

Oscar’s world is full of ifs. But he draws strength from another legend who briefly did come back, albeit in better circumstances. Before Sugar Ray Leonard beat Marvin Hagler in 1987, he spent 12 months having real fights behind closed doors, with 10oz gloves and no headgear to simulate the feel of combat again.

“I would do [that]. I would stage some real fights in the gym, no headgear, smaller gloves – just to make sure everything is OK. It would be against a real fighter, an active fighter. I fought the very best in the prime of my career, so I wouldn’t do any different.”

In a 16-year career that persuaded The Ring magazine to rate him the 14th of all time, De La Hoya outclassed the best of his era: César Chávez (twice), Pernell Whitaker, Héctor Camacho, Ike Quartey, Rafael Ruelas and Genaro Hernández among many others. Only the best beat him: Felix Trinidad, Shane Mosley (twice), Bernard Hopkins, Floyd Mayweather Jr and Pacquiao. In victory and defeat, age played a part. It always does. 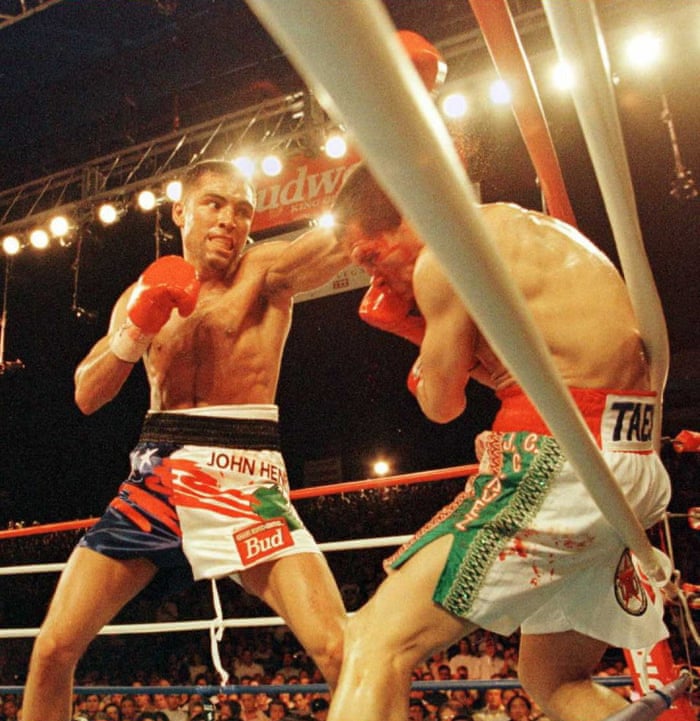 Back in the real world, he sees the striking similarities between himself and García, a Californian Mexican with flashing fists, good looks and an astonishing fanbase. “He’s a very confident young kid with a lot of abilities. I strongly feel Ryan García is probably the hardest worker in boxing today. He loves what he does. He knows what he wants – and I believe he’s gonna be successful at it.”

There is growing sentiment García, whose fight with Campbell is live on streaming channel DAZN, could be everything De La Hoya says he will be. But there are traps, as De La Hoya discovered, distracted at the height of his celebrity. “It’s extremely difficult when the whole world is telling you you’re going to be great. I believe he’s destined to become the most popular fighter on the planet. He only has, like, 7.5m [Instagram] followers at the tender age of 22, so I imagine when he’s like Canelo, at 30 years of age, [he will] have 30, 40 million followers, easily. 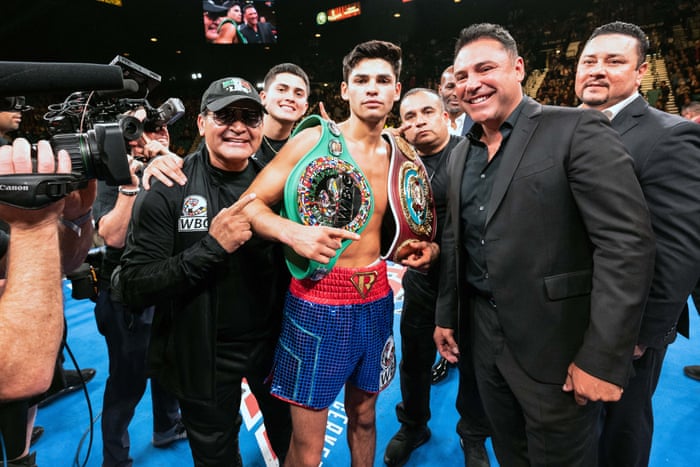 “Everybody is talking about how special he’s gonna be and how special he is. I’m thinking as a fighter now, if I were in his position, I would feel a little nervous, maybe a little: ‘Wow, am I going to live up to this expectation? It makes me work harder, it makes me focus more on what I want to accomplish over the years.’ That pressure is going to lead him to become great. He’s a big 135-pounder. I believe he can get up to 154 … maybe 160?”

De La Hoya, as promoter, is bound to acknowledge Campbell will be a worthy challenger, given the 33-year-old Yorkshireman has mixed at a much higher level as a professional over a far longer time and comes to the contest bursting with confidence.

“Luke Campbell is a very, very dangerous fighter for anyone. He has an Olympic gold medal, he’s very dedicated, devoted to his craft. Luke Campbell is the same height as Ryan García. He’s a southpaw, he’s gonna present some problems. It’s not gonna be easy. Ryan has to be on his A-game.”

De La Hoya’s smile illuminates our Zoom farewell and I’m left wondering if it is still there after he clicks the “leave” button, a blunt metaphor for his boxing life. Perhaps the oldest Golden Boy in town is gambling he has nothing to lose but his teeth.