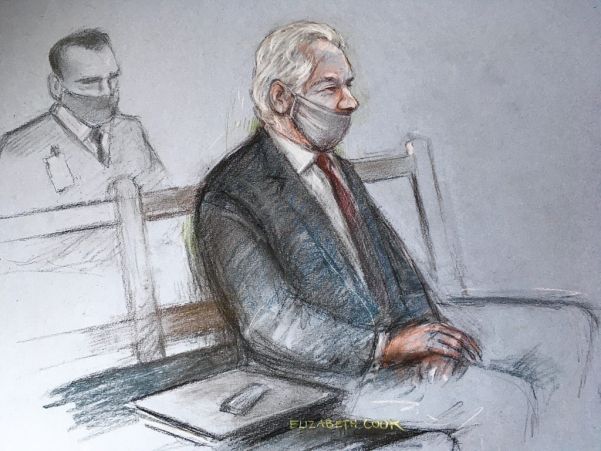 WikiLeaks founder Julian Assange has won his fight to avoid extradition from Britain to the United States.

District Judge Vanessa Baraitser said at the Old Bailey on Monday that, due to the real risk of suicide, the 49-year-old should not be extradited by “reason of mental health”.

Assange wiped his brow after the decision was announced while his fiancee, Stella Moris, with whom he has two young sons, wept, before she was embraced by WikiLeaks editor-in-chief Kristinn Hrafnsson.

The US government has given notice it will appeal the decision and has two weeks to lodge grounds, while Assange has been remanded in custody ahead of a bail application.

He is wanted to face an 18-count indictment, alleging a plot to hack computers and a conspiracy to obtain and disclose national defence information.

The case followed WikiLeaks’ publication of hundreds of thousands of leaked documents in 2010 and 2011 relating to the Afghanistan and Iraq wars, as well as diplomatic cables.

Prosecutors say Assange helped US defence analyst Chelsea Manning breach the Espionage Act in unlawfully obtaining material, was complicit in hacking by others, and published classified information that put the lives of US informants in danger.

Assange denies plotting with Manning to crack an encrypted password on US Department of Defence computers and says there is no evidence that anyone’s safety was put at risk.

His lawyers had said he faced up to 175 years in jail if convicted, although the US government said the sentence was more likely to be between four and six years.

Assange has been held in high security Belmarsh prison since he was carried out of the Ecuadorian embassy in London by police before being arrested for breaching his bail conditions in April 2019.

The defence legal team argued that the US prosecution is political and said Assange, who has been diagnosed with Asperger’s syndrome and severe depression, is a high suicide risk if he is extradited.

Assange, who sat in the dock of Court 2 in a blue suit and wearing a green face mask below his nose, closed his eyes repeatedly as the judge read out her ruling, rejecting a string of defence arguments, including freedom of speech and that the prosecution was politically motivated.

She said: “If the allegations are proved then the agreement with Ms Manning and other groups of computer hackers took him outside any role of investigative journalism.

“He was acting to further the overall objective of WikiLeaks to obtain protected information by hacking, if necessary.”

The judge said Assange’s dealings with Ms Manning “went beyond the mere encouragement of a journalist” and that he was “well aware” of the danger to informants by disclosing unredacted names in leaked documents.

But turning to his mental health she said: “Notwithstanding the strong and constant support he received from his family and friends Mr Assange has remained either severely or moderately clinically depressed throughout his detention at HMP Belmarsh.”

She said there was a real risk he would be submitted to Special Administrative Measures and detained at the ADX Florence Supermax jail if extradited.

“I’m satisfied that Mr Assange has the intellect and determination to circumvent suicide prevention measures,” the judge said in her ruling.

“Faced with the conditions of near total isolation without the protective factors which limited his risk at HMP Belmarsh, I am satisfied the procedures described by the US will not prevent Mr Assange from finding a way to commit suicide and for this reason I have decided extradition would be oppressive by reason of mental health and I order his discharge.”

He said he wished to set out the current situation in Belmarsh jail where Assange has been held and stringent bail conditions which Assange could be subjected to to reassure the prosecution he would not abscond.