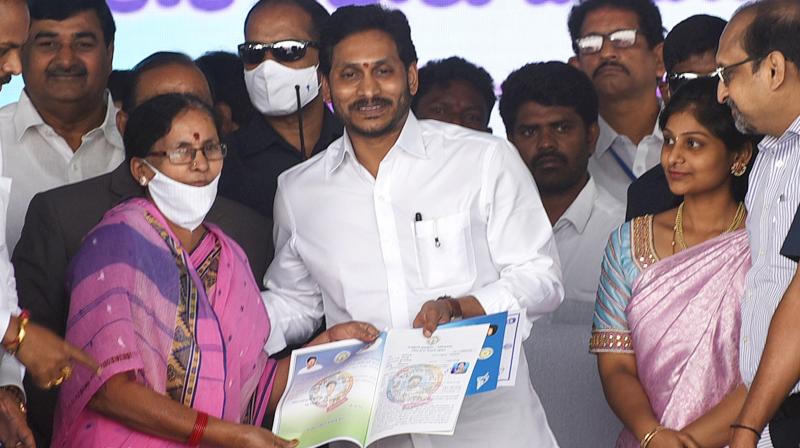 Vizianagaram: Chief Minister Y.S. Jagan Mohan Reddy said on Wednesday that he has fulfilled 95 per cent of the pre-poll promises made to the people during the 18 months of the YSRC rule.

Addressing a gathering after unveiling the pylon for the YSR Jagananna Colony at Gunkalam near here, the largest housing layout across the state, he reiterated that the government was not just constructing houses but also building towns for the future.

The CM said the market value of each house plot in Gunkalam was worth `3 lakh. Its value would increase to 6-7 lakh by the time the houses and other basic infrastructure are ready. "All these houses are being given free to the beneficiaries, and the sole aim is to help them lead a better life," he said.

In Vizianagaram, the layout is spread across 400 acres and this would house 12,301 families.

The chief minister said that about 30.75 lakh free-housing project beneficiaries have been identified across the state, For them, 28.30 lakh houses will be constructed under the YSR Jagananna layouts in two phases and another 2.62 lakh would be in the form of TIDCO flats.

He said the government has been implementing several welfare activities. In the past 18 months, 43 lakh women were benefited from the Amma Vodi, 25 lakh women received Cheyuta, 62 lakh beneficiaries are getting pensions on the first day every month, over 50 lakh farmers were benefited through the YSR Rythu Bharosa, and 1.35 crore families have availed health services through the YSR Aarogyasri.

The Chief Minister came down heavily on Opposition leader N . Chandrababu Naidu and his men, saying they were stalling distribution of 54,000 house pattas to the poor in Amaravati by moving courts and citing demographical imbalance.

The Chief Minister said the first phase of the Uttarandhra Sujala Sravanti was progressing with an outlay of `2,000 crore and the state government recently sanctioned `4,134 crore for the second phase. After completion of both the phases, around four lakh acres of land would be irrigated.

Georgia’s Raffensperger says he ‘never believed’ it appropriate to discuss election with Trump, hints at probe

No need for CM to give declaration on religion at Tirumala, rules AP High Court