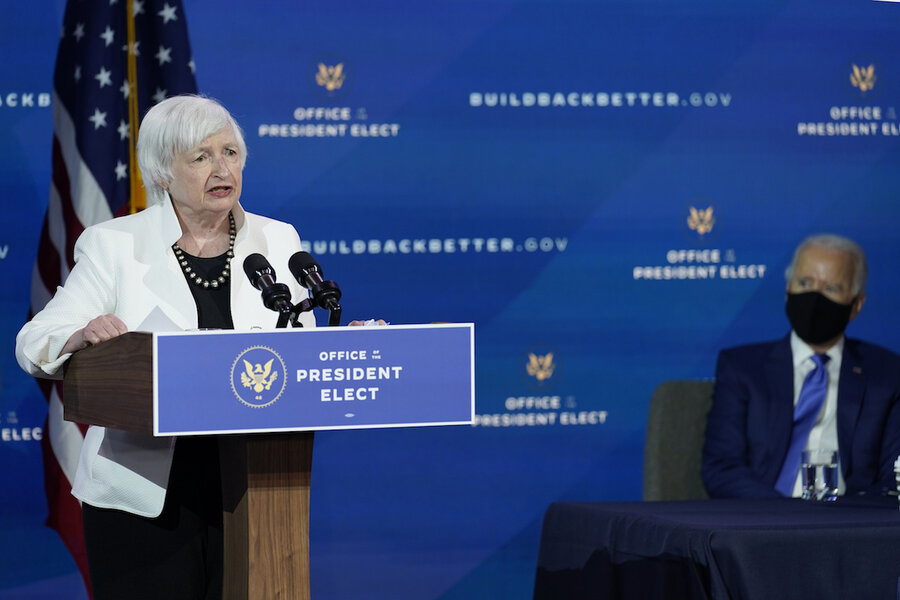 Janet Yellen, President-elect Joe Biden’s choice for treasury secretary, collected more than $7 million in speaking fees over the past two years from major financial firms and tech giants including Citigroup, Goldman Sachs, and Google, according to disclosure forms filed as part of her nomination.

Ms. Yellen’s was among three financial disclosures turned in by Biden transition officials that were made public on Thursday by the Office of Government Ethics. In a separate filing, Ms. Yellen listed firms and banks where she had received speaking fees and said she intended to “seek written authorization” from ethics officials to “participate personally and substantially” in matters involving them.

Her selection by Mr. Biden to lead the Treasury Department has been cheered by progressive Democrats, who support Ms. Yellen’s work as a labor economist who has long prioritized combating economic inequality. Since her nomination was announced, Ms. Yellen has pledged to work to fight systemic racism and climate change in her role as treasury secretary.

But receiving steep payments from Wall Street bankers and other powerful corporations could become an issue as her nomination works its way through a closely divided Senate. Hillary Clinton faced criticism from the left wing of the Democratic Party while running for president in 2016 for having received lucrative speaking fees at Wall Street firms.

A Biden transition spokesperson said Friday that, since leaving the Fed, Ms. Yellen has “spoken at economic conferences, universities, and to business groups and financial institutions about her experiences and her views on what we can do as a country to build a stronger economy and increase our competitiveness.” He added that “this is not someone who pulls punches when it comes to bad actors or bad behavior.”

Some advocacy groups began warning just after Election Day that Mr. Biden, who was a senator from Delaware for 36 years and served as vice president for two terms, could rely too heavily on officials with strong ties to past Democratic administrations. Many of those left public sector posts for jobs in the private sector and are now seeking to return to government, raising concerns about the “revolving door” between policy and corporate and financial influence.

Mr. Biden, however, has largely shrugged off such concerns, saying he’s not afraid to rely on advisers with deep governmental experience. He’s pledged to assemble a Cabinet well versed in the workings of government and full of members from across the racial and ideological spectrum who look like the diverse country they will represent.

The transition spokesperson said Mr. Biden’s incoming administration is committed to “restoring trust in government by establishing an administration of the highest ethical standards” while calling the release of financial disclosures “merely one step in the process of ensuring the highest degrees of transparency and ethics.”

“In the last few years, she has shared her views in a range of forums – congressional testimony, media interviews, speaking engagements, and opinion pieces,” Mr. Wyden said in a statement. “She’s been fully transparent.”

Also released Thursday were disclosure forms from Mr. Biden’s choice to be secretary of state, Antony Blinken, who detailed his work at a consulting firm he co-founded, WestExec Advisors, LLC. They show that Mr. Blinken was paid more than $1.1 million and has entered into an agreement, negotiated in October, to sell his equity interest in the firm, where he advised clients including Bank of America and Facebook.

Avril Haines, Mr. Biden’s choice to be national intelligence director, disclosed being a consultant at WestExec Advisors and collecting around $55,000 in fees between October 2017 and last summer. In a separate letter to ethics officials, Ms. Haines promised to recuse herself for one year in issues involving WestExec as well as her other past employers, including Columbia University, Syracuse University, and the Brookings Institution think tank.

Mr. Biden’s transition team says it expects to announce more Cabinet picks this week. Among those positions yet to be filled are the president-elect’s selection for labor secretary and attorney general – a choice that could be complicated by federal prosecutors investigating the finances of Mr. Biden’s son Hunter.

Republicans in Congress battle each other over election results